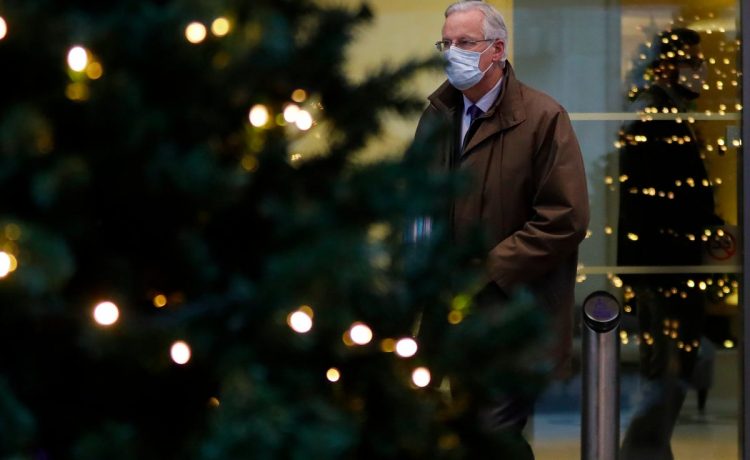 rexit talks have stretched late into the night as both sides fought their corners with the clock ticking down to the deadline for a trade deal.

Several boxes of pizza were delivered to the talks venue on Wednesday night as officials from London and Brussels tried to hammer out an agreement.

The last-ditch discussions come ahead of the end of the transition period on December 31.

The negotiations continued after Boris Johnson insisted the UK’s “bottom line” on a post-Brexit trade deal is to “take back control”.

The Prime Minister said he was “absolutely committed” to trying to secure a deal “if we can” amid warnings talks with the EU have reached a “make or break” point.

The EU’s chief negotiator Michel Barnier briefed ambassadors from the 27 member states on the latest negotiations amid little sign of progress on the key issues.

He was said to have warned that significant differences remain over fisheries, state aid rules and the governance arrangements for any agreement.

The current trading arrangements expire at the end of the month, and failure to reach a deal would cause significant economic disruption.

The German MEP David McAllister, of the European parliament’s Brexit co-ordination group – which also met Mr Barnier, said they had reached a “critical moment” in the negotiations.

He said agreement needed to be reached “within very few days” if the parliament and the member states were to complete the necessary “procedures” before the end of the Brexit transition period at the end of the year.

“This is the critical moment where principles need to be translated into rules and, more importantly, rules need to be guaranteed by a robust enforcement framework,” he tweeted.

At a Downing Street press conference, Mr Johnson said: “I think our friends know what the UK’s bottom line is and what people voted for on June 23, 2016 – they voted to take back control.

“It’s about making sure that the UK is able to run its own laws, its own fisheries and so on.”

However, she said that he remained “comfortable” that Britain would continue to thrive if it failed to get an agreement and was forced to move to dealing with the EU on World Trade Organisation terms.

“The talks are right now ongoing and he has greatest confidence in David Frost and the team,” she told a briefing for Westminster reporters.

“He is optimistic but he has also always said that’s he is confident and comfortable that we would be okay without a deal.

“If a deal can be struck that is all to the good but he is also confident that we can move towards trading on what he calls Australia terms.”

While both sides have acknowledged that time is running out, there has been no sign that either is prepared to make a decisive move that could resolve the issue one way or the other.

On Tuesday, French President Emmanuel Macron sounded a warning that he would not accept an agreement that “would not respect our interests in the long term” amid concerns in Paris that Mr Barnier is preparing to give ground over fishing rights.

Meanwhile, the shadow cabinet is split on backing a Brexit deal, according to reports.

Up to 60 Labour MPs could rebel on supporting such a move if Labour leader Sir Keir Starmer insists on it, according to the Guardian.

Shadow chancellor Anneliese Dodds is in favour of abstaining in such a vote, the newspaper suggested.