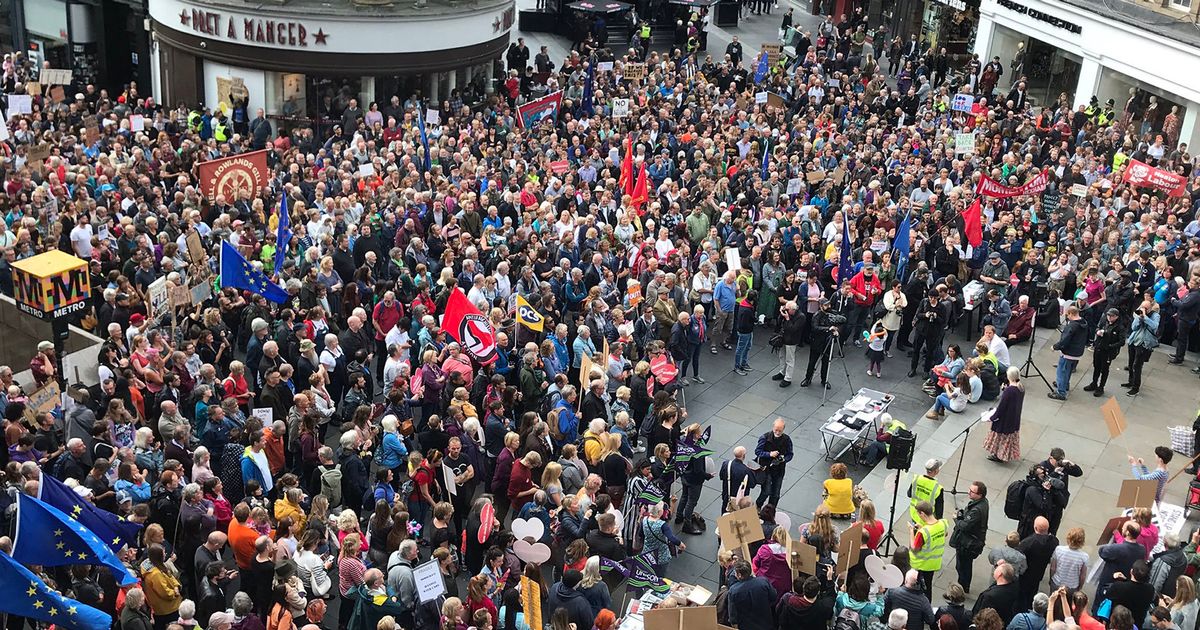 Hundreds are gathering armed with placards with more than 30 events planned across the country.

Protesters have already brought London’s Whitehall to a standstill – with people stretching across much of the usually busy road as they gathered outside the gates of Number 10.

Chanting of “Boris Johnson shame on you”, was punctuated by the clanging of a bell, blowing of whistles and bang of a drum echoed around the surrounding Government buildings.

As the chanting outside Downing Street continued, many protesters got creative with their descriptions of the Prime Minister.

Shadow home secretary Diane Abbott also addressed the large crowd from a stage positioned near Number 10, and said Labour leader Jeremy Corbyn had sent his support for the demonstration.

Ms Abbott tried to rally those in front of her with the cry of “What do we want to do” – expecting a reply of “stop the coup” – but many shouted “Where is Jeremy?” in response to the Hackney North MP.

She added: “We cannot allow Boris Johnson to shut down Parliament and to shut down the voice of ordinary British people.”

As she highlighted how the Tories “thought they could get away with it” and how the protesters are there to say they will not, there were sporadic cries of “how?” from those in crowd.

In Shrewsbury, some 200 people gathered in a spontaneous rally against Prime Minister Boris Johnson’s controversial plans.

While in Belfast, a small crowd was gathered in front of City Hall by 11am.

The diverse gathering included foreign nationals concerned about their status post-Brexit, and local people angered by the move to prorogue Parliament.

Organisers urged fellow demonstrators to stay as long as they could and spread word of the protest on social media.

More than 1,000 people gathered in the centre of York to listen to speakers outside the famous Bettys tea rooms and The Ivy restaurant.

Many of those in St Helen’s Square were carrying banners as well as EU and Yorkshire flags and hats.

First speaker Rachael Maskell – the Labour MP for York Central – was heckled by a lone Leave supporter from the centre of the crowd, who then argued with protesters around him.

But he left without further problems as a small number of police officers looked on.

Anti-Brexit campaign group Another Europe Is Possible has planned 32 ‘StopTheCoup’ protests to take place in England, Scotland and Wales.

And left-wing group Momentum is calling on its members to “occupy bridges and blockade roads” in conjunction with unrest on the streets.

Chris McHugh, from Gateshead, attended a protest in Newcastle he said was about “protecting democracy”.

The 33-year-old, who works for Labour MP Liz Twist, said: “The fact that thousands have taken to the streets of Newcastle today is so telling.

“People from all walks of life have come together… there’s a real sense of unity, whether you voted Leave or Remain, this is about protecting the very fabric of our democracy.”

Shadow chancellor John McDonnell urged Labour MPs to join the nationwide protest, calling the Prime Minister’s decision to close Parliament for up to five weeks an attempt “to shut down democracy”.

“As elected Labour MPs across the country represent their constituents by joining in these protests, I urge other MPs to think of their constituents whose jobs and livelihoods will be put at risk in a no-deal Brexit ,” Mr McDonnell said.

“If Boris Johnson wants a mandate, then he should call a general election and put it to the people.”

The shadow chancellor is due to address youth movements at the main London protest at Downing Street on Saturday.

There will be rallies in smaller places including Bodmin, Cornwall, and Clotheroe, Lancashire, as well as Amsterdam’s Dam Square and the outside the British Embassy in Riga, Latvia.

And the annual Westminster Dog of the Year competition, due to take place on Thursday, has been cancelled over safety concerns of the dogs and MPs taking part.

Both pro and anti-Brexit protesters clashed on Wednesday after the Queen approved an order that will see Parliament suspended for more than one month.

“There are thousands of people from all over the UK and across the political spectrum who will protest to stop Johnson closing the doors on our democracy,” she said.

Despite insisting during the Tory leadership campaign that he thought proroguing Parliament was a bad idea, Mr Javid has now insisted the Government needs time to focus on its agenda in the run-up to outlining plans in October’s Queen’s Speech.

Pressed on his comments during the Tory leadership battle that prorogation could be seen as “trashing” democracy, the Chancellor said: “I wasn’t being asked about a Queen’s Speech, a Government setting an agenda, that was a question around suspending Parliament for the sake of it for months on end in order to avoid debate.”

Mr Johnson defended his decision and warned that efforts to frustrate Brexit on October 31 would be seized on by Brussels to avoid offering a good deal.

“I’m afraid that the more our friends and partners think, at the back of their mind, that Brexit could be stopped, that the UK could be kept in by Parliament, the less likely they are to give us the deal that we need,” he said.