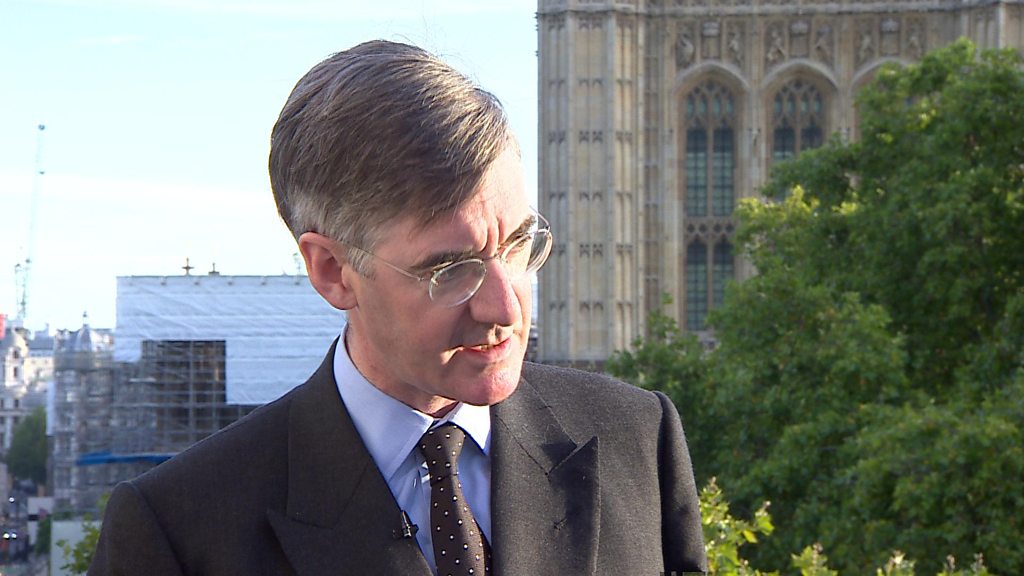 Outrage over the government’s decision to suspend Parliament is “phoney”, Leader of the House of Commons Jacob Rees-Mogg has said.

He also denied it was part of a bid to “railroad” through a no-deal Brexit.

But government whip Lord Young has resigned in protest, arguing the move risks “undermining the fundamental role of Parliament”.

And a Scottish court hearing is under way which could block the suspension of Parliament.

The prime minister’s decision sparked criticism from those who argue Boris Johnson is trying to prevent MPs from blocking a no-deal Brexit.

The government said the five-week suspension in September and October will still allow time to debate Brexit.

Commons leader Mr Rees-Mogg said the outrage was “phoney”, and that the move was “constitutional and proper”.

“The candyfloss of outrage we’ve had over the last 24 hours, which I think is almost entirely confected, is from people who never wanted to leave the European Union,” he told BBC Radio 4’s Today programme.

“This is the greatest period of anger for them, or of confected anger, because after 31 October we will have left,” he added.

Conservative peer Lord Young of Cookham resigned from his role as government whip in the House of Lords in protest at the suspension, known as prorogation.

In his resignation letter, he said the timing and length of the suspension “risks undermining the fundamental role of Parliament at a critical time in our history”.

Meanwhile, Ruth Davidson has also confirmed she is quitting as leader of the Scottish Conservatives after eight years in the job.

READ  Europe is fed up with Brexit, but it’s still best for all if Britain stays in | Timothy Garton Ash

In a statement she said “much had changed” both politically and personally during that time, which had led her to tender her resignation.

Ms Davidson – who backed Remain in the 2016 EU referendum – added she had never sought to hide the “conflict” she felt over Brexit, and urged Mr Johnson to get a Brexit deal.

On Wednesday, Mr Johnson said a Queen’s Speech would take place after the suspension, on 14 October, to outline his “very exciting agenda”.

Mr Rees-Mogg said this parliamentary session had been one of the longest in almost 400 years, so it was right to suspend it and start a new session.

MPs voted by 498 votes to 114 to leave the EU by triggering Article 50 in February 2017. That began the countdown to the UK’s departure, which is due on 31 October.

But Ruth Fox – director of parliamentary experts the Hansard Society – said this prorogation was “significantly longer than we would normally have” for the purpose of starting a new parliamentary session.

Ms Fox said that depending on the day the suspension began – and on whether MPs would have voted to have a party conference recess at all – the prorogation could “potentially halve” the number of days MPs have to scrutinise the government’s Brexit position.

The prime minister says he wants to leave the EU at the end of October with a deal, but is willing to leave without one rather than miss the deadline.

What has been the reaction from politicians and campaigners?

On Wednesday, Labour leader Jeremy Corbyn described Mr Johnson’s move as “a smash-and-grab on our democracy” in order to force through no-deal by leaving MPs without enough time to pass laws in Parliament.

Conservative MP Ken Clarke called Mr Johnson’s move “outrageous conduct”, while the leader of the Liberal Democrats, Jo Swinson, told BBC Newsnight that the prime minister “is prepared to deny people their voice through their representatives in Parliament to force through a no-deal Brexit”.

Others, though, have defended the plan.

Former Cabinet Office minster Damian Green tweeted that there was time to ratify a deal with the EU before 31 October, saying: “This is all normal Parliamentary democracy, which shows that the talk of coups and dictatorship is massively overblown.”

The leader of the DUP, Arlene Foster, also welcomed the decision, but said the terms of her party’s agreement with the Conservatives would now be reviewed.

What reaction has there been elsewhere?

Meanwhile, an e-petition on the government’s website demanding Parliament not be suspended reached more than a million signatures in less than a day.

A snap YouGov poll conducted on Wednesday suggests 47% of British adults thought the decision was unacceptable, with 27% saying it was acceptable and 27% unsure.

But it suggested the suspension was supported by 51% of people who voted Leave, with 52% of Conservative voters also approving of the move.

What happened on Wednesday?

Three Conservative members of the Queen’s Privy Council took the request to suspend Parliament to the monarch’s Scottish residence in Balmoral on Wednesday morning on behalf of the prime minister.

It has now been approved, allowing the government to suspend Parliament no earlier than Monday 9 September and no later than Thursday 12 September, until Monday 14 October.

Mr Johnson wrote to MPs to outline his plan, calling on Parliament to show “unity and resolve” in the run up to 31 October so the government “stands a chance of securing a new deal” with the EU.

What about the legal challenge?

Scotland’s top civil court is considering a challenge to the suspension of Parliament, led by the SNP’s justice spokeswoman, Joanna Cherry.

It is not possible to mount a legal challenge to the Queen’s exercise of her personal prerogative powers.

Campaigner Gina Miller has made an application to the Supreme Court, seeking permission for a judicial review of the PM’s decision.

She told the BBC the case would question Mr Johnson’s advice to the Queen and challenge whether he was using his powers to suspend Parliament and call a Queen’s speech legally.

Former Prime Minister John Major said he had “no doubt” Mr Johnson’s motive was to “bypass a sovereign Parliament that opposes his policy on Brexit”, and he would continue to seek legal advice.

Do you have any questions about the suspension of Parliament?

Use this form to ask your question:

If you are reading this page and can’t see the form you will need to visit the mobile version of the BBC website to submit your question.