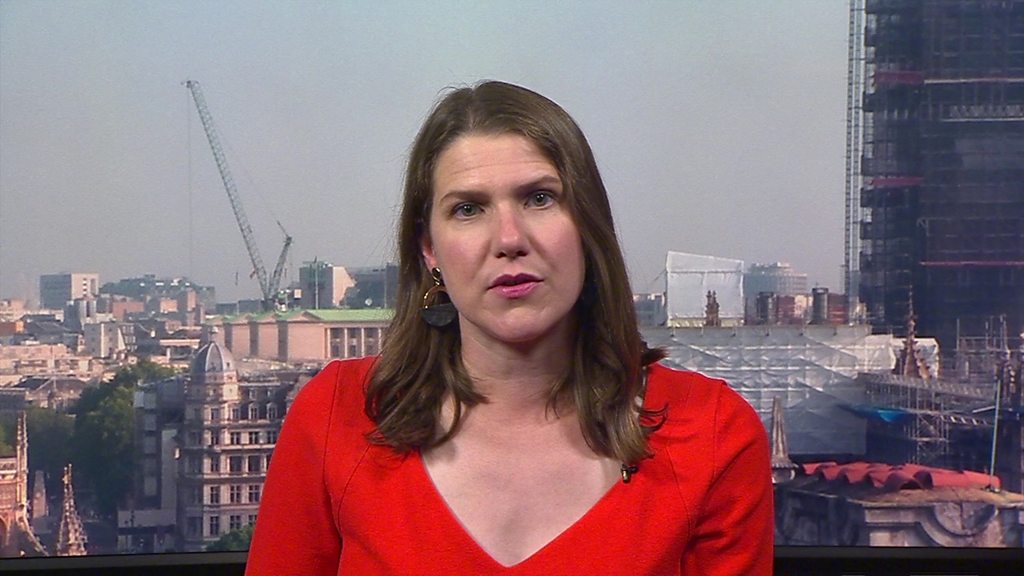 Opposition MPs say they have agreed to try to block a no-deal Brexit by passing legislation in Parliament.

In a joint statement after a meeting called by Jeremy Corbyn, MPs opposed to no deal did not detail how or when such an attempt would be made.

They also said using a vote of no confidence to bring down the government remained an option.

A Downing Street source accused them of “seeking to sabotage the UK’s position” in talks with the European Union.

Those talks were “now making progress”, the source added.

The UK is set to leave the EU by 31 October and Prime Minister Boris Johnson has promised to stick to that date even if he cannot agree a deal with Brussels.

Green MP Caroline Lucas said “the legislative way forward” was “the most secure way to extend Article 50, to get rid of that 31 October deadline” and stop a PM “careering towards” no deal.

How could MPs block no deal through law?

At present, the default position in law is that the UK leaves the EU on 31 October with or without a deal.

In April, faced with the possibility of a no-deal exit on the original Brexit date of 29 March, MPs passed a law forcing former PM Theresa May to request an extension of the UK’s EU membership.

Many expect that is what they would hope to do again, but it would require MPs against no deal to first take control of the parliamentary timetable to make time for the law change to be debated.

One way to do that would be to amend a motion debated as part of an emergency debate in the Commons.

Emergency debate motions – topical matters added to business at short notice – are normally considered unamendable, meaning Speaker John Bercow may have to give a ruling that one is.

Anna Soubry, the leader of the Independent Group for Change, said after the meeting those gathered had agreed how they would try to use Parliament but would not discuss the details “because we know what we’re up against”.

What about a no-confidence vote?

Labour leader Jeremy Corbyn had said his preferred option to block no deal was via a no-confidence vote in the government.

Under his plan, he would replace Mr Johnson as an interim PM, call a snap election and campaign for another referendum.

However, the Liberal Democrats and some Tory MPs said they would not support any plan that saw Mr Corbyn become prime minister – even on a temporary basis.

Lib Dem leader Jo Swinson said a no-confidence vote “remains a last resort, if you like, to be able to enforce the will of Parliament, but the main proposal is going down the legislative route”.

Ms Lucas said the option of a no-confidence vote was “still there” if the legislative route did not work, but it was “a more risky strategy”.

What other reaction has there been?

The meeting was also attended by the SNP and Plaid Cymru.

The SNP’s Ian Blackford said it had been “positive and productive”, adding: “Parliament must grasp this opportunity, unite to stop Boris Johnson shutting down democracy – and be ready to use all mechanisms to block a no-deal disaster, including deploying legislation as a priority.”

Plaid Cymru leader Adam Price said his party was “committed to work co-operatively with every other opposition party and do everything in our power to avoid a catastrophic crash-out Brexit”.

The Labour leader invited five Conservative MPs opposed to a no-deal exit, but none attended.

Brexit Party leader Nigel Farage, speaking earlier in the day, criticised those who took part, saying they were “very out of touch with public opinion” and leaving the EU without an agreement was now “the only acceptable deal”.

Mr Johnson has urged the EU to re-open the withdrawal deal reached between Theresa May and Brussels, and to make key changes that would allow it to be passed by Parliament.

A No 10 source said: “It’s utterly perverse that Corbyn and his allies are actively seeking to sabotage the UK’s position.

“This coalition of anti-democrats should be honest with the British public, they are against us leaving the EU no matter what.”

In a joint statement from the parties – sent out by Labour – they agreed on the urgency to act together to find practical ways to prevent no deal, including the possibility of passing legislation and a vote of no confidence.

However, many of the opposition leaders – though not Labour – were saying the emphasis of that meeting was on the first of those options – in effect asking for an extension to the Brexit process and sending Boris Johnson back to Brussels to say he wants to get a deal after all.

But how do they do that in practical terms?

The first challenge to get some Conservative rebels on board, because some in the Labour Party (namely Brexiteers) simply won’t back it.

But with Boris Johnson still insisting he can get a deal, it could well be the case that some Tory rebels unhappy with the prospect of no deal would equally be unhappy to rush into anything that would undermine the PM at this stage.

So, it is not at all certain. And in any case, even if Mr Johnson was faced with being forced to do something against his will, he has the option of calling an election instead.