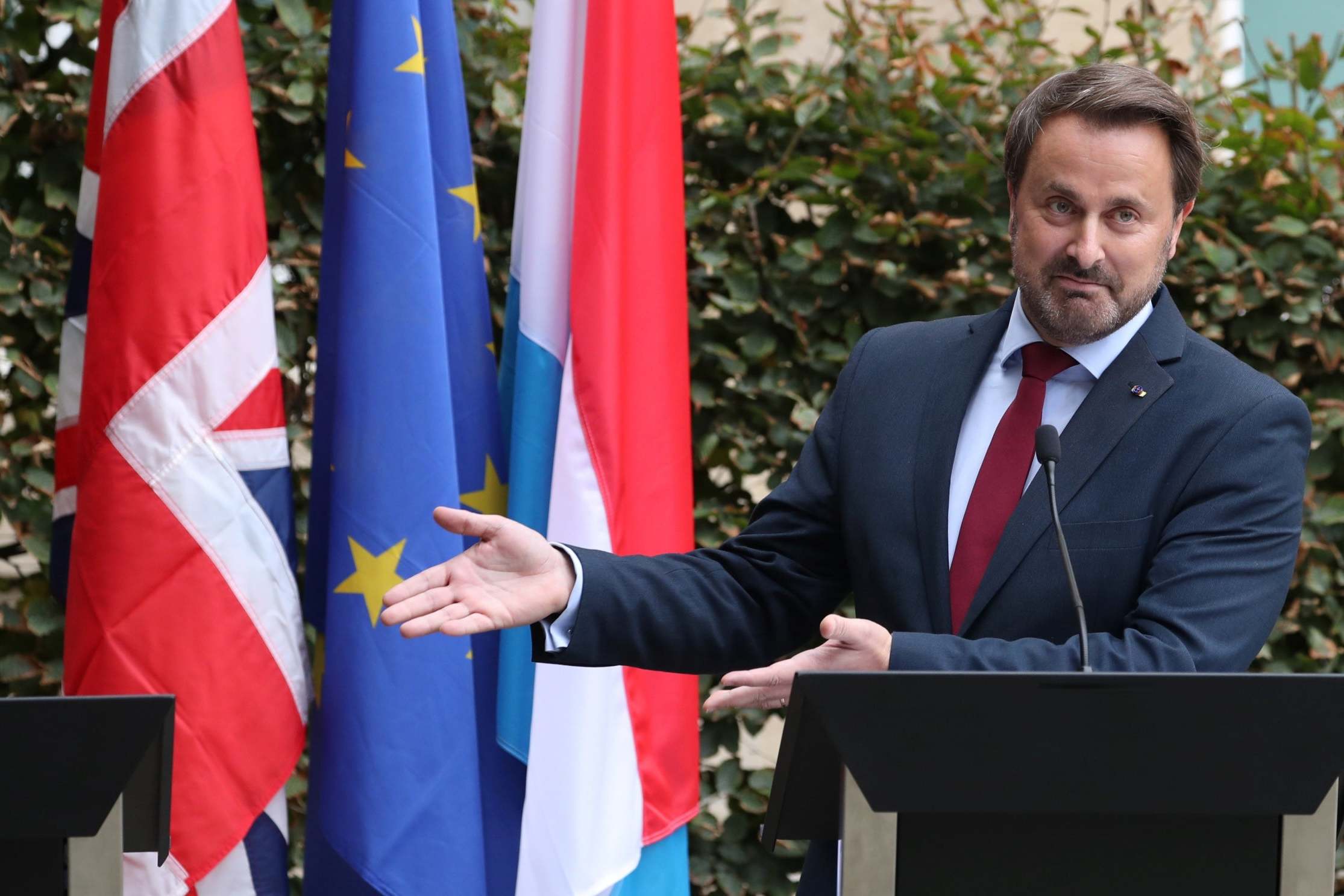 Tory MPs have rounded on Luxembourg’s leader Xavier Bettel after he took aim at Boris Johnson, who failed to appear at their scheduled joint press conference.

The small European country’s Prime Minister angered many Conservatives after going ahead with his address alongside an empty podium on Monday.

Amid chaotic scenes outside Luxembourg’s Ministry of State, Mr Johnson walked out complaining a noisy anti-Brexit demonstration made it impossible to go ahead.

To cheers from the crowd, Mr Bettel then mounted an emotional onslaught, complaining the future of citizens across the EU was being held hostage for “party political gains”.

British officials were said to have asked for the conference to have been moved inside, only to be told there was insufficient space to accommodate all the journalists present.

Pro-Brexit Tory Daniel Kawczynski said the scenes only underlined the need for Britain to get out of the “artificial arrogant EU structure” as quickly as possible.

“Luxembourg PM representing a nation smaller than Birmingham admonishing and being disrespectful to a British PM for trying to fulfil will of British people. We need to pull out of EU on October 31 without doubt!” he tweeted.

“We fund the EU to the tune of billions every year not sure what Luxembourg’s contribution has been.”

Former Brexit minister David Jones said Mr Bettel had made a “big mistake” which would appal many of his own people.

“I have no doubt that very many Luxembourgers are dismayed by their Prime Minister’s extraordinary behaviour,” he tweeted.

Even some pro-EU MPs supported Mr Johnson’s decision to walk out.

Sir Nicholas Soames, one of 21 MPs to have the Conservative whip removed by Mr Johnson for rebelling over Brexit, accused Mr Bettel of “unhelpful grandstanding”.

“Very poor behaviour by Luxembourg. Boris Johnson quite right not to be made a fool of,” he tweeted.

Conservative former defence minister Tobias Ellwood agreed that Mr Johnson had been right to “duck out” of the press conference.

“You saw the atmosphere outside the meeting. It is a bit like trying to conduct a press conference outside the Red Lion in Parliament Square,” he told BBC2’s Newsnight.

“It is the not the appropriate place to do it and I am sorry the choreography wasn’t better handled.”

At the same time, however, he acknowledged that Mr Bettel was giving voice to a widely-felt frustration over the continuing Brexit deadlock.

“Xavier Bettel illustrated the frustration that we are all feeling. It is three years since the referendum and we are still trying to secure a deal,” he said.

The row erupted as the UK’s highest court prepared to consider whether Mr Johnson’s five-week suspension of Parliament was lawful.

The Supreme Court in London will hear appeals from two separate challenges brought in England and Scotland to the prorogation of Parliament over three days, starting on Tuesday.

Mr Johnson, who also met European Commission president Jean-Claude Juncker on Monday, insisted a deal was still possible before the UK is due to leave the EU on October 31.

“We’ve got to manage this carefully. Yes, we’ve got a good chance of a deal. Yes, I can see the shape of it. Everybody could see roughly what could be done. But it will require movement,” he said.

In contrast, however, the commission said it was the UK’s responsibility to bring forward “legally operational solutions” to the issue of the Northern Ireland backstop which remains the main obstacle to an agreement.

In a statement issued after Mr Juncker’s working lunch with Mr Johnson at Le Bouquet Garni restaurant, the commission said “such proposals have not yet been made”.