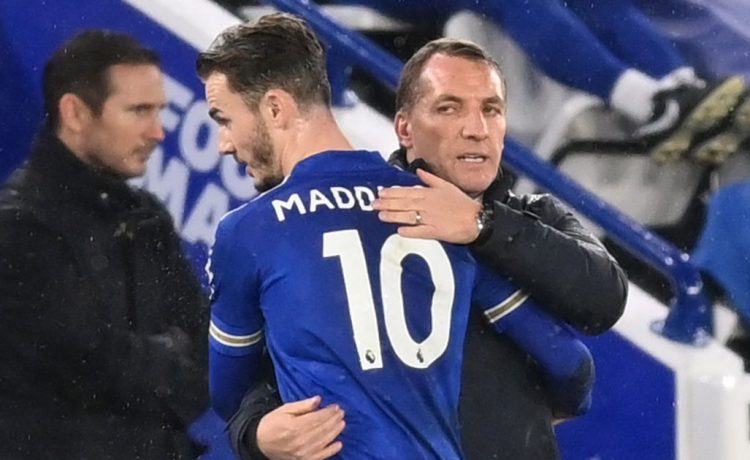 Maddison, Ayoze Perez and Hamza Choudhury were all forced to train away from the first-team group and dropped for the top-four clash with West Ham after breaching club protocols along with injured team-mate Harvey Barnes.

Rodgers spoke eloquently about the situation in the aftermath of the defeat by the Hammers and left his whole squad, and not just those involved, in no doubt about the standards he and his club expect from them.

Evans, who spent 11 years at Old Trafford, six of them in Ferguson’s first team, was asked if the clear leadership Rodgers displayed reminded him of his old boss.

He said: “You’re spot on and the way he dealt with it was fantastic.

“He’s very decisive and he let all the other players know where he stood, he was very open with his dialogue, his communication.

“As players, you can only have respect for that.

“The matter is dealt with now and it has been dealt with in the right way.

“We had a couple of days off after the last game and Friday was the second day we’ve had everyone back together.

“It has been great to have all the boys back in training and it has lifted the squad that everyone is back.

“We were also missing Caglar Soyuncu with Covid, he was having to stay in Turkey, the big players, so just to have everyone available for this game, obviously there’s still a few injuries, but people who can be available are there and we’re all delighted to have them back.

“It’s been forgotten about already, it has only been a couple of days but things move quickly in football and it’s on to the next game.”