The California wildfire season has had an awful start this year, scorching hundreds of thousands of acres, fueled by the Santa Ana winds.

These fires, which typically begin in September, spring up in hot and dry conditions that make it easy for the flames to spread and, in turn, make the blazes difficult to extinguish.

Nearly 200,000 residents have been evacuated from their homes, thousands are without power, and dozens of houses and businesses have been destroyed.

On Sunday, Governor Gavin Newsom declared a statewide emergency and said officials were deploying ‘every resource available’ to respond to the wildfires.

Even if these residents evacuate to safety from the inferno’s immediate danger, there’s a physical toll that will last long after the flames have been put out: tiny particles that enter the bloodstream and smog that irritates the lungs.

The damage these insidious little flecks can do ranges from coughing to asthma and, as time goes on, their effects even raise risks for cancer and heart disease.

DailyMail.com spoke to two climate specialists, who explained the impact wildfires have on our health and why they expect the number of people affected by the fires to swell even beyond those living in the square miles scorched each season. 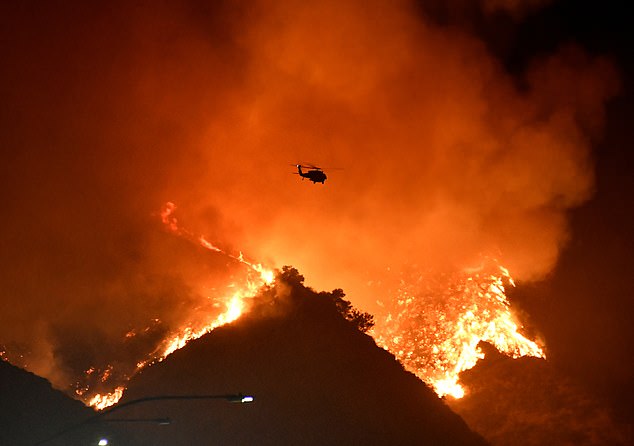 DailyMail.com spoke to two climate activists who explained the devastating health effects of breathing in wildfire smoke, including tiny particles that increase the risk of heart disease, asthma and cancer. Pictured: A firefighting helicopter flies over the Getty Fire as it burns in the hills of West Los Angeles, California on Monday

READ  Obesity should be classified as a DISEASE because it is 'not always patients' fault', scientists say

‘There is a soup of air pollution that folks are breathing in from fires.’

Dr Limaye said perhaps the most dangerous health concern surrounding wildfires is the burning of fine particulate matter, or PM2.5.

The concentration of an air pollutant is measured in micrograms (ug) per cubic meter air (m3).

These particles are so tiny that their width is about thirty times smaller than that of a human hair.

Because of how small they are, PM2.5 particles stay in the air longer than heavy particles, increasing the risk of us inhaling them.

Their tiny diameter allows these bits of material to get deep into the lungs, becoming lodged in the tissue there, and potentially entering the circulatory system.

According to the US Environmental Protection Agency (EPA), 0 to 12 ug/m3 is viewed as little to no risk.

Wildfires often leave the air with levels of PM2.5 above 35 ug/m3 – nearly three times what the EPA considers acceptable for human health.

‘[The particles] enter the lungs and bloodstream and infect a whole damage of systems in the body,’ said Dr Limaye.

‘There’s a lot of strong epidemiology on links to heart attacks, lung disease, asthma and emphysema.’

A study published earlier this year, led by Imperial College London, found that PM2.5 pollution caused 30,000 deaths in the continental US between 1999 and 2015, mostly from secondary conditions such as asthma and heart attacks.

And an October 2018 study found that PM2.5 exposure could raise the risks of mouth cancer by up to 40 percent.

Hydrogen cyanide, also known as hydrocyanic acid, is a highly volatile liquid or gas that is colorless or pale blue.

Inhaling the toxic gas can deprive nearly every organ in the body – including the brain, heart and lungs – of oxygen according to the National Institute for Occupational Safety and Health.

Without sufficient oxygen, the tissues of these vital organs will begin to die.

Hydrogen cyanide is rapidly absorbed by the lungs and can result in death within minutes if supplemental oxygen is not administered.

1. Stay inside and try to keep air inside home clean by closing doors and windows and turning off AC

4. Limit outdoors activity when the air quality is poor

5. If the air pollution is really bad, get a respirator mask, such as an N95

This is not just a concern for residents within the immediate vicinity of the fires.

According to a 2013 report from the NRDC, the area affected by smoke exposure is 50 times larger than the area burned.

For example, the smoke of the Camp Fire in 2018  extended 150 to 200 miles beyond the area it burned in Northern California’s Butte County.

And currently in Imperial County, affected by the Kincade Fires, the Air Quality Index is 163 – marked a as ‘Unhealthy for everyone.’

‘This draws attention to a problem that may seem isolated and acute, but affects millions of people in the country,’ said Dr Limaye.

Riordan and his wife are two of those people.

The couple lived southwest of the Camp Fire, and Riordan says they both developed chronic conditions in the aftermath.

‘We’ve never had any serious problems with cardiovascular health and we both have inhalers now because the smoke lasted several days and we didn’t take care enough to protect ourselves,’ he told DailyMail.com

Within a month of the Camp Fire’s first flames, both Riordan and his wife developed coughs.

‘Mine didn’t even go away for several months and hers still lingers,’ he said.

‘I don’t have to use [my inhaler] often but my wife is a landscaper so she has to use her regularly [because] physical exertion brings it on – and we got off easy.’

In the coming years, it’s all but inevitable that more and more Californians will be exposed to pollutants left behind by increasingly common wildfires, causing not just acute but chronic health problems.

According to the Center for Climate and Energy Solutions, the average wildfire season is 78 days longer.

And a study from Columbia University published earlier this year found the annual burned area in California increased five‐fold during 1972 to 2018, mainly due to summer forest fires.