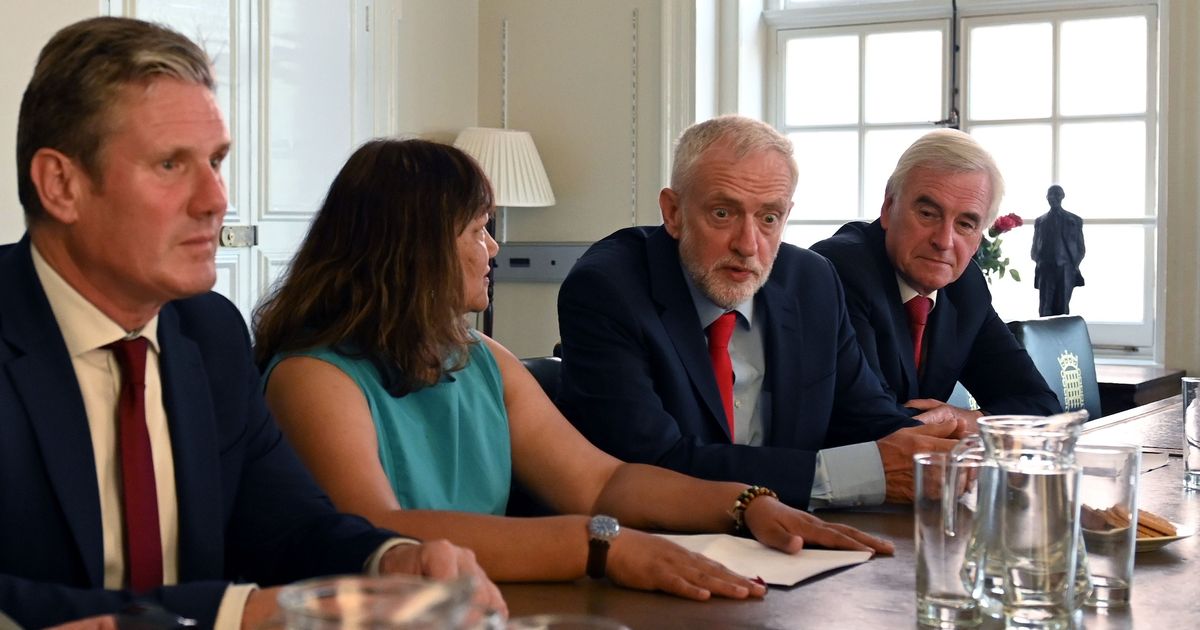 Westminster party leaders have reached agreement on their tactics to stop no-deal Brexit after crunch talks with Jeremy Corbyn.

The senior MPs are due to put forward legislation in the Commons next week in a bid to avoid Britain crashing out of the EU.

Meanwhile, MPs in the meeting indicated Labour’s original plan – to hold a no-confidence vote and install Corbyn as interim PM – has been put on the back burner for now.

Mr Corbyn met the Westminster leaders of the Lib Dems, SNP , Plaid Cymru and Change UK in his Commons office at 11am – exactly a week before MPs return from their summer break.

The summit came as Labour was forced to change tack and accept alternatives to its plan to install Jeremy Corbyn as a caretaker Prime Minister.

Labour’s plan would have seen the party call a no-confidence vote in the government, putting him in power where he would then call an election and a second EU referendum.

But Lib Dem leader Jo Swinson refused to back him as a caretaker PM – prompting Labour figures to brand her “petulant”.

Labour today accepted installing Mr Corbyn as caretaker – which would happen through a no-confidence vote in the government – was not the only option.

Shadow Brexit Secretary Sir Keir Starmer said another option would be to seize control of House of Commons business to block no-deal.

Sir Keir said he was “very supportive” of the alternative plan – and admitted “we’ve got to have a plan that we can all get behind”.

She said: “What we agreed upon is we will work upon a legislative approach and that we will be implementing that as soon as we can [next week].”

She added party leaders are “still discussing the actual methodology” of how the legislative route might work, suggesting more details will only be made public in due course. However, she said the focus was on stopping no-deal Brexit.

He told the Mirror on the way out: “This is a crisis. We have to stop no-deal and there a real willingness from all of us in that room to work together.”

He confirmed the MPs intend to “bring forward legislation to remove that cliff-edge of a no-deal Brexit at the end of October.”

He insisted the idea of having a caretaker PM was not “dead in the water” but told the BBC: “We need something with bite, we need something effective and we need to do it straight away when we come back.”

Sir Keir didn’t rule out accepting a different caretaker other than Mr Corbyn.

But there was confusion as he said: “Jeremy Corbyn’s very clearly said that any outcome now must be subject to a referendum and we would campaign for Remain.”

So far Mr Corbyn has stopped short of saying Labour would campaign for Remain, unless a no-deal Brexit was the only alternative.

Speaking before the meeting, Jeremy Corbyn insisted Labour will “do everything necessary” to halt a no-deal Brexit.

He said Labour wanted a general election and “a referendum, with a credible leave option as well as the option to remain.”

But he added: “We won’t rule out other options that could stop this no-deal disaster in its tracks. I’ll discuss all these options with the leaders of other opposition parties.

“I hope we can come to a good working arrangement and bring on board others across Parliament who see the danger of a no-deal crash-out.”

Boris Johnson is now ramping up efforts to find a deal – just as MPs gather to thwart him.

There is a mood within Downing Street that the UK must seize upon the optimism on the back of the G7 summit.

A spokesman for the PM said: “The PM has had good discussions with EU leaders both last week in France and in Germany and at the weekend and there is a clear understanding now that the commitment to leave on October 31st is absolute but that the PM wants to do so with a deal.”

Boris Johnson continued talks with EU leaders with a telephone conversation with the Dutch PM Mark Rutte, who has been one of the more sympathetic leaders to the UK’s position, this morning.

The PM will also speak to European Commission President Jean-Claude Juncker this afternoon.

But privately officials sounded a note of caution about an iminent breakthrough insisting that talks held today and this week were just the next step in the process.

His spokesman confirmed that the PM is willing to accept the remaining part of the Withdrawal Agreement and that only the backstop remains a problem setting Mr Johnson up for a row with Tory ultra leavers.

She said: “We have been clear that the changes we are seeking relate to the backstop.”

Meanwhile legal advice by Labour’s shadow attorney general has said High Court judges could block the PM from forcing through a no-deal Brexit.

The six-page advice says the courts could grant an “interim injunction” if the Prime Minister suspends Parliament to ram through no-deal on October 31.

Written by lawyer Shami Chakrabarti, the internal document – handed to the Guardian – adds suspending Parliament would be the “gravest abuse of power and attack on UK constitutional principle in living memory”.

It comes after it emerged Boris Johnson consulted his own attorney general about “proroguing” Parliament for weeks on end to prevent MPs blocking a no-deal Brexit.

Remain-backing MPs were set to meet at Westminster’s Church House this afternoon with a new “declaration” on blocking no-deal Brexit.

Shadow Chancellor John McDonnell was set to attend the event, which was expected to call for MPs to continue sitting in an alternative Commons if the Prime Minister suspends Parliament to ram through no-deal.