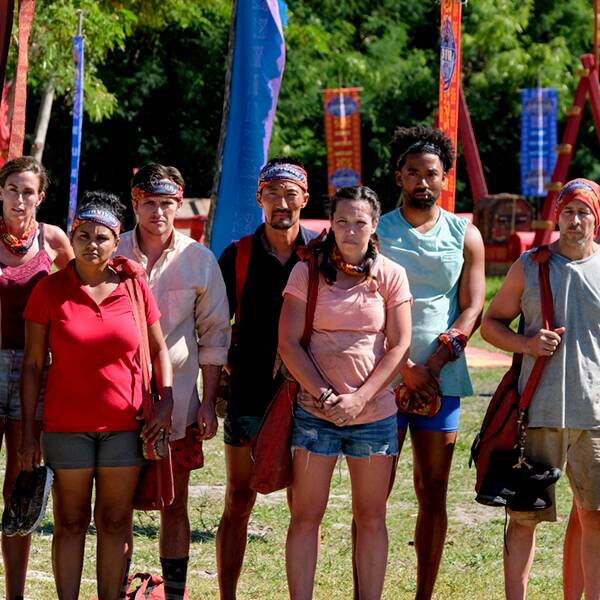 Survivor: Winners at War just gave us a Survivor first.

Three tribal councils in, everybody’s completely paranoid, and once again the losing tribe (this time, Sele) went into tribal without a totally clear concept of who was going home.

Denise (Sele) and Kim (Dakal), two players kind of at the back of the pack so far this season, found idols within the first few minutes. But they were idols in two pieces, and they had to give one half away by sundown. Denise suggested she give hers to Parvati, which is an interesting choice, and Kim chose to give hers to Sophie.

Denise ended up giving hers to Adam, and so both she and Adam were sitting there with idols in their bags when Rob suggested they all just empty their bags so they could all find out who has an idol. They both managed to hide them, but it sure was a new way to play the idol game.

Rob had gotten irritated by all the talk of new school players vs. old school players and everybody being paranoid, so he just decided to nip the paranoia in the bud. It didn’t really work since he learned nothing, but it was highly entertaining.

Adam actually ended up switching over to work with Rob and co, who decided to vote out Danni, and Danni was then voted out.

Over on the Edge of Extinction, Natalie and Amber wandered around trying to decipher a clue telling them there was something they had missed. They found nothing, until Natalie looked into the water container. A note informed her that she could sell a player an advantage that allowed them to leave tribal council before the votes had been cast, and so she offered to sell it to Jeremy, who was thrilled.

None of the idols or advantages got used tonight, but now we know there are a few in play, and things are likely to get really interesting next week.

Survivor: Winners at War airs Wednesdays at 8 p.m. on CBS.