The Borussia Dortmund Twitter account could not resist the opportunity to take a cheeky dig at Barcelona after the two sides were drawn in the same Champions League group this season.

Group F appears arguably the most competitive on paper, with Barca and Dortmund joined by Italian giants Inter Milan and Slavia Prague of Czech Republic.

Last season Barcelona were involved in one of the most extraordinary ties in the competition’s history when they were defeated 4-3 on aggregate by Liverpool in the semi-final having been leading 3-0 at the end of the first leg.

The winning goal was scored thanks to fast thinking by Reds’ full-back Trent Alexander-Arnold, who took a quick corner while Barcelona appeared to be switched off to set up Divock Origi for the decisive strike.

The Dortmund account reminded them of this incident with a simple post which read: “Time to practice our corners.”

The Tweet has been liked over 200,000 times and Liverpool fans in particular reacted with hilarity to the short message. One said: “This tweet is very very very good,” while another added “Give this admin a pay rise.”

Others were not so impressed, however, with one posting: “Stick to bottling the league against Bayern every year,” with Dortmund having not won the Bundesliga title since 2012, regularly finishing as runners-up to Bayern Munich.

Both sides will be hoping to improve on their performances in the competition last year this time around. Dortmund were knocked out 4-0 on aggregate by Tottenham in the last-16, while Barca are known to be prioritising winning the tournament having not tasted glory in Europe’s elite prize since 2015.

The two clubs have somewhat surprisingly only faced each other twice in competitive fixtures, which was all the way back in the 1997 UEFA Super Cup. Barcelona won the tie 3-1 on aggregate after a 2-0 win at the Nou Camp was followed by a 1-1 draw at Dortmund’s Westfalenstadion.

Warrington's Anthony Gelling arrested on suspicion of wounding with intent

Renault launch their season with no car but plenty of resolve 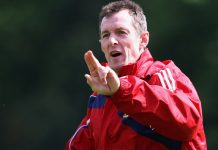 Liverpool move closer to £60m Anfield Road expansion that would take capacity to 61,000