NewsGroove Uk
NewsGroove Uk > Politics > Boris Johnson’s roadmap to recovery: When will schools be reopening? Everything you need to know
Politics 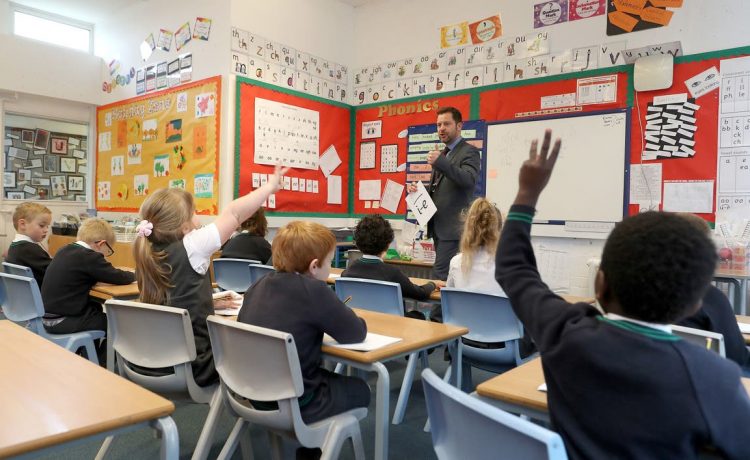 Here we explain more about the reopening of schools:

When will schools open in England?

As part of his road map out of lockdown, the Prime Minister told MPs that all schools should reopen from March 8.

The Government has always said that reopening schools would be the priority when lockdown is eased, with March 8 previously set as the target date.

According to a statement from the National Education Union, a full return would mean 10 million pupils and staff travelling to and from school each day.

The union has called for an “opening phased over a period of time”, similar to the approach being taken in Scotland, Wales and Northern Ireland.

What about outdoor school clubs in England?

Will students have to wear face coverings?

The Government has recommended face coverings for older students in classrooms, a marked change from previous guidance.

The roadmap states: “The Government also recommends that the use of face coverings in Higher Education, Further Education and secondary schools is extended for a limited period to all indoor environments – including classrooms – unless 2m social distancing can be maintained.”

Last year, masks and face coverings were only needed in cramped corridors and areas where “bubbles” mix.

The change will prompt questions about whether it was really safe to teach in crowded classrooms without masks being worn by older children.

The Government’s chief scientific adviser said the mask-wearing measure for pupils in secondary schools will be reviewed every five weeks.

Sir Patrick Vallance said the five-week interval will show the effects of the measure.

At the Downing Street briefing, he said: “In schools, ventilation is going to be important as children go back, masks will add to the protection, and hand washing.”

What about school pupil testing?

Secondary schools will have to run “asymptomatic testing sites” for all pupils to be tested for coronavirus three times each when they reopen.

Primary pupils will not have to be tested but this is being kept under review.

Secondary school pupils will swab themselves and hand the sample to a test processor, who could be a volunteer or a member of school support staff, and receive a result in 30 minutes.

It is thought that 11 tests can be carried out at each desk in a testing centre every hour. So with ten desks in a hall, 660 children can be tested each day.

It will be up to schools which students are tested first, with some expected to want to give priority to vulnerable pupils or exam cohorts.

The whole system of home testing will be based on trust and officials hope parents will be “supportive”, even though children who test positive will have to stay at home.

When did schools close in England?

At the time, it was announced that they would be closed until at least February half term. Nurseries and special schools were allowed to stay open.

Announcing the move, Mr Johnson said: “Because we now have to do everything we possibly can to stop the spread of the disease, primary schools, secondary schools and colleges across England must move to remote provision from tomorrow, except for vulnerable children and the children of key workers.”

“Everyone will still be able to access early years settings such as nurseries.”

What is happening with school exams?

During the third lockdown announcement, Mr Johnson said all schools in England would have learning moved online, a move which he said means “it’s not possible or fair for all exams to go ahead this summer, as normal”.

Since then, a number of exams including primary school SATS , phonics and timetable testing have been cancelled for students across the country and abroad.

In England, A-levels, AS levels and GCSE exams have been cancelled and teachers’ estimated grades will be used instead.

Scotland’s government cancelled all Higher and Advanced Higher exams for 2021, with final grades to be based on teacher assessment. The National 5 exams have also been cancelled.

In Wales GCSEs, AS and A-levels have been cancelled too – grades were going to be based on classroom assessments instead but will now be determined by teachers, based on evidence such as mock exams and coursework.

Although GCSE, AS and A-level examinations have been cancelled in Northern Ireland alternative arrangements have not been announced as of yet.

What other restrictions will be lifted that could benefit children?

The “rule of six” will return, along with new measures allowing two households totalling more than six people to meet – giving greater flexibility for families and friends.

What is happening with schools in Scotland?

In Scotland, children between the ages of four and eight in primaries one to three were due to return on Monday.

All children under school age in early learning and childcare are also returning.

Prime Minister to unveil road map out of lockdown

The phased reopening means there will also be a very limited part-time return for senior secondary pupils to allow them to complete work for national qualifications.

Have children in Wales gone back to school?

In Wales, pupils aged three to seven also returned on Monday, along with some older pupils on vocational courses.

Schools and colleges are already open for children of key workers, vulnerable learners and those completing essential exams or assessments. Special schools are open where possible.

When will schools in Northern Ireland open?

Schools will open to primary school pupils in years 1-3 on 8 March.

Children in pre-school settings are also likely to return on 8 March, while pupils in years 12-14 in post-primary schools will return to class on 22 March.