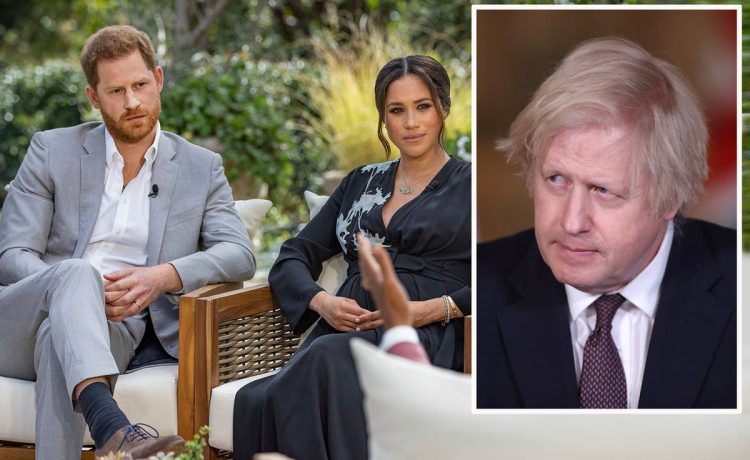 oris Johnson was still facing questions today over the bombshell Harry and Meghan interview that has plunged the Royal Family into crisis over accusations of racism.

His spokesman confirmed that the Prime Minister had watched the couple’s explosive interview with Oprah Winfrey as it aired in the UK last night.

But he declined to reveal what Mr Johnson thought about the broadcast.

“You have the PM’s words from the press conference last night and I won’t be adding any further to what he said,” the spokesman said.

At a Downing Street press briefing on Monday, Mr Johnson had spoken of his enormous respect for the Queen, adding: “As for all the other matters to do with the royal family, I’ve spent a long time now not commenting on royal family matters and I don’t intend to depart from that.”

Today, the Prime Minister’s spokesman was repeatedly pressed by journalists over his views on what was revealed in the interview.

The spokesman continued to direct journalists back to the comments the PM made during last night’s press conference – despite them being made before he had seen the interview.

The spokesman was asked whether the PM was still friends with Prince Harry’s uncle Earl Spencer – a friend from Eton – and whether or not he had spoken to him about the interview.

He was also asked if the PM agreed with his own minister Lord Goldsmith who accused Harry of “blowing up his family” or what he thought about President Joe Biden’s comment praising Meghan’s “courage”.

The spokesman declined to comment on the White House’s response to the interview, whether it may affect the UK’s reputation around the world, or whether the nation has a duty of care to the monarchy.