Boris Johnson urged to bin amnesty for illegal immigrants amid warnings it could cost taxpayers £2.5billion


BORIS Johnson was urged to bin his amnesty for illegal immigrants last night amid warnings it could cost taxpayers up to £2.5 billion.

Migration Watch said allowing as many as half a million “illegals” access to full benefits and public services would cost a fortune as it launched a new campaign to stop the move.

The influential think tank said the amnesty being looked at by the new PM will only encourage more migrants to try and make it to the UK – or overstay their visa.

And it has launched an online petition urging voters to sign up and convince the PM to think again and “rule out” such a move.

It marks the first big test for new Home Secretary Priti Patel – who yesterday insisted that Brexit would finally allow Britain to regain control of its borders.

Migration Watch chair Alp Mehmet stormed: “Boris Johnson first called for an amnesty for illegal immigrants when he was campaigning to be Mayor of London. With respect to our new Prime Minister, he was wrong then and is wrong now.”

Boris Johnson last week reiterated comments during the Tory leadership campaign and said he would “look at” an amnesty for those migrants who have been in the UK illegally for over 15 years.

Experts believe there are as many as a million illegal immigrants in Britain – with the number increasing by as many as 70,000 a year.

Migration Watch said amnesties had been tried and failed in Italy, Spain and France in the past 20 years – with numbers trying to enter the country going up each time.

“Stepping up enforcement is the only way forward,” the think tank said.

Bill for consultants on HS2 triples to £1.2billion

THE bill for consultants on the HS2 project has tripled to £1.2billion.

New accounts show the high-speed rail link spent a fortune on contractors in 2018-19.

James Roberts of the TaxPayers’ Alliance said: “The HS2 gravy train is dishing out mega money to professional consultants and top bosses, all at taxpayers’ expense.” 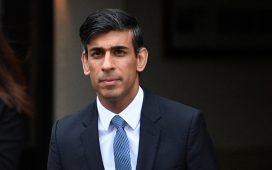