Boris Johnson: UK 'will be ready' for no-deal Brexit 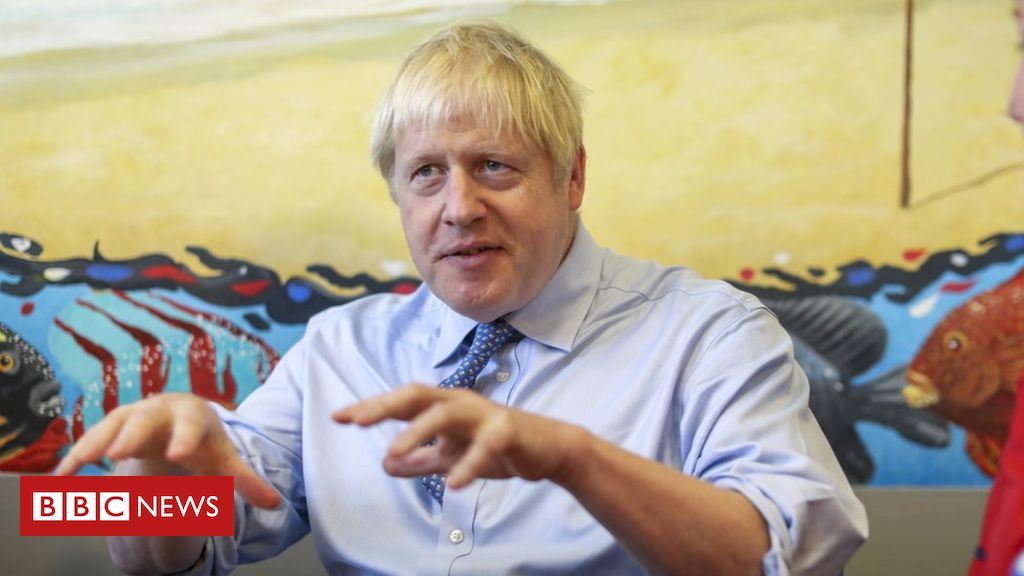 Boris Johnson has insisted no-deal Brexit preparations are on track, despite a leaked report warning of food and medicine shortages in a no-deal exit.

The prime minister said preparations had been “very far advanced” ahead of the original 29 March deadline.

He added that plans had since “slipped back”, but the UK would be ready to leave with no deal if required.

Jeremy Corbyn has vowed to do “everything necessary” to stop no deal.

In a speech earlier, the Labour leader said the leaked report made it “crystal clear how bad things will get” if the UK leaves without a deal on 31 October.

He added that the leak showed “chaos and dislocation” after a no-deal was “very real and threatening”.

Meanwhile, local council planning documents seen by the BBC warned that school meal nutrition standards may need to be amended or discarded after a no deal.

Some councils are anticipating they will not meet the standards because of an anticipated rise in food prices and restriction of choice.

According to Operation Yellowhammer, the dossier leaked to the Sunday Times, the UK could face months of disruption at its ports after a no-deal Brexit.

And plans to avoid a hard border between Northern Ireland and the Irish Republic are unlikely to prove sustainable, it adds.

Michael Gove, the cabinet minister responsible for no-deal planning, has said the study was old and Brexit planning had accelerated since Mr Johnson became prime minister.

The BBC has been told the study was first seen by devolved governments earlier this month.

Speaking on Monday, Mr Johnson said he was “confident” the EU would agree to a new Brexit deal, but the UK would be ready to leave without one if needed.

“I’m not pretending that there won’t be bumps on the road […] but if everybody puts their minds to it, I have absolutely no doubt that we can get ready,” he added.

The prime minister has said he wants to leave the EU with a deal, but the UK must leave “do or die” by the end of October.

He wants the EU to ditch the Irish border backstop plan from the deal negotiated by Mrs May, which was rejected three times by Parliament.

But the EU has continued to insist the policy – intended to guarantee there will not be a hard Irish border after Brexit – must remain and cannot be changed.

His comments came after Downing Street rejected calls from Mr Corbyn and 100 MPs for Parliament to be recalled from its summer recess to discuss Brexit.

A No 10 spokeswoman said a large majority of MPs had previously voted to approve the motion specifying that Parliament would return on 3 September.

Mr Gove is expected to update MPs on no-deal preparations when the Commons returns.

Speaking earlier, Mr Corbyn said a general election was required to offer the “change of direction the country needs”.

He has sought the support of opposition MPs for a plan under which he would be installed as caretaker PM if the government is defeated in a no-confidence motion when the Commons returns from recess in two weeks’ time.

Under his proposal, Mr Corbyn would form an emergency government, delay Brexit, call a snap election and campaign for another referendum.

The SNP and Plaid Cymru have not ruled out their support for the plan but the Liberal Democrats and some potential Tory allies have said they would not support putting Mr Corbyn in Downing Street.

Mr Johnson is travelling to France and Germany to meet EU leaders later this week.

The prime minister will insist there must be a new Brexit deal when he holds talks with German Chancellor Angela Merkel and French President Emmanuel Macron.

What did the leaked no-deal document say?

The leaked dossier said leaving the EU without a deal could lead to:

The fall-out from the Operation Yellowhammer leak presents an interesting conundrum for the government.

On the one hand it seems keen to distance itself from any suggestion that the worst-case scenarios presented are likely.

On the other it needs to be seen to be open about the possible impact of a no-deal Brexit, given the prime minister’s insistence that the UK will leave the EU on 31 October come what may.

And while Mr Gove described the leaked dossier as an “old document”, a government source confirmed it was presented at a ministerial planning meeting just three weeks ago.

What matters is whether the possible food shortages, disorder and travel disruption the leaked documents reveal are still considered possible worst-case scenarios.

And then, how far the “significant steps” taken by the government have mitigated the risk of each of those outcomes.

That may become clear in the coming weeks when the government begins a public information campaign telling people how to prepare for life outside the EU.

READ  Elizabeth Warren: who is the wannabe Democrat president?
Share on FacebookShare on TwitterShare on PinterestShare on Reddit
newsgrooveAugust 19, 2019