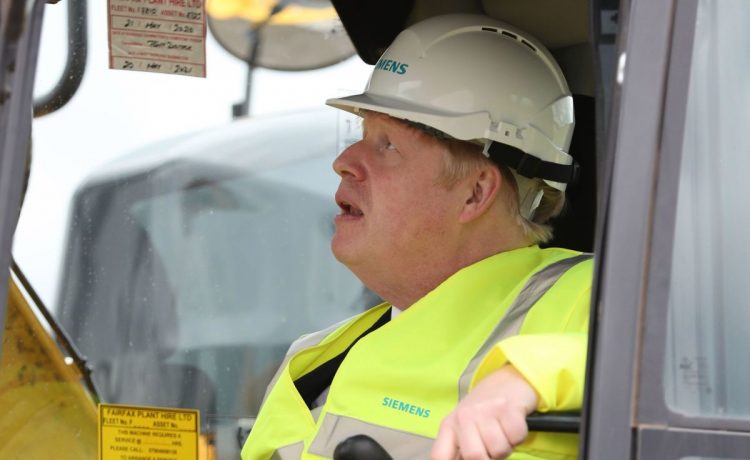 BORIS Johnson has refused to apologise for blaming care homes for coronavirus deaths after furious backlash.

Care-home bosses accused the “cowardly” PM of “rewriting history” after he said yesterday facilities had ignored procedures to stop the spread of coronavirus.

Speaking on a visit to Goole in Yorkshire yesterday, the PM insisted the Government was “learning lessons the whole time”.

Pointing the finger of blame at individual care homes, he said: “We discovered too many care homes didn’t really follow the procedures in the way that they could have.”

After anger and outrage from care home staff, No 10 refused to apologise.

The PM’s spokesman said this lunchtime: “Throughout the pandemic care homes have done a brilliant job under very difficult circumstances.

“The Prime Minister was pointing out that nobody new what the correct procedures were because the extent of asymptomatic transmission was not known at the time.”

When asked if Mr Johnson regretted his choice in words, Downing Street repeated the same line saying the PM was only speaking about asymptomatic transmission.

He said: “To be honest with you, if this is genuinely his view, I think we’re almost entering a Kafkaesque alternative reality, where the Government sets the rules, we follow them, they don’t like the results, they then deny setting the rules and blame the people that were trying to do their best.

“You’ve got 1.6 million social care workers who when most of us are locked away in our bunkers waiting out covid and really trying to protect our family, we’ve got these brave people on minimum wage, often with no sickness cover at all, going into work to protect our parents, our grandparents, our children, putting their own health and potentially lives at risk.

“To get perhaps the most senior man in the country turning around and blaming them on what has been an absolute travesty of leadership from the Government I just think it’s appalling.”

Mr Adams demanded the PM take responsibility, and accused him of rewriting history.

He said: “What we are getting is history rewritten in front of us when you could list pages and pages of government failure which the system has had to cope with.

“To get a throwaway comment almost glibly blaming the social care system and not holding your hands up for starting too late, doing the wrong things, making mistake after mistake is frankly unacceptable.”

I think we’re almost entering a Kafkaesque alternative reality, where the Government sets the rules, we follow them, they don’t like the results, they then deny setting the rules and blame the people that were trying to do their best”

He also pointed to the shortage of personal protective equipment (PPE) for staff in many homes, which failed to combat the spread of the virus.

The National Care Forum (NCF), which represents 120 of the UK’s social care charities, hit back by telling the PM to start “turning the dial up on reform and down on blame”.

“Government guidance has come to the sector in stops and starts – with organisations grappling with over 100 pieces of additional guidance in the same number of days, much of which was not accompanied by an understanding of the operational implications of operating care services.

“Care providers have moved to adopt these new procedures consistently, at pace and with integrity.”

The Independent Care Group (ICG) said the vast majority of providers had “done their absolute best in the face of slow and conflicting advice”.

ICG chairman Mike Padgham said: “We should not be getting into the blame game and it is wrong to criticise care and nursing homes at this time.

“It is worth remembering that in February the Government agency Public Health England told homes it was ‘very unlikely that people receiving care in a care home will become infected’ and that homes didn’t need to do anything differently.

“It was many weeks later, after most homes had already put themselves into lockdown, that the advice changed.”

No10 today refused to apologise for Boris’ words.

A spokesman said: “Throughout the pandemic care homes have done a brilliant job under very difficult circumstances.

The PM was pointing out that nobody knew what the correct procedures were because the extent of asymptomatic transmission was not known at the time.”

He told BBC Breakfast: “What the PM was pointing out was nobody knew what the correct proceedings were because the extent of the asymptomatic cases was not known at the time.

“Nobody is suggesting that care homes have not done a fantastic job.”

Care homes have had to contend with difficult rules while trying to look after vulnerable people – including confining patients to their room if they show signs of the virus.

It took the Government weeks to roll out wide-scale testing in care homes and for care staff – who could pass it on to residents.

According to the ONS, one in five people in care homes in England became infected with coronavirus – and more than half of all homes had outbreaks.

Care-home residents over 65 and those with dementia are now able to receive a coronavirus test every 28 days and staff are able to access them every week, the Department of Health announced last week.

Homeowners to get £5,000 vouchers to insulate homes under green scheme

Chancellor to give firms £1,000 bonus for every trainee they take on

Boris Johnson says too many care homes, ‘didn’t really follow the procedures in the way that they could have’