Treasury minister Jesse Norman faced awkward questions on Thursday morning over the exchange, initially telling Sky News: “I have no idea what the Prime Minister thinks about these matters.”

Pressed on the matter, Mr Norman said the PM gave him the “impression” he thought Mr Hancock was doing a very good job.

However, his defence grew more robust throughout the morning and he later dismissed the row as “nonsense”.

Mr Norman insisted the Prime Minister was “firmly behind” the Health Secretary and told BBC Radio 4’s Today programme: “I think this is some of the biggest nonsense I’ve heard.

“The Prime Minister obviously, as anybody would detect, is a massive supporter of the Health Secretary, he’s coming firmly behind him. There can be no question of loss of confidence.”

Mr Norman said the messages were sent “in the middle of the biggest economic and public health catastrophe for a century” and described them as a “tiny snapshot” only showing one side of the story.

Mr Cummings published the series of screenshots in a bid to combat what he claims are “lies” from No 10.

In one exchange, on March 26 last year, Mr Cummings complains about the UK’s testing programme, led by Matt Hancock, and compared it to how well the USA was doing.

In another exchange the following morning the Prime Minister allegedly refers to Mr Hancock as “hopeless” in a conversation about ventilators.

In a separate excerpt from April 27, the PM appeared to call the situation around personal protective equipment “a disaster” and alluded to diverting some responsibilities to Mr Gove.

Downing Street did not dispute the authenticity of the messages but has insisted the PM has full confidence in Mr Hancock. 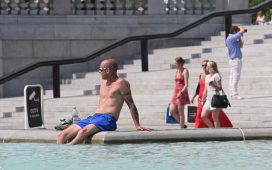