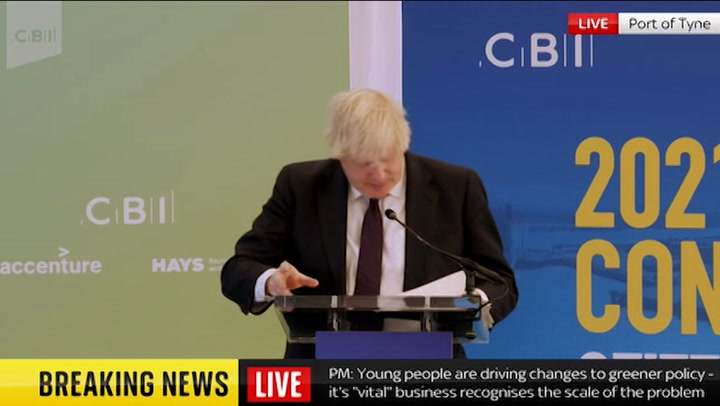 Boris Johnson mixes up his notes in CBI keynote speech

Boris Johnson today lost his place for 20 seconds before then rambling about Peppa Pig in a bizarre speech to business leaders.

The Prime Minister had hoped to steady wobbles to his leadership over high-speed rail,care and sleaze with a speech to the CBI conference.

Trumping the speech ahead of time, No10 announced new homes in England will have to include electric vehicle charging points, adding “up to” 140,000 new points per year.

But it went off the rails after he lost his place and spent just over 20 seconds rifling through his notes, muttering “forgive me” three times and “blast it”. Business leaders in the tent appeared unsure how to react.

He then went into a lengthy diversion about Peppa Pig World – which is almost 6 hours’ drive from South Shields – after visiting it yesterday.

He demanded to know why business leaders in South Shields had not visited the children’s attraction 330 miles away in Hampshire.

He lost his place and spent 20 seconds rifling through his notes, muttering: “Forgive me”
(

The Prime Minister also jokingly quoted Lenin, referred to himself as Moses, talked about how he used to scorn wind farms and electric cars, and impersonated an accelerating car saying: “Broom broom brah brah!”

The Labour Party tweeted: “The joke’s not funny any more”.

Meanwhile, North East businessman Richard Swart, who is global sales and quality director at County Durham manufacturer Berger Group and chairman of the Advanced Manufacturing Forum, told the Mirror the speech was “catastrophic”.

He said: “This was way below par for a Prime Minister, especially given the multitude of challenges this country is facing.

“We are desperate for statesmanlike behaviour to help us navigate through Covid, Brexit, labour shortages and other challenges we face.

“It is time for the Tory Party to put ideological loyalties to one side, focus on what’s good for the country and choose more responsible leadership

Mr Johnson’s surprise reference to Peppa Pig came shortly after he regained his place in his speech.

He said: “Yesterday I went, as we all must, to Peppa Pig World.

Peppa Pig World is almost six hours’ drive from the venue he was speaking at in South Shields.

He added: “I loved it and Peppa Pig World is very much my kind of place. It has very safe streets, err… discipline in schools, heavy emphasis on new mass transit systems, even if they’re a bit stereotypical about Daddy Pig.”

Praising the character as an example of British innovation, he continued: “Who would have believed that a pig that looks like a hairdryer or possibly a Picasso-like hairdryer, a pig that was rejected by the BBC, would now be exported to 180 countries with theme parks both in America and China?”

Mr Johnson made eyebrow-raising claims about high-speed rail and business.

He boasted: “Last week we announced three vast new high speed lines, cutting the time from London to Manchester by an hour and creating a new Crossrail of the North.”

He also said “I’ve never been anything other than business’s number one fan,” despite privately saying “f*** business” in a 2018 row over Brexit.

He said: “There are also sound evolutionary reasons why Mother Nature does not like working from home, so I prophesise people will come back.

The PM recalled trying out a Tesla car, while writing about motoring for GQ magazine, that “expired in the fast lane of the M40”.

He also claimed during his childhood, none of the UK’s grid was powered by wind – saying: “It seemed faddish and ludicrous to imagine we could light and heat our homes with a technology that dated from 9th Century Persia.”

But he claimed technology had improved and “the pace of change is now going to accelerate like a new Tesla”, adding: “The tipping point has come, hasn’t it?

“EVs may not burble like sucking doves and they not have that broom broom brah brah that you like, but they have so much torque that they move off the lights faster than a Ferrari.”