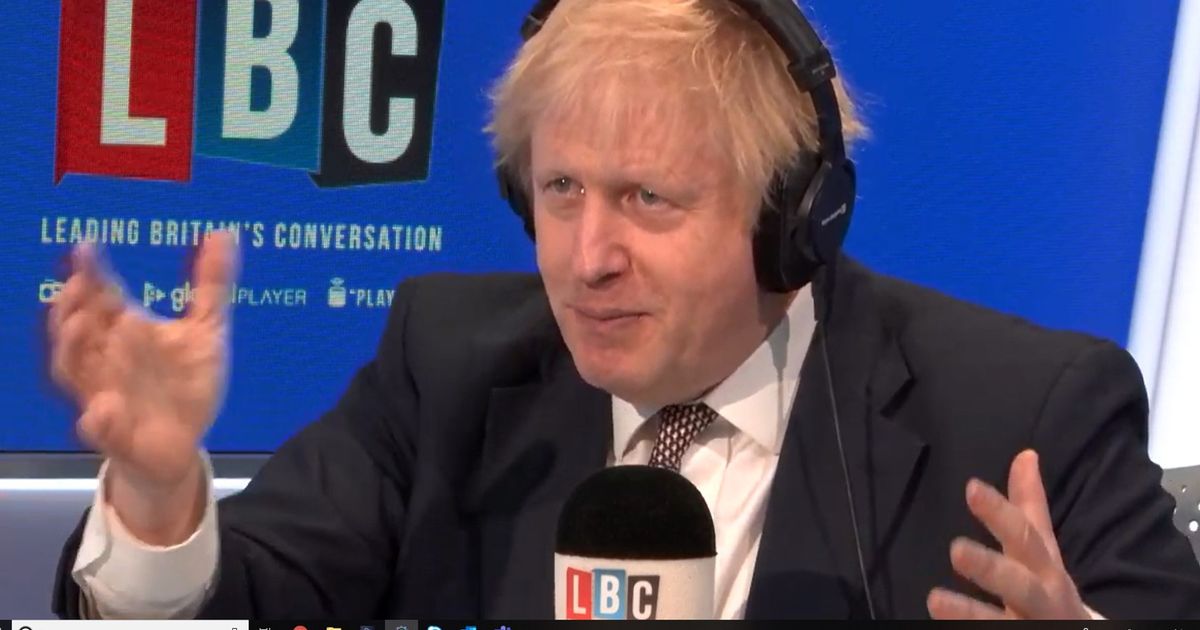 Chicken Boris Johnson has been skewered by the British public in a brutal hour-long radio phone-in.

The Tory leader was slammed for his comments about single mums and told he had nothing to offer a nurse to get out of the bed in the morning.

In the LBC grilling, he was challenged over his lies, struggled to say how many trade deals he’ll get, and refused to say if gaffe-strewn Jacob Rees-Mogg can keep his job.

In a particularly humiliating moment, he said he thought a Greggs sausage roll costs £1.90 – double the price – despite boasting he’s made of the pastries.

And he once again refused to confirm how many children he has.

The Tory leader may have ducked grillings from Channel 4 News and the BBC’s Andrew Neil, but you can’t say he got an easy ride in today’s phone-in.

Here are the 11 most cringeworthy moments you need to know about.

1. He was savaged by a furious single mum

Boris Johnson was mauled live on air by a single mum over his comments about “ignorant” and “illegitimate” children.

The woman, named only as Ruth, challenged the Prime Minister over his column in The Spectator magazine in 1995, which said single mums were producing a generation of “ill-raised, ignorant, aggressive and illegitimate children”.

Ruth asked the PM: “I’m a single mother, I don’t appreciate what you’ve said about single mothers and, by implication, my family.

“Why are you happy to criticise people like me when you refuse to discuss your family?”

Mr Johnson has always refused to confirm how many children he has and rarely discusses his family.

Yet rattled Mr Johnson said: “I mean no disrespect to you or anybody. These are 25-year-old quotations culled from articles from before I was even in politics.

“It’s yet another attempt by the Labour Party to distract from the fundamental issues at heart of this eleciton.

“It’s almost invariable, when you look at these articles, the piece is saying the exact opposite of whats being claimed. I’ve written millions and millions of words in the last 30 years.”

2. And a nurse told him he’d given her nothing to get out of bed for

Boris Johnson was slapped down by an NHS nurse live on air after blustering about how he’d help her.

Speaking to Janet from Sunderland, a nurse and Waspi woman, the PM refused to commit to compensating her generation of women for the pension they lost when retirement aged was moved from 60 to 66.

Mr Johnson said it was “not clear where the money was coming from” on Labour’s £58 billion commitment to Waspi women.

Janet snapped: “It’s done nothing to convince me to get up and go to work on Monday, not at all.”

3. He paused for a bizarrely long time over the Russia report – and his reason was even more bizarre

Caller Noel asked about claims a secret report on Russian interference in politics – which Boris Johnson has refused to release – named Tory donors.

Mr Johnson said: “What I can tell Noel is that I know absolutely no evidence that Russia or indeed any other power has successfully or otherwise interfered in…”

But then he left a huge, conspicuous pause before adding: “The politics of this country.”

Suspicious host Nick Ferrari said: “Why did you take so long to get to that word?”

“The reason I was momentarily distracted was because I was looking at the TV screen where it has a picture of me drawing a hand across my throat.

“But that is only because I was imitating you.”

The throat-slit moment – caught on camera – came earlier in the debate when Mr Johnson was talking about a plan for social care. The gesture is often used to signal interviewers or interviewees should wrap up and move on.

4. He refused to say how many kids he’s got – or whether he’ll have another one in No10

The squirming PM once again refused to answer how many children he has.

He said: “I love my children very much but they are not standing at this election.”

And he wouldn’t be drawn on whether he could have yet more kids in 10 Downing Street with his girlfriend Carrie Symonds.

But he has had multiple affairs, including the one with Petronella Wyatt (above) which led to a pregnancy that was terminated.

And a 2013 court ruling said the public were entitled to know about claims that one affair – with art consultant Helen Macintyre – resulted in a daughter who was his.

5. The rattled PM refused to say if Jacob Rees-Mogg can keep his job

The rattled Tory leader snapped at an “irrelevant” curveball question about where Jacob Rees-Mogg was – and whether he would keep his Cabinet job.

He was asked repeatedly what would happen to the Leader of the Commons after a string of gaffes and outrage scandals, including his comments about the Grenfell Tower fire.

Mr Rees-Mogg has been banished from public view after suggesting it would have been “common sense” to ignore official advice and flee the fire.

Mr Johnson refused to say what conversations he had with Mr Rees-Mogg or whether he’d be sacked.

But caller Antonio from Kensington demanded to know if Mr Rees-Mogg would have a position.

“Will he be part of your Cabinet?” he demanded.

6. His hypocrisy over Brexit ‘death in a ditch’ was exposed by a very simple question

One caller from Abbey Wood, south London, had a beautifully simple question.

He asked: “If you had one option only, would you rather be Prime Minister or leave the EU?”.

Mr Johnson replied: “Well I think I would rather have got us out of the EU, I can tell you that.”

But with expert timing, host Nick Ferrari cut in: “But you promised to die in a ditch?!”

And he’s right. Mr Johnson has made this claim before, only to then stay as Tory leader when we didn’t come out of the EU as he promised on October 31.

“Why should anyone believe your promises,” Nick Ferrari said. “You shouldn’t even be sitting here.”

But Mr Johnson blamed Labour, the Lib Dems and SNP for “forcing me to break that promise.”

7. He struggled to say how many trade deals he’ll get

The Prime Minister has boasted that he will “get Brexit done” and have deals for 80% of trade in three years.

But he squirmed when asked to put a clear figure on how many trade deals are ready to go.

Deals cannot, of course, be signed and sealed until Brexit has actually happened and the PM knows this.

“I’ll have to come back and give you the number,” he said. Under repeated questioning he eventually said: “I imagine we have about a dozen that we are current working on”.

He even refused to name countries, saying “I’m not going to get into a prioritisation now,” before conceding and naming India, China, Australia and New Zealand.

He also pledged he would “walk out” of trade talks with the US if President Donald Trump wanted the NHS to be on the table.

8. He confirmed Brexit won’t be done by New Year’s Day

Boris Johnson raised eyebrows by saying Brexit would happen by January 31 “at the latest”.

But he then clarified it’s not going to happen on New Year’s Eve. “I’m not going to make that pledge,” he said.

And he added New Year’s Eve parties will “go ahead”.

9. He was repeatedly challenged over his lies

The Tory leader used the interview to trot out a series of lies and half-truths despite them being debunked several times before.

He said there would be 40 new hospitals, despite many of them being rebuilds.

He said there’d be 20,000 more police officers, without mentioning they won’t quite replace the 21,000 lost under the Tories.

He said NHS spending was getting the biggest boost in living memory, despite it rising faster under Labour .

And he said Sadiq Khan plunged another £17m into the Garden Bridge, when some of this was prior commitments and the new mayor pulled the plug within a year of reaching office.

Host Nick Ferrari challenged him in real time on several of the claims. He told Mr Johnson: “You misrepresent the figures. Why do you continually do this Mr Johnson?”

10. He came up with no new answer for the victims of Hillsborough

Hillsborough victims and families were dismayed after David Duckenfield was found not guilty at a trial over the football match disaster that left 96 dead.

It means no one has faced criminal sanction over the 1989 disaster.

However, Mr Johnson did not offer any new respite to the families. He said: “I have the utmost sympathy obviously for the victims and their families and they’ve waited too long for justice after what happened at Hillsborough, there’s no question about that.”

When asked if there should be a “further review”, the Prime Minister replied: “I think it’s probably not right for me to comment on the legal process.

“But I can certainly understand their frustrations and they certainly have my sympathies.”

Johnson was, of course, once made to apologise to the people of Liverpool after a Spectator editorial accused them of “wallowing” in victim status.

The millionaire Tory leader claimed the hot treat cost £1.90 – despite even the Westminster branch, in expensive central London, charging £1.30. Other parts of the country charge less.

Millionaire Mr Johnson, who once described his £250,000 columnist’s salary as “chicken feed”, boasted this week: “Have I ever not had a Greggs?! I am made of Greggs!”

But he blustered when asked how much a Greggs sausage roll actually cost.

Astonished host Nick Ferrari said: “You have no idea? You just told me you’re ‘made of Greggs’. You must eat their sausage rolls all the time.”