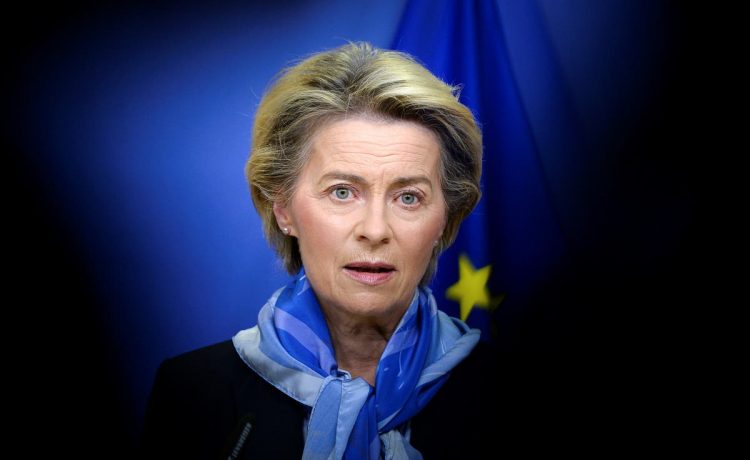 oris Johnson hit back today in a furious vaccines row with the EU, warning the bloc to “stand by its commitments” and not endanger the battle against Covid-19 by imposing jab export restrictions.

Downing Street issued a strong response within hours of EU chief Ursula von der Leyen threatening to cut off exports from the European bloc to Britain and other vaccine-producing countries if more supplies are not delivered to mainland Europe.

The Prime Minister’s official spokesman stressed that Ms von der Leyen had assured Mr Johnson earlier this year that a new mechanism to establish exports from the EU was aimed at increasing transparency and not intended to restrict exports by companies where they are fulfilling contractual responsibilities.

He added: “It remains the case we would expect the EU to continue to stand by its commitments.”

Pressed on whether Mr Johnson believed there was any justification for Brussels to use emergency powers to seize control of vaccination production and distribution, he said: “We expect the EU to stand by its commitments.

“We have said before that the global recovery from Covid relies on international collaboration.“We are all dependent on global supply chains and putting in place restrictions endangers global efforts to fight the virus.”

“We’re surprised we are having this conversation with the EU,” he added.

In an extraordinary intervention on Wednesday, Ms von der Leyen said that the European Commission was prepared to use whatever “tool” necessary to ensure what it regards as fair access to supplies.

With the EU under fire over its slow roll-out of vaccines, she stressed that 41 million doses had been exported in six weeks from the European bloc to 33 countries, which includes millions of Pfizer jabs from Belgium to the UK.

She also told how the EU expects to get tens of millions of doses less of the Oxford/AstraZeneca jab than she said it had ordered.

“This is why we need to ensure that there is reciprocity and proportionality.

“I want to be clear on reciprocity. If the situation does not change, we will have to reflect on how to make exports to vaccine-producing countries dependent on their level of openness.

“So we are exporting a lot to countries that are themselves producing vaccines and we think this is an invitation to be open so that we also see exports from those countries coming back to the European Union.

“The second point that is of importance for us – we will reflect on whether exports to countries who have higher vaccination rates than us are still proportionate.

“In other words, we want reliable deliveries of vaccines, we want to increase in the contracts, we want to see reciprocity and proportionality in exports and we are ready to use whatever tool we need to deliver on that.

“This is about making sure that Europe gets its fair share.”

Senior EU figures have accused Britain of imposing an effective ban on vaccine exports, a claim strongly denied by the Government which has organised a highly-successful vaccination programme in the UK.

In contrast, the Commission has been accused of being too slow in ordering supplies and to have failed to ensure sufficient investment in production facilities.

The vaccination roll-outs on the Continent have also been hit by the decision by a number of European countries, including Germany, France and Italy to temporarily stop using the AZ vaccine because of concerns that it may be linked to blood clots, even though evidence so far suggests they are less likely in people innoculated with it than those who have not had a coronavirus vaccine.

Business Secretary Kwasi Kwarteng slammed the move which risks undermining confidence in the vaccine. Asked about the AZ decision, he told LBC Radio: “You would have to ask those politicians in Europe about what they are doing and what they are saying.

“What they are saying is very, very unhelpful. The WHO (World Health Organisation), the EMA, the European’s own organisation, have said that the AstraZeneca jab, nothing wrong with it at all.

“I would recommend people to take it.

“And as I understand it, the Prime Minister of France himself, Jean Castex, has said that he is going to take the AstraZeneca jab so there is a lot of mixed signals in Europe.”

Several EU nations are waiting for reassurance from the bloc’s medicines regulator, due tomorrow, before restarting use of the AZ jab.

Ms von der Leyen spoke out as six EU countries complained to Brussels about reduced deliveries that are hampering the bloc’s already troubled inoculation campaign and could stall plans to restart travel this summer and support the battered tourism sector.

The EU faces an acute shortage of Covid-19 jabs due to reduced deliveries by AstraZeneca and has been in dispute with the pharmaceutical giant about contracted supplies for months.

“We are in the crisis of the century,” Ms von der Leyen said as Covid-related deaths in the EU top 550,000 and less than a tenth of the bloc’s population has been inoculated.

She outlined plans for more vaccines to come on stream in coming months.

However, the sluggish inoculation campaign threatens plans announced by the Commission to launch “green digital certificate” that would collate information on vaccinations, tests and Covid recovery to let travellers cross borders freely again in the European bloc.

Southern EU countries reliant on tourism and other proponents of the new Covid-19 certificate hope it would win final approvals in June and go online just in time for the peak season. But countries including France, Belgium and Germany have voiced scepticism.