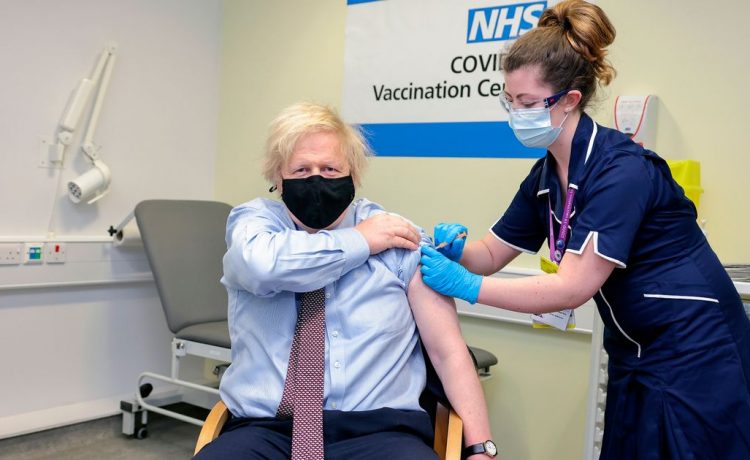 Boris Johnson has had his first dose of the Oxford/AstraZeneca vaccine at the same hospital where he fought for his life last year.

The Prime Minister, 56, received the jab at St Thomas’ Hospital in London – where he was given oxygen through a tube in intensive care last April after contracting Covid-19.

This evening he urged everyone to take the vaccine when it is offered to them.

He said as he left: “I literally did not feel a thing. It was very good, very quick.

The EMA has, however, been unable to say definitively that the jab is not linked to “extremely rare” blood clots on the brain, of which there have been 18 reports among millions of people vaccinated.

It came countries including France, Germany and Italy re-started their vaccine programmes with the AstraZeneca jab – reversing an earlier decision to suspend it over blood clot concerns.

It comes as new figures from the Office for National Statistics (ONS) show that around one in 340 people in private households in England had Covid-19 in the week to March 13, down from around one in 270 the week before.

Other data shows the UK ended 2020 with one of the highest levels of excess mortality for people aged under 65 among countries in Europe.

The World Health Organisation and the UK’s Medicines and Healthcare products Regulatory Agency (MHRA) have said that the jab is safe and have encouraged people to take up their vaccine appointments.

Mr Johnson, 56, told a Downing Street press conference on Thursday: “The Oxford jab is safe and the Pfizer jab is safe.

“The thing that isn’t safe is catching Covid, which is why it is so important that we all get our jabs as soon as our turn comes.”

Earlier, a senior scientific adviser said the UK must keep the South African Covid-19 variant at bay as some European countries report a third wave of infections.

Professor Neil Ferguson, from Imperial College London, who spurred the UK’s decision to go into lockdown last March, warned that a group of European countries are seeing increasing levels of coronavirus cases.

“Perhaps more concern for the UK though is that some countries are notably seeing a significant fraction, 5-10% of cases, of the South African variant,” he told BBC Radio 4’s Today programme.

“That is the variant we really do want to keep out of the UK.”

A study published on Thursday by Oxford University suggested that the Pfizer and AstraZeneca jabs could struggle against the South African variant and may end up offering limited protection.

Researchers said the South African variant should be the focus of any efforts to create new vaccines that may be needed next winter.

Professor Ferguson said “we do need to keep these variants of concern at bay”, adding: “The longer we can keep it (South African variant) out, or at least at low levels in the UK, the more time we have to vaccinate the entire adult population and to update vaccines to be able to cope with that new variant.

He said there are “important decisions coming up” with regards to dealing with variants, including how much the ban on international travel is relaxed.

One way of dealing with variants may be through “introducing testing of people coming into the country”, he suggested, but added: “These are policy decisions.”

Prof Ferguson said deaths in the UK were being driven down “at a faster rate then I ever thought possible, and that will allow us to open up, but opening up poses risks, particularly if there are variants around which can partially escape the vaccine”.