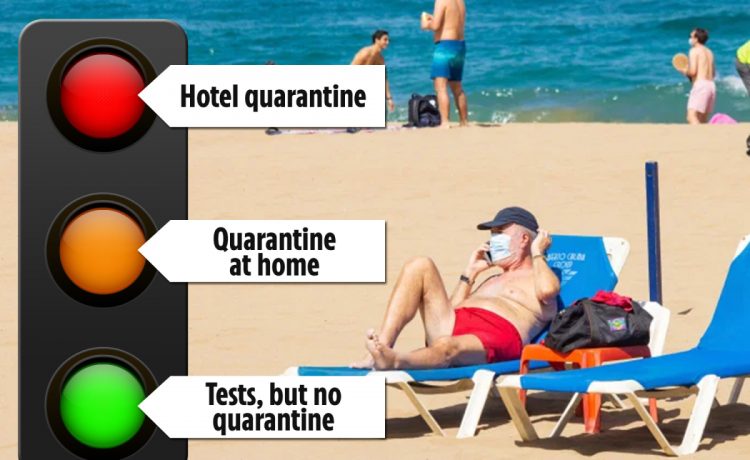 BORIS Johnson has refused to say if foreign holidays will restart on May 17 as the traffic light system was confirmed today.

Different countries are set to be graded green, amber or red according to their vaccinations, infection rates, the prevalence of variants of concern, and their genomic sequencing capacity.

But the PM today refused to say whether Brits will be allowed to jet off on holiday from May 17 in a massive blow for the industry.

International travel is currently banned except for a handful of permitted reasons.

Foreign holidays are expected to resume sometime after May 17 – although the Government said that the current state of the pandemic abroad and the slow progress of vaccinations in other countries means they cannot yet confirm a restart date.

When asked about whether travel abroad would restart next month at his press conference this afternoon, the Prime Minister refused to be drawn.

But he did say they would announce a date for the opening of borders before May 17.

The Global Travel Taskforce will publish its report, setting out more details on the traffic light system, later this week.

People heading to low-risk “green” countries will not need to isolate on return to the UK, but they will need to take Covid tests before and after they arrive home.

Travellers arriving into the UK from “amber list” countries will have to self-isolate at home and take Covid tests pre-departure and on Day 2 and 8 after they arrive.

It has been suggested that vaccinated travellers may be able to avoid certain restrictions, but that has not been confirmed.

Travellers from “red list” countries will have to isolate in a quarantine hotel for 11 days at a cost of £1,750, as well as taking Covid tests pre-departure and on Day 2 and 8 after they arrive.

Currently people arriving in the UK from abroad are required to self-isolate for 10 days.

GREEN: Anyone returning from these countries must take a pre-flight Covid test at their own cost, then take a further test within days of landing to check for new strains;

The government urged people not to book summer holidays, saying: “It is too early to say which countries will be on the green list when non-essential
international travel resumes.

“These decisions will be driven by the data and evidence nearer the time, which we cannot predict now.”

While certain countries will be placed on the green, amber and red lists at the relaunch of foreign travel, the government has confirmed that destinations will be moved into different categories as new Covid date emerges over the course of the summer.

READ  Flights: Pilot reveals the real reason plane tray tables must be up for takeoff

This could result in similar scenes to last summer, when holidaymakers were left scrambling for flights back to the UK as countries were added to the quarantine list with just 24 hours notice.

Meanwhile, a single-shot Covid jab that could save foreign holidays for youngsters was last night hailed as “a game changer” by travel bosses.

The one-dose Janssen jab is set to be available by July for 18 to 30-year-olds — so they could be off to party islands like Ibiza within months.

Health minister Ed Argar said the Prime Minister was trying to give “as much foresight and as few surprises as possible” about the possibility of international travel this year during his press conference today.

Pressed on whether Europe was likely to be on the “caution list” of destinations due to a surge in cases, the minister replied: “We are seeing many of our friends in Europe seeing an increase in infections.

“That is one of the reasons why we have to be very careful, that as we see an increase across the world in infections that we get this right.

“Because one of the things we don’t want to see – and just as the vaccination programme is working so well – is getting new variants or risking new variants getting imported into this country.”

He said he’ll be spending his holidays “at home in sunny Leicestershire.”

The government has also announced it will allow a number of people to attend public events such as football matches from this month in trials of a virus certification system.

But it has not made clear whether it will issue “virus passports” for international travel, an idea backed by many tourism-dependent countries and airlines but opposed by more than 70 MPs.

When can I go on holiday abroad? Latest travel update

The UK has already given out more than 31 million first vaccine doses and over 5 million second doses.

The rollout has far outstripped popular holiday destinations such as France.

This has boosted the public mood after more than 126,000 people died from the virus in the United Kingdom, the highest toll in Europe.

Hopes for Cyprus, Greece and Turkey summer holidays as TUI boss says even Caribbean could be on cards