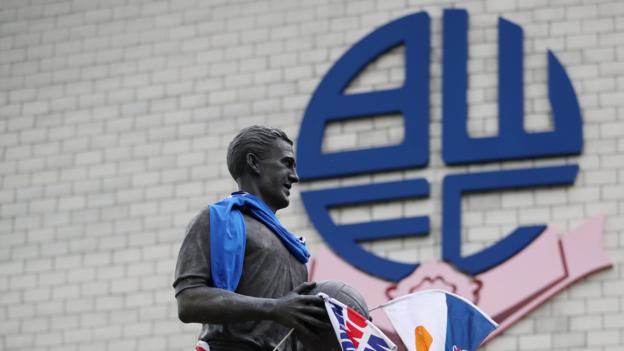 The League One club, in administration since May, have said “discussions are ongoing with all parties” and that a further statement would be issued “later on Tuesday”.

A proposed takeover by Football Ventures (Whites) Limited appeared to have collapsed on Saturday.

Bolton’s administrators have warned they are on the brink of liquidation.

In a statement issued on Monday, they said if they were unable to resurrect the move the club was “not in a position to carry on trading” and was set to enter liquidation, leading to the “inevitable loss of more than 150 jobs”.

Should a takeover not go through, a 14-day notice of withdrawal of the Trotters’ membership of the EFL could also be reinstated.

“The current situation cannot continue,” the EFL said in a statement issued on Saturday, prior to Monday’s news.

“If a successful conclusion to a sale is not found or there are no credible plans for the club to continue the season in administration by the planned board meeting at 17:00 BST on Tuesday 27 August 2019, then the EFL board will consider lifting the suspension on the notice of withdrawal of the club’s membership of the league.”

The proposed takeover has been beset with problems for weeks and is still waiting to be completed.

Laurence Bassini, who failed with his own bid to buy the club before it went into administration, was awarded a court order blocking the sale on 8 August.

That was amended and adjourned six days later, but the troubled club are now on the brink of disaster.

Earlier on Tuesday, it was announced that C&N Sporting Risk’s proposed takeover of fellow League One side Bury had fallen through, with the Shakers now facing expulsion from the EFL.

How did Bolton reach this point?