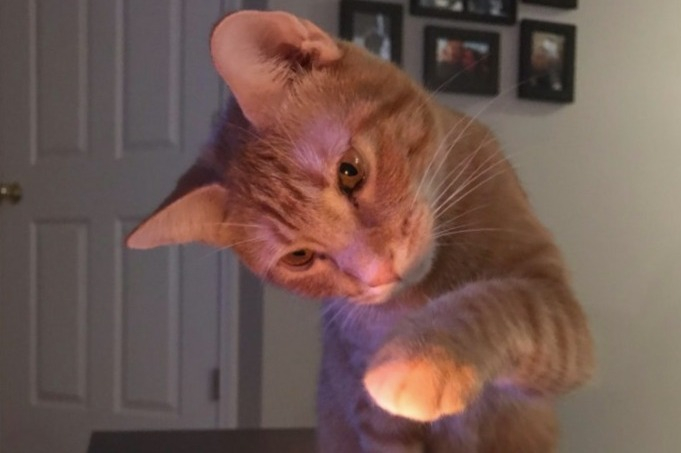 A BLOKE is in shock after his wife fell pregnant and realised the cat was to blame by making holes in their condoms.

The dad-to-be explained he and his wife welcomed their first child, a boy, last year, but the pregnancy was stressful due to preeclampsia and their son being born two months early.

Due to this and the current pandemic, the couple decided to hold off having their second child, and moved to condoms as a form of birth control as his wife felt sick on the pill, and was trying to lose weight.

Posting the bizarre tale to Reddit, he wrote: “We thought rubbers would be enough, but that’s where our cat comes in…”

He explained their ginger tom was an “evil genius”, who gets into every drawer, cabinet and door.

The bloke said: “It’s so bad that for weeks after adopting him I thought there was poltergeist in the house because each morning I’d wake up to find every single cabinet door in the kitchen wide open!”

Suddenly it hits me… that damned cat

He revealed he usually stores the condoms in the bathroom drawer with his Q-tips, which the cat loves to shred.

The dad-of-one said: “He must have seen the box of Q-tips in the drawer when I put my rubbers away, because not even an hour later I stumbled upon a horrific scene of chewed plastic straws, shredded cotton fluff and shiny gold condom wrappers scattered around the gapping drawer that once contained them…

“I didn’t think anything of it at the time and just cleaned up the destroyed Q-tips and put the condoms that had spilled everywhere back into their box without a concern in the world.”

Later that night he grabbed one of the condoms “thinking nothing of what happened earlier”.

That was until three weeks later, when his wife began to experience pregnancy symptoms such as nausea.

She still had some pregnancy tests, and to her horror they all came back positive.

The pair were puzzled as to how it could have happened, until the bloke remembered the cat getting into the condom drawer.

He revealed: “Suddenly it hits me… that damned cat.

“I ran over to bathroom drawer where I kept the condoms, dumped out the box on the counter and started to inspect each miserable little foil square.

“Sure enough, several had noticeable scratches, teeth marks, and even full blown punctures in them…

“Which leads me to f**kup number two, not checking to see if the cat chewed on any of my rubbers weeks before when he had gotten into that drawer…”

The pair are now getting ready to welcome their second child, with the bloke adding: “Can’t wait to explain to my new son or daughter one day that they owe their existence to the family cat!”

Nearly 1,000 people have commented on the post, in stitches over the story.

One person commented: “At least the kid gets a cool ‘how were you born’ story haha.”

Another wrote: “I can only imagine the shock when the test were all pawsitive !”

A third thought: “This should be the plug for ‘How I met your father’. 9 seasons later and the kids find out it was the cat.”

This person suggested: “I hope your wife is ok during this pregnancy. Seems you need a safe for your condoms now tho lol.”

Another said: “Cats are definitely smarter than one year olds.”

While this person added: “It would be rather funny if the kid ends up hating cats as an adult.”

Britain’s biggest family the Radfords splash out on a new £28,000 car

TOP OF THE KLASS

I’ve put on 2 stone during lockdown but I don’t care, says Myleene Klass

Meanwhile Aurora, Hunter and Oliver are among the names parents most regret giving their kids.

Plus, these are the most searched for baby names of 2020 so far – including Luna, Leo and Levi.

And these ‘retro’ baby names predicted to be popular this decade – including Ruth, Helen and John.

READ  Mum reveals she was ‘C-section shamed’ by her midwife who claims she should have had a ‘proper birth’ at 32 weeks
Share on FacebookShare on TwitterShare on PinterestShare on Reddit
newsgrooveJuly 19, 2020