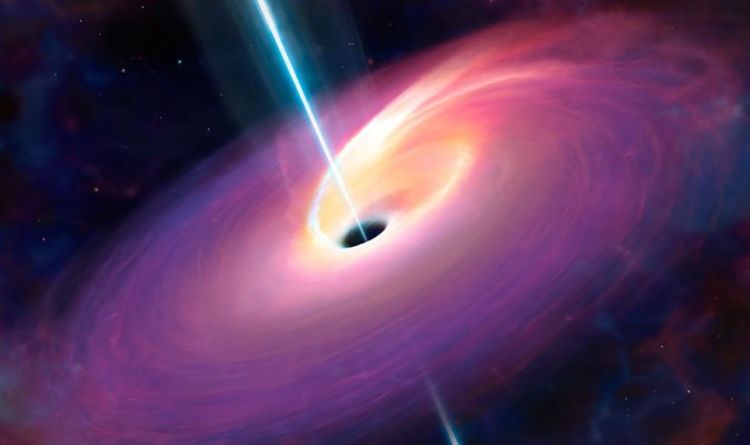 Scientists believe that black holes, one of the most mysterious entities in the Universe, are born when giant stars die and collapse in on themselves under their own gravitational weight – a process known as a supernova. However, new research has discovered these black holes could be launched across galaxies and the cosmos by the sheer force of the explosion of a dying star. When these black holes are booted away from their birth place, they can travel up to 43 miles per second, the research paper said.

The study examined 16 black holes in binary star systems – where at least one of the stellar objects is a black hole.

The reason binary systems were favoured is that when the black hole devours the mass around it, it emits a powerful x-ray which scientists back on Earth can detect and track its movements.

By tracking their movements, scientists from Australia’s Curtin University and the International Centre for Radio Astronomy Research (ICRAR) were able to trace the strange objects back to their origin.

The researchers were able to deduce that 75 percent of black holes in the Milky way had been given what is known as a Blaauw kick at birth, causing them to zoom across the galaxy.

With around 10 million black holes in the Milky Way, this means 7.5 million are shooting through the galaxy.

However, they do not shoot around for eternity, with the velocity eventually diminishing until the black holes get caught up in a star cluster.

Lead author astronomer Pikky Atri of Curtin University and the International Centre for Radio Astronomy Research (ICRAR) told ScienceAlert: “This work basically talks about the first observational evidence that you can actually see black holes moving with high velocities in the galaxy and associate it to the kick the black hole system received at birth.

“We tracked how these systems were moving in our galaxy – so, figured out their velocities today, moved back in time, and tried to understand what the velocity was of the system when it was born, individually for each of these 16 systems.

READ MORE: Time travel BREAKTHROUGH: Time can be stopped and this is how

Scientists believe the most common instance is when a star, thousands of times the size of our sun, collapses in on itself when it dies – known as a supernova.

Another way is when a large amount of matter, which can be in the form of a gas cloud or a star collapses in on itself through its own gravitational pull.

Finally, the collision of two neutron stars can cause a black hole.

The gist of all three ways is that a massive amount of mass located in one spot can cause a black hole.