Ewan McGregor and Chris Messina have said they are proud to star in Birds Of Prey And The Fantabulous Emancipation Of One Harley Quinn because it “tackles everyday misogyny”.

McGregor plays mob boss Roman Sionis in the Harley Quinn spin-off, while Messina takes on the part of his right-hand man Victor Zsasz.

Speaking at the premiere of the new DC movie, McGregor said: “We talked about it – we were both really proud to be in a film that tackled misogyny, not only in sort of the extreme ends of misogyny, but also the everyday, mild misogyny that women have to put up with.

“This film’s peppered with references to that,” he continued. “We were just proud to be part of that and to be the misogynists in the movie, to help flag that up to guys who need to know that that time’s done.”

IT’S ABOUT TIME: Ewan McGregor (@mcgregor_ewan) says he was happy to lend himself to a feminist film that “tackled misogyny.” He stars as the antagonist in #BirdsofPrey pic.twitter.com/II5D06q32A

The movie will be released in the UK on February 7, 2020. It will also boast a star-studded soundtrack, including Normani and Megan Thee Stallion, Doja Cat, and Halsey.

The latter’s contribution was co-written by Bring Me The Horizon’s Oli Sykes and Jordan Fish.

READ  First trailer for The Aeronauts soars into view

Fish confirmed the news on Instagram, writing: “Myself, Oli and Halsey wrote a song on this album called ‘Experiment on Me’ – it will be released alongside the film at the beginning of next month. I am excited for you to hear it.”

Roswell Season 2 Episode 4 Review: What if God Was One of Us

Got Marvel and DC withdrawal? Here are 20 films to get your superhero fix during quarantine

Rambo true story: Is John Rambo based on a real person? 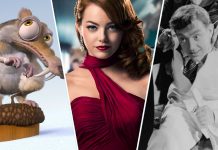