Angela ‘Big Ang’ Raiola made an emotional final appearance in the season finale of Mob Wives.

The late reality TV star was shown talking about her battle to beat lung and brain cancer – which tragically took her life on February 18. 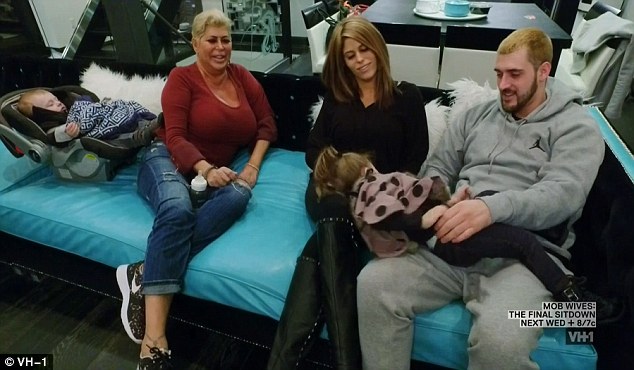 ‘This might be a rough one’: The reality star was open about her struggles with cancer

‘The doctors just told me that I have Stage 4 lung and brain cancer, so I guess I have a long fight ahead of me,’ Ang emotionally told the cameras.

‘I hate it,’ she said as her family urged her to stay positive and think of her grandchildren.

‘I have to start chemo and radiation right away. I f***ing hate cancer. They say it kicks the s**t out of you then you kick the s**t out of it, but I don’t know if I could, this might be a rough one.’

Ang the revealed she had kicked Neil out of her house again. 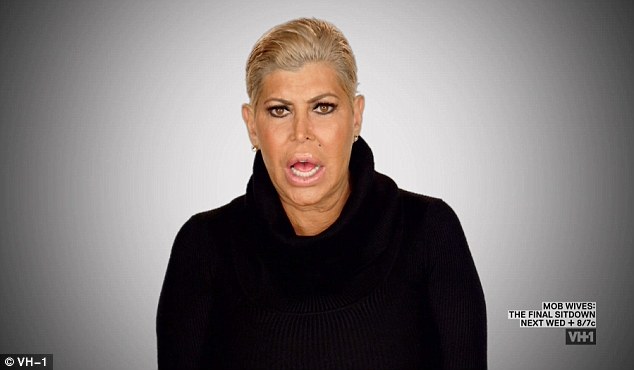 Revealing: Big Ang also revealed she had separated from her husband Neil, confessing he stressed her out 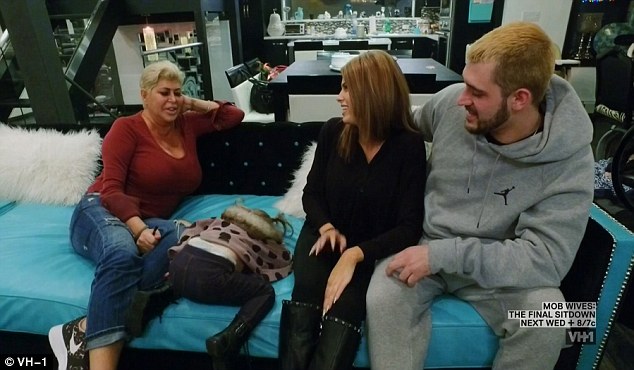 ‘I got rid of everything unnecessary in my life and Neil and bulls**t drama are the first things to go,’ she said.

‘The doctors say I am not allowed any stress and all he does is stress me out. From now on it is all going to be about me, my grandchildren and my kids, thats it.

‘I am going to live life to the fullest and do everything on my bucket list. Over the years I stayed out of the drama because that is the type of person I am. 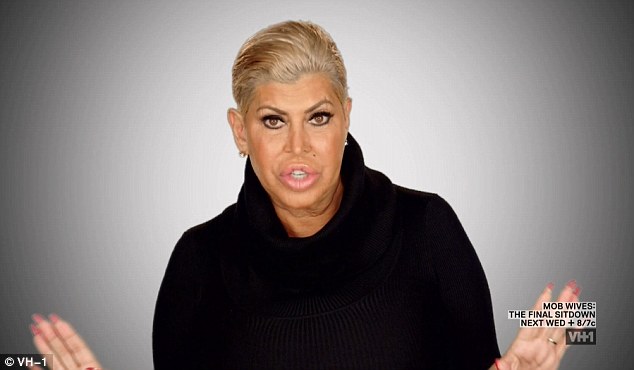 Optimism: The star said she planned on doing ‘everything on my bucket list’, including a trip to Italy

‘I love the time that I shared with the girls and love each and everyone of them in a special way, I am still Big Ang and everyone loves me sick or not.’

Elsewhere violence flared between enemies Drita D’Avanzo, Karen Gravano, Brittany Fogarty and Marissa Fiore during a sit down meeting to settle their differences.

The anger between the women was so extreme that the show’s bouncers and to step in as they tried to fight each other as the cameras rolled. 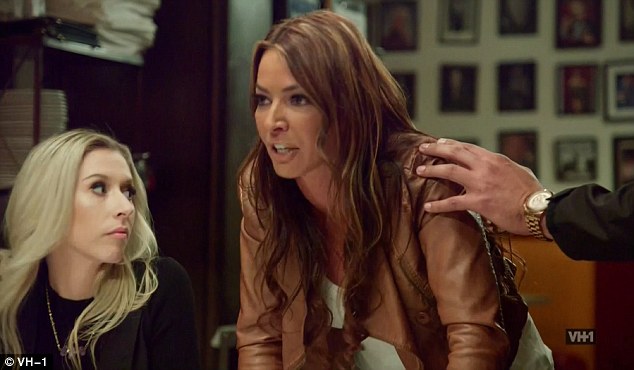 Boiling over: Drita D’Avanzo could hardly contain her anger as she attempted to settle her differences with Karen Gravano and Marissa Fiore 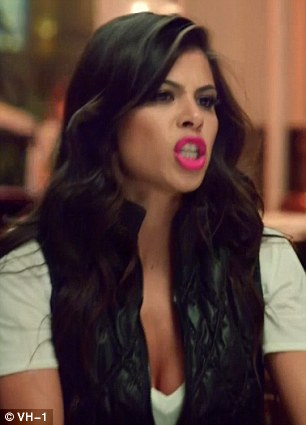 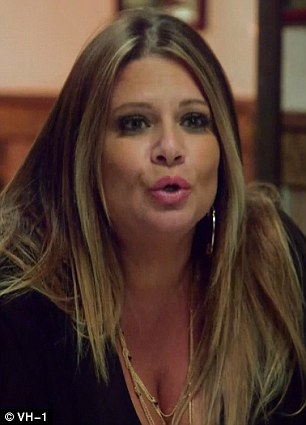 The drama began as Drita complained about Karen to Big Ang.

‘Karen Gravano is going to have to f**king move, this is my island. I run this island, I’m going to kick her out. I will torture her every day of my life until she gets the f**k out of here,’ a heated Drita told Ang.

Karen the noted the cameras that she had to put an end to the tension with Drita so that it did not spread to their children. 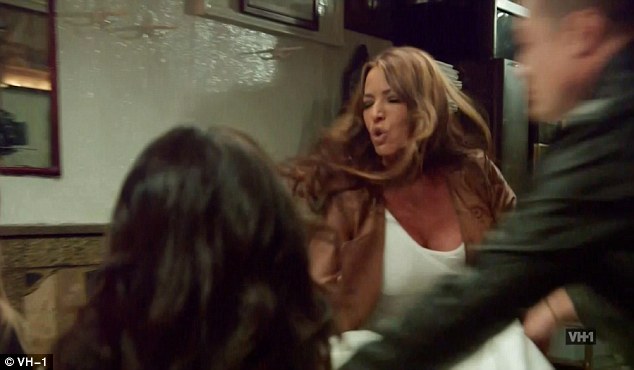 Unleashing her wrath: The anger between the women was so extreme that the show’s bouncers stepped in as they tried to fight each other as the cameras rolled 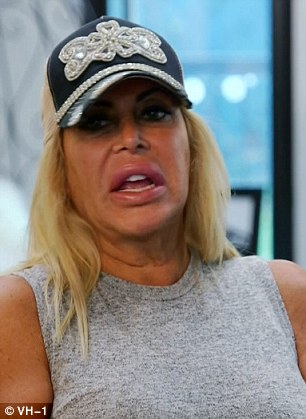 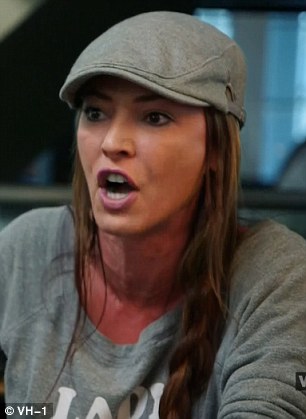 Letting it out: The drama began as Drita complained about Karen to Big Ang

‘Otherwise it is going to get ugly, super ugly,’ she said.

Drita then called Marissa Fiore, who had told the ladies at an earlier lunch that Drita had ‘selective hearing’ over insults.

Drita went straight on the attack and told her she was ‘ready to play gangster’ with her detractors as Marissa accused her of having a Napoleon Complex. 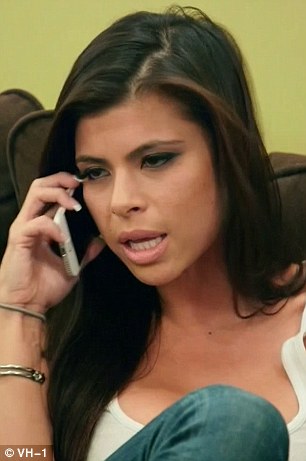 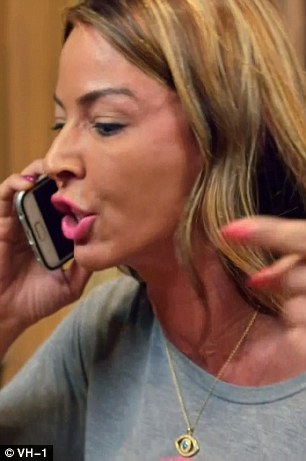 Confrontation: Drita then called Marissa, who had told the ladies at an earlier lunch that Drita had ‘selective hearing’ over insults 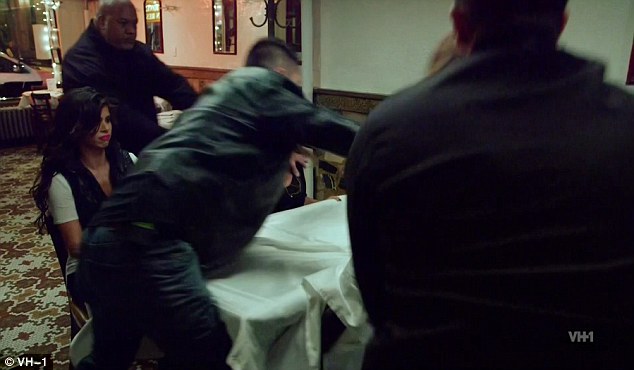 Escalating: Bouncers jumped in as the situation continued to escalate

‘I have been nothing but nice and respectful, that is gone,’ Drita screamed as she accused her of being a ‘rat.’

Rita then screamed at producers to set up a meeting with the women and warned that if any of the show’s bouncers touched her they ‘were going to get laid the f**k out.’

Drita and Brittany went to the sit down together to meet Karen and Marissa at a closed restaurant, with Drita saying she was ready to reassert herself as the ‘boss’ of the group. 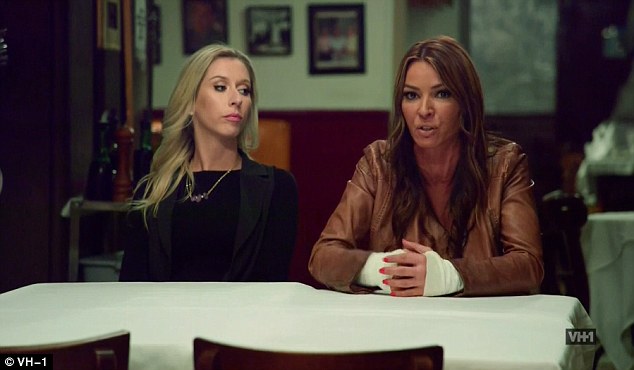 Awaiting their arrival: Drita and Brittany went to the sit down together to meet Karen and Marissa at a closed restaurant, with Drita saying she was ready to reassert herself as the ‘boss’ of the group

‘I’m going to fight her if that is what she wants to do,’ Karen told Marissa in the car.

‘But first before we fight we are going to talk about it. I am finally going to shut her up once and for all.’

Carla Facciolo predicted that the four women ‘would kill each’ other while Renee Graziano suggested that violence would maybe defuse the situation longterm. 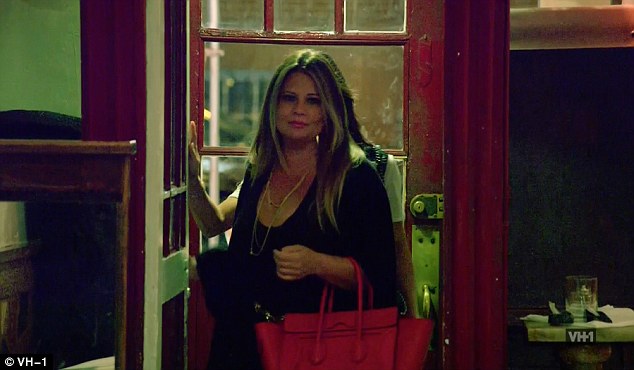 Arrival: Karen was joined by Marissa as they headed towards the heated situation 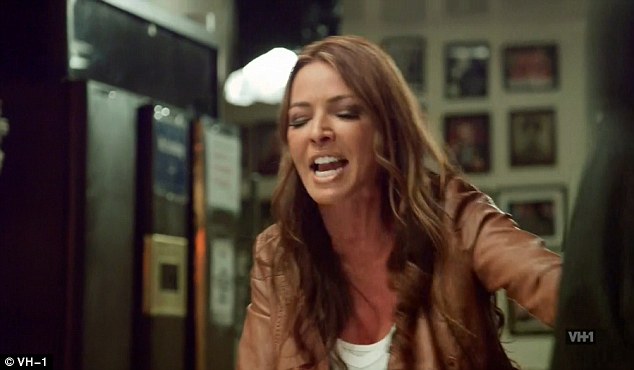 Instant spark: It did not take long for the action to start when all four women sat around a table together

And it did not take long for the action to start when all four women sat around a table together, with Drita hurling insults as Karen and Marissa walked through the door.

Surprisingly it was Marissa and Brittany who got straight into it, with Brittany demanding to know what gave Marissa access ‘to this culture.’

Brittany instantly had to be grabbed and held back by a security guard as the expletives and screams flew. 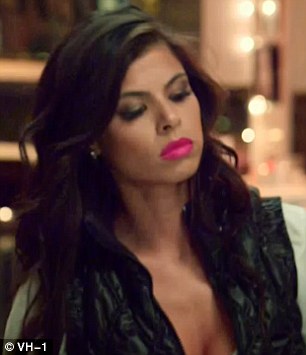 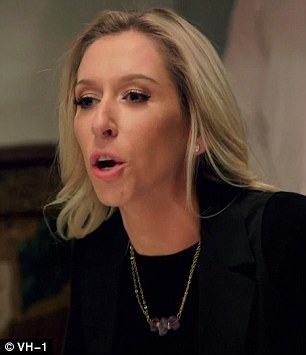 Big questions: Surprisingly it was Marissa and Brittany who got straight into it, with Brittany demanding to know what gave Marissa access ‘to this culture’

‘When I look at Brittany honestly I feel bad for her, somebody needs to bless that b***h,’ Marissa told the cameras. Karen and Drita then got into it as the bouncers stepped in between them and held the women back as they lunged for each other.

‘Karen you are f***ing dead, you are dead,’ screamed Drita.

Tables and chairs went flying as Brittany tried to get back involved and the bouncers ushered her and Drita out of the back of the restaurant. 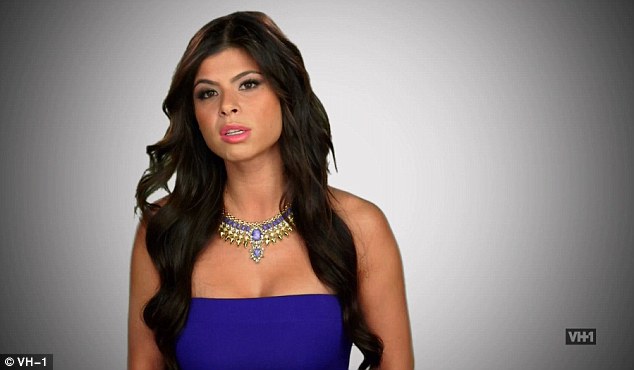 Speaking her mind: Marissa admitted to cameras that she felt ‘bad’ for Brittany

‘Every time I see you I am punching you in the face,’ Drita screamed at Karen.

Drita then screamed obscenities at the producers sitting in the back of the restaurant, who came out and asked if they could carry on a conversation without more violence.

‘She doesn’t want to get to the point, the girl is an animal,’ Karen told the show’s executive producer as Drita screamed at her.

War of words: Karen and Drita didn’t hold back as their conversation quickly escalated 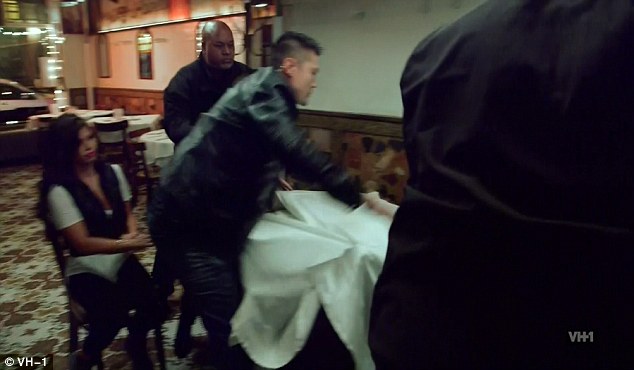 Erupt: Marissa watched on as bouncers jumped in to put an end to the explosive scene

‘I didn’t even know I could this angry any more, I want blood,’ Drita told the cameras as Karen shouted that her husband was cheating on her.

Eventually the producers were forced to call it a night to prevent any more violence.

‘You are irrelevant b***h, that’s what I showed up to tell you,’ screamed Karen as she called Drita a ‘green screen gangster’ and a ‘fake, fraud, rat b***h.’ 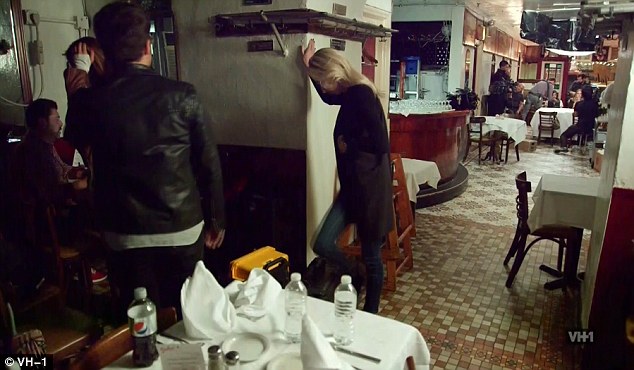 Intervention: The executive producer stepped in to diffuse the situation, asking cast members if they were willing to continue the conversation or not

After the eventful evening Karen said that she was only interested in loyalty and that she was bound by the lifestyle to Ang, Carla, Renee and would always be there for each other.

‘I have no idea what the future for Karen Gravano holds, my father gets out of jail soon and where ever he lands I will be by his side, she told the cameras dramatically.

‘I am Karen Graven and my crime is giving the wrong people respect.’ 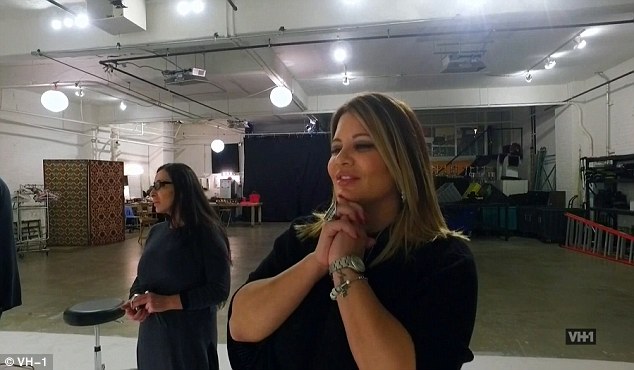 Proud mom: The star watched with pride as her daughter modelled for cameras 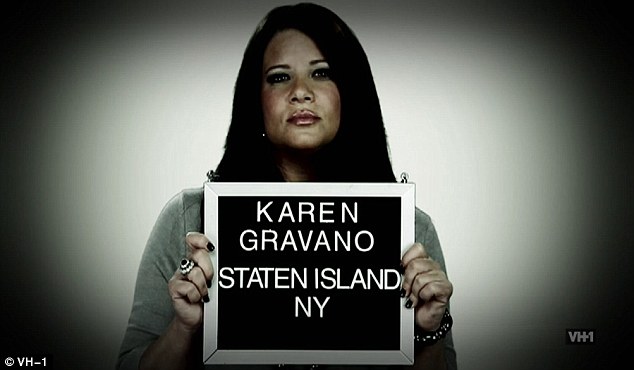 Quality of character: Gravano revealed to cameras her crime was ‘giving the wrong people respect’

Renee told the cameras she was in a great place and she was concentrating on moving forward as she predicted not all of the women would remain friends.

‘I am Renee Graziano and my crime is falling in love with a lifestyle that was made for men,’ she told the cameras.

Carla Facciolo told the cameras that she was focussed on her children and did not want them to grow up in the mob lifestyle. 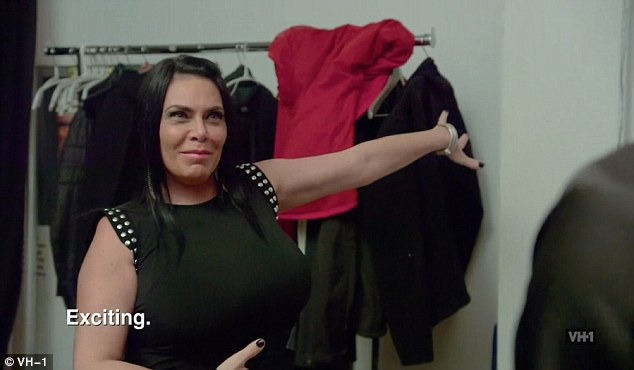 Good place: Renee Graziano was happy to share that she was doing well in her life

‘I am Carla Facciolo and my crime is being loyal to a fault,’ she said.

Drita D’Avanzo told the cameras that she had been through a lot and that no one would be able to break her family’s bond.

‘My family is in the best place it has ever been and I want it to stay that way,’ she said.

‘As far as Karen is concerned, that back-stabbing story-telling b**ch is irrelevant to me and my life.

‘Of course Ang will always be in my life, she has always been a true friend to me and I will be the same.’ 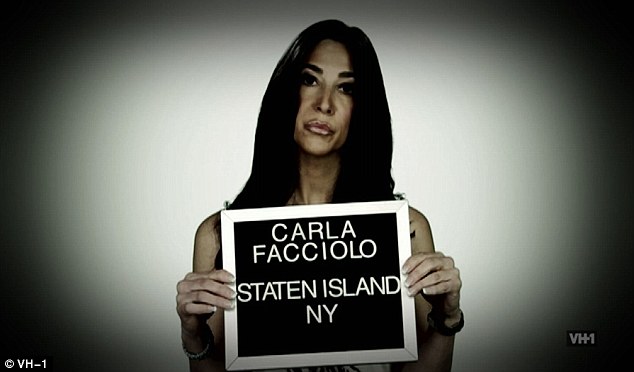 Loyalty: Carle Facciolo confessed that her crime laid with ‘being loyal to a fault’

Brit Awards 2020: Harry Styles and Lizzo steal the show with their love in and we totally ship them

Brit Awards 2020: Tyler, The Creator slams Theresa May for banning him from the UK in acceptance speech