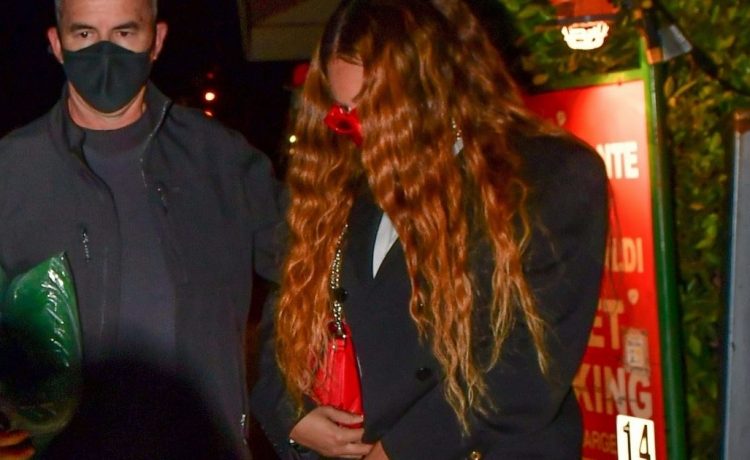 Beyonce and Jay Z emerged from lockdown for a rare romantic night out to celebrate Valentine’s Day.

The famous lovebirds took time off their parenting duties to their three children: Blue Ivy, nine as well as three-year-old twins Sir Carter and Rumi.

Love was in the air when the couple had a low-key dinner out in Santa Monica, California on Sunday.

Dressed like the superstar she is, Crazy In Love hitmaker Beyonce made a statement by wearing all red accessories.

The singer had scarlet sunglasses, handbag and heels all to match.

A cascade of curls bounced off her figure as she strutted out in her heels.

Her figure appeared statuesque in her sky-scraper heels when she made her stylish exit from the restaurant.

Jay-Z was hot on her heels, dressed all in black.

They were married in 2008 and they’ve never looked back.

But their incredible love story goes all the way back to when their paths first crossed in the early 2000s.

Recently, the queen of music shed some rare light on her family life.

The singer divulged what it’s really like to raise three children during the pandemic.

Admittedly Beyonce revealed she had become a “better listener” since she welcomed her three children into the world.

She told British VOGUE magazine in November: “I have become a better listener. Blue is very smart, and she is aware that there is a shift, but it is my job as a parent to do my best to keep her world as positive and safe as can be for an eight year old.

“My best advice is to love them harder than ever. I let my children know that they are never too young to contribute to changing the world.”

She added: “I never underestimate their thoughts and feelings, and I check in with them to understand how this is affecting them.”