Bettina Campolucci Bordi is a chef well-known for her plant-based and free-from recipes.

But she also loves to travel and trying new foods from around the world.

We chatted to Bettina about forward-thinking Copenhagen, digital detox in Mongolia and a surreal overnight stay in Guangzhou en route to Bali.

What is your favourite on-the-road moment?

A road trip I did with friends from Barcelona to San Sebastián, through Bilbao. One of our group had been a pupil at the Basque Culinary Centre in San Sebastián, so had great insider knowledge, and we stopped at lots of amazing non-touristy eateries.

One stop looked like an industrial area but we walked in to find an incredible traditional sidrería [cider house] filled with barrels and Spanish locals who must’ve wondered how on earth we’d found it.

I was living in the south of Spain at the time and wasn’t prepared for how different the north would be — the food cultures in San Sebastián and Bilbao are incomparable.

And your favourite city?

Copenhagen. By passport, I’m Danish. My father’s Norwegian and my mum is Danish-Bulgarian, so I’m quite a mix, and I grew up in east Africa for 11 years, then Sweden.

Copenhagen didn’t used to be a big foodie city but has become a massive food capital and also extremely forward-thinking in terms of the environment, organic produce and foraging in the wake of Noma, which I finally had a booking for last summer but am sadly still yet to get to.

Besides food, it’s also a fab city to cycle and walk in. Tivoli Gardens is a magical blend of interesting architecture, fairground rides and beautiful gardens (adult admission £15.60).

What keeps you sane on the road?

I’m very organised. I pack things in different compartments and travel bags — a bag for cables, a bag for medicines, you name it.

My top tip would be to always travel with one of those toiletries bags that folds over into three sections. I always take tea bags and instant porridge too.

When have you been most frightened while travelling?

I once landed in Guangzhou, China, for 21 hours en route to Bali via a cheap flight and was instantly struck by how sinister it felt — think Black Mirror crossed with The Terminator.

We drove through a completely empty city surrounded by high-rise buildings, stayed in a really dodgy hotel, then spent the whole of the next jet-lagged day walking through the city with zero other tourists.

The whole experience was surreal but, in retrospect, an amazing experience because it’s rare to go somewhere and feel like you’re the only tourist who’s ever been there.

What is your best souvenir?

A wool blanket from Mongolia. I cook on retreats in Mongolia with a company called Reclaim Yourself.

One of the camps where we set up sells the most incredible wool products and I always buy something from them, one of which is my turquoise and white wool blanket that I keep on my sofa.

What has been your most life-changing experience while travelling?

My experiences in Mongolia, because while there I was completely detached from anything mobile or digital for at least ten days.

The first time I did it, I wasn’t prepared, and it was a stark realisation how dependent most of us are on digital things.

It was mind-blowing — I remember going into the desert and thinking that I wouldn’t be able to speak to my daughter or husband for nearly two weeks.

My mind starting playing tricks on me and I was worried that if something happened, they wouldn’t be able to get hold of me. Eventually I took a deep breath and calmed down.

I’m not a fan of the durian fruit. I know many people think it tastes like custard, which I was hoping it was going to for me, but all I taste is furry sick.

Also, natto, which is fermented soybeans. I attempted to eat it in Tokyo but it’s just slimy, sticky and stringy — super gross.

I’d love to do a road trip to Scotland and am hoping to do a retreat in the wild Highlands.

I really want to head to New Zealand and experience some of the Great Walks. And Mexico is also on my bucket list — specifically Oaxaca — for the food, as are Israel and Singapore.

Celebrate: Plant-Based Recipes For Every Occasion by Bettina Campolucci Bordi is out now, published by Hardie Grant


MORE : Desperate to hit the slopes? These are the ski resorts to book for 2022


MORE : These are the top staycation destinations for autumn – according to Tripadvisor


MORE : What are the rules for travelling to Spain from the UK? 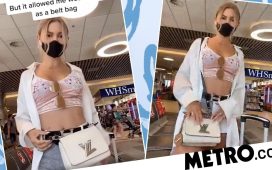 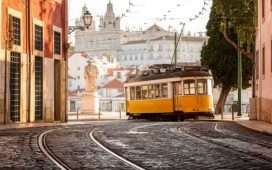 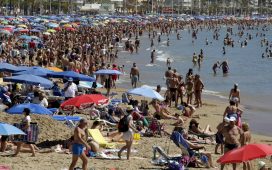