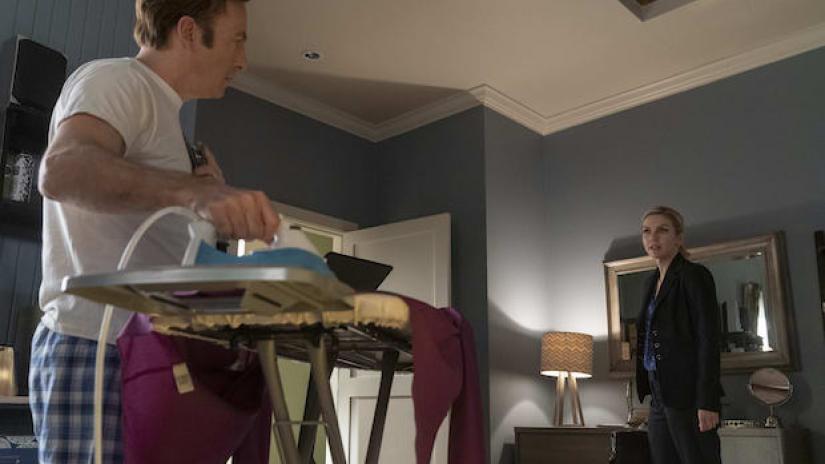 Even if the second night of AMC’s grand two-night premiere of Better Call Saul can’t help but feel a little less ceremonious than last night’s premiere, it’s still an exciting escalation of the story and an interesting rewind back to some of Season 1’s rhythms. “50% Off” also feels focused on Nacho in a way that at times felt missing in Season 4. After watching the episode’s final moments, it seems like we won’t be away from Nacho for too long in the near future.

As someone that has always enjoyed Michael Mando’s performance, my biggest complaint of Season 4 was the three-episode stretch in the middle of the season where he was essentially told to relax off-screen by Gus. Mando somehow is able to bring an air of decency to this very duplicitous person, and throughout the show he’s proven to be incredibly smart and capable. I’ve come to care about Nacho, maybe not as much as I cared for his closet analog, Jesse during Breaking Bad’s run, but certainly more than I cared about Saul. Every time Nacho finds a way to get out from under the thumb of a Salamanca, another sprouts up ready to apply some pressure.

Trying to make sure that Nacho knows where his loyalties lie, Gus pulls him out of his home and orders threatening behavior toward Nacho’s father while Nacho is forced to watch. While the camera mostly shoots Gus intimidatingly through the rearview window, Gus orders that Nacho get close to Lalo and report back on any of his doings or findings in regard to Gus’ unsanctioned areas of business. It’s another exercise in tension that lets us know that we’re in for an anxiety-ridden season.

That rearview mirror angle isn’t the only stylistic flourish this episode features. First time Better Call Saul director and TV journeyman Norberto Barba begins the episode with a high-octane, debauched montage, and it features two burnouts going through their typical evening. These two fellows pop-back up later in the episode when they end up causing problems for the Salamanca crew and manage to help Krazy 8 get put jail. Nacho mitigates the situation with some heroics, which are again directed excellently, keeping the viewer oriented in the space and wisely cutting back to Lalo’s bemused reactions. Nacho’s move to save some of their stash from being discovered by the police is the perfect move to get Lalo to warm to him. Lalo can’t begin working on his plan to disrupt Gus’ cash flow if he’s worrying about issues on his side of the fence.

Meanwhile, Jimmy and Kim continue to tip-toe around each other. Kim seems angry at Jimmy, likely because she feels his influence led her to cross a personal moral boundary with one of her clients. It’s also if Jimmy can sense that she’s upset, and you can hear it in his tone of voice and carefully chosen words. Jimmy finally is able to break the silence with Kim by taking her to a beautiful open house, where she opens up and tells him what’s wrong. Jimmy really can’t seem to fully grasp how much he’s on thin ice with Kim, and he admits to following through with his discount plan, but assures that it won’t backfire (it does). However, the two are able to have some fun, and it’s the sort of moment the pair needed to stay close. (It’s also some serious House Porn, circa 2003. Props to the location scout.)

Back at work at the court house, Jimmy slips back into lawyer mode seamlessly, even if Oakley slips up and calls him by his real last name. Jimmy is back on his grind, but this time in Saul mode: flashy suits, Bluetooth, and a confidence that is unshakable. When ADA Suzanne Ericsen doesn’t warm to his charms, Jimmy devises a way to get himself trapped in an elevator with her. In a matter of 20 minutes, he’s able to settle a large amount of his cases, meaning he’ll be able to churn through more clients quicker and make more money. Jimmy, or should I say Saul, is working his way into that beautiful home, so he can fool around in the shower with Kim whenever he wants.

Jimmy is riding high leaving the courthouse, but it’s there that his life finally intersects with Nacho Verga once again. Krazy 8 is going to need a lawyer, just who did you think Nacho was going to call? Just as the courthouse scenes felt reminiscent of Season 1, Jimmy being pulled back into the cartel’s orbit feels like déjà vu. The Salamancas destroy everything they touch, and they better not a lay a hand on Kim!

Finally, Mike does a shitty job dealing with his grief and newfound free time. He volunteers to watch Kaylee when he obviously isn’t up to entertaining a child. Still, the old man is able to be sweet with his granddaughter, until she begins asking questions about her father and his history as a police officer. Mike quickly gets aggressive, yells, and scares Kaylee, an action that will likely have repercussions with Stacey. Mike can’t afford to alienate the only good things in his life, but he can’t help but feel responsible for the death of another good man.

Better Call Saul Season 5 is off to quite a dark start. Jimmy has only just begun practicing the law again, and already he’s being brought back into the criminal underworld that will eventually chew him up and spit him out. His relationship with Kim is barely hanging on by a thread, and Mike’s relationships aren’t faring any better. War between Gus and Lalo looks imminent. Anyone that’s complained about this show lacking action or about pace look like they’re going to have their thirst quenched. The rest of us are already rapt.