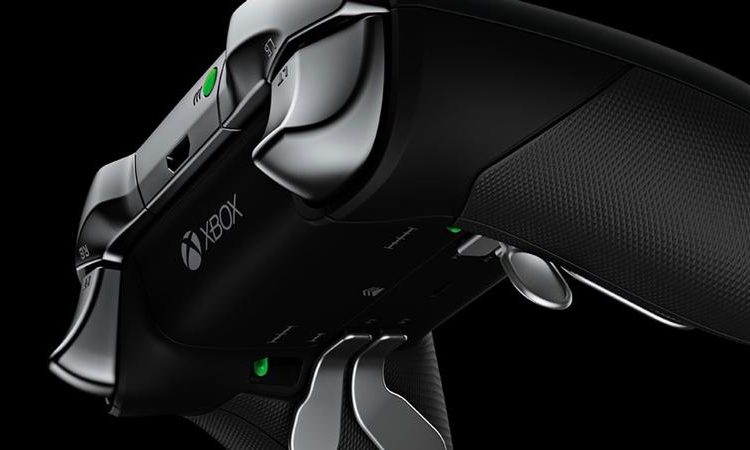 The Xbox controller is easily one of the best gamepads ever made, hence the minimal changes with the Xbox Series X|S – and it has the added perk of working well with PC games too.

Still, that doesn’t mean there’s no room for improvement, and if you’re looking to replace your controller – or improve your online shooter performance – you’ve got plenty of great options, both from Microsoft and third-party manufacturers.

An added bonus is that you can keep your existing collection of controllers if you upgrade to the newer Xbox Series X – unlike the PS5, the overwhelming majority of Xbox One controllers work on the newer Xbox.

And if you’re looking for some great games to make the most of your new controller, check out our pick of the best Xbox games. 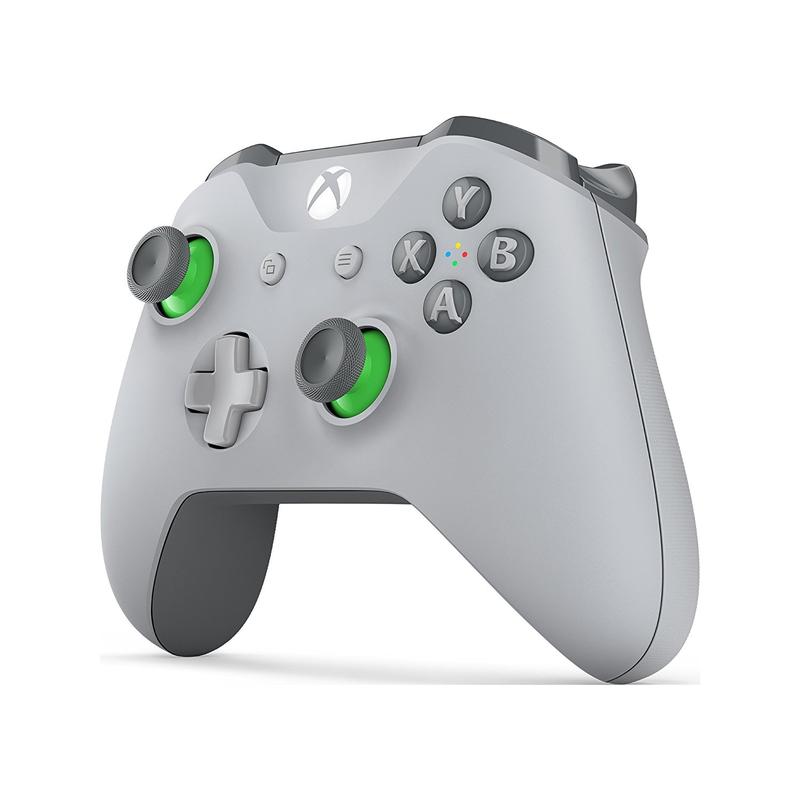 Sure, if you own an Xbox then you already have one of these controllers, but let’s be clear – they’re great, and if you’re looking for a second pad for multiplayer or to replace a broken controller, they’re the obvious choice.

Even better, Microsoft now offers the controllers in a huge range of different colours, including some two-tone setups and even a pair of Minecraft designs, so you don’t have to go for the basic white or black either.

Plus, it’s been continually tweaking and improving the controller, so if you buy one now it might be better than your original controller, with increased wireless range, Bluetooth support, and a standard 3.5mm headphone jack. 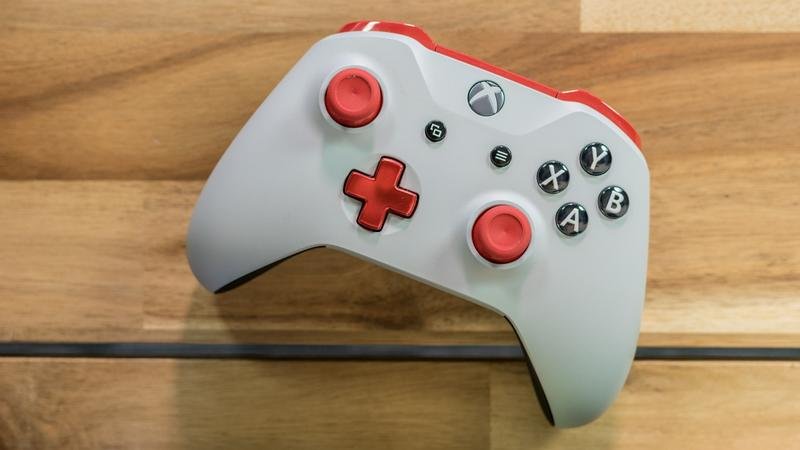 If you’re looking for a unique official Xbox controller, your best bet is to head to Microsoft’s Xbox Design Lab. The service allows you to design your own custom Xbox controller, changing the colour and finish of everything from the body of the controller to the triggers, D-Pad and analogue sticks. Want a grey controller with red highlights? That’s possible. Purple and blue with gold analogue sticks? Yep, that’s possible too.

In fact, there’s over 1 billion colour combinations available on Microsoft’s Xbox Design Lab. Ordering is an easy process too, as all your customisation options (colours, materials, engraving, grips, etc) will be mapped onto a virtual Xbox controller on-screen. This allows you to visualise the controller, making sure you get the perfect colour combination before you click the buy button.

The controllers don’t do anything that the standard controller can’t, but they do look amazing. 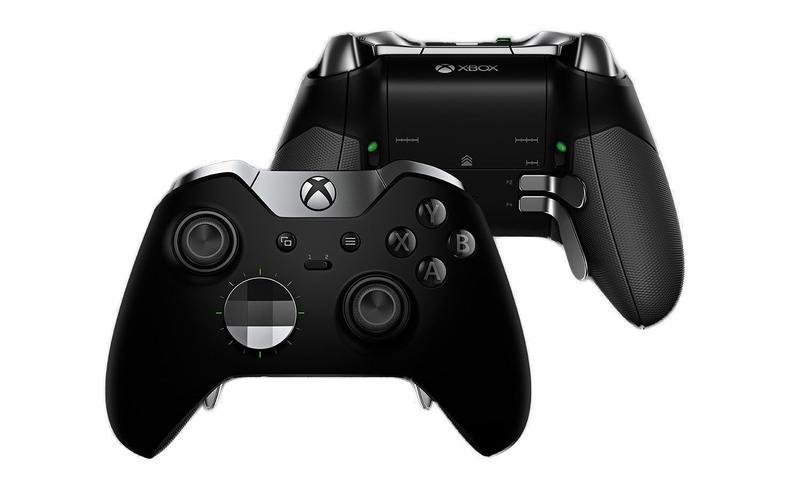 The price may give you pause for thought, but if you’re looking for an extra competitive edge online or simply want to tweak the finer details of your gaming experience, there’s good reason to consider the upgrade.

Alongside the slick black-and-chrome finish, the Elite controller boasts Hair Trigger Locks for faster firing in shooters, additional paddles on the back for more control options, and fully interchangeable control sticks and D-pad.

Swapping the control stick or D-pad is dead easy – the parts are magnetic, so all you have to do is pull them off and snap on the replacements. You can remap the controls for even more flexibility, and it comes with its own carry case with space for the controller itself and all the interchangeable components.

It all comes in an attractive black and chrome finish, and has a grippy texture – ideal for long or intense gaming sessions. You can also use it wirelessly, or wired using the included braided USB cable.

The only downside? It still feels silly to be paying over £100/$100 and getting a controller that relies on AA batteries – it’s a real shame Microsoft hasn’t invested in a rechargeable battery.

Note: We haven’t yet had the chance to test Microsoft’s upgrade Elite Wireless Controller 2, but on paper it should be even better than the first gen. We’ll update this once we’ve gotten one in the office to test fully. 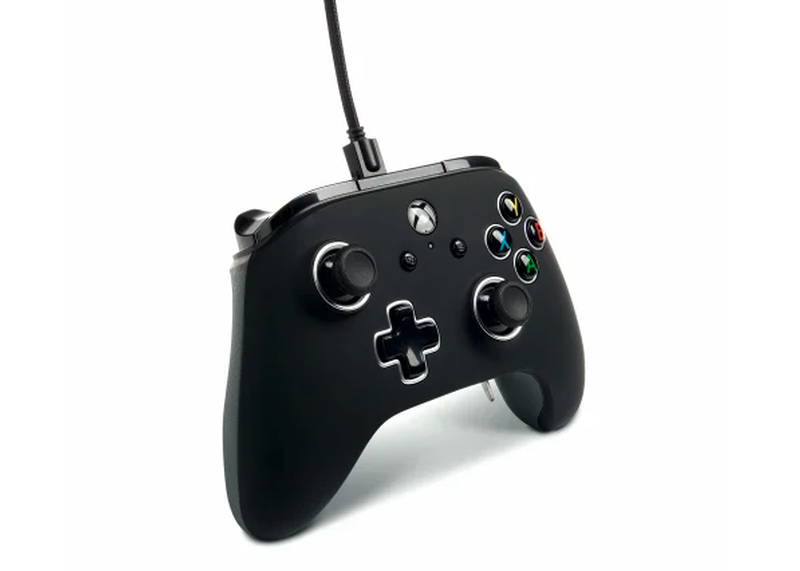 The matte-black controller sports a 4-paddle system, all remappable on the fly, giving you Pro-level features at a much cheaper price, and when they’re not in use, they can be removed – a simple, but genuinely helpful, feature. The controller also comes with swappable analogue sticks and anti-friction rings to help further customise the layout to your preference.

You’ll also find three-way trigger blocks to optimise performance in fast-paced online shooters. The triggers can be adjusted via switches on the back of the controller, allowing for different blocks depending on the game and weapons you use.

The controller is wired-only, negating the need to worry about battery life, and comes with a long braided cable in the box – along with a hard carry case to keep all the accessories safe.

If you want a premium Xbox controller at an affordable price, the PowerA Fusion Pro is a great choice. 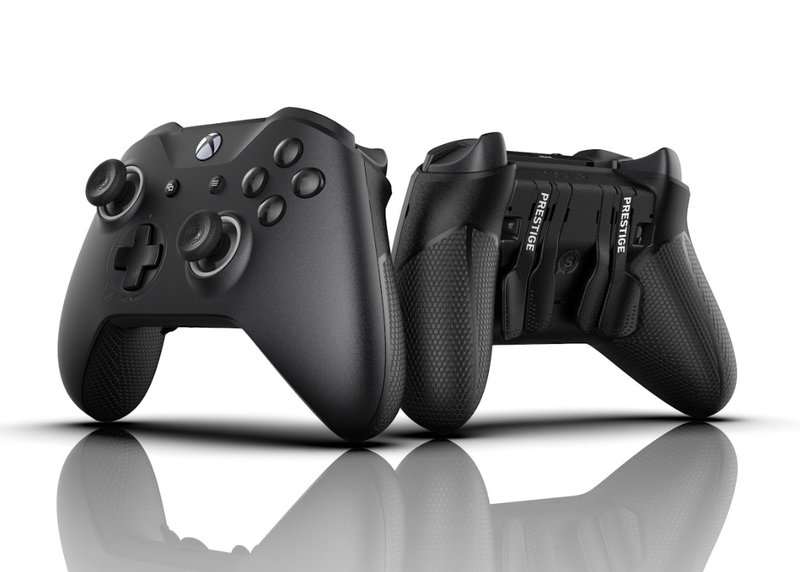 Scuf is arguably the leader in custom controllers, especially in the world of eSports where professional gamers need the best performance possible from their controllers. On the surface, Scuf offers everything that Microsoft’s Design Lab offers – custom triggers, a variety of colour options, buttons, analogue sticks, etc – but there’s much more on offer.

The Scuf Prestige is the greatest in the company’s high-performance range, featuring a patented four-paddle system as standard that provides a quick and comfortable way to react to evolving combat situations without taking your thumbs off the analogue sticks – although this does admittedly take some getting used to.

While most third-party controllers require a PC or Mac to remap keys, Scuf’s electro-magnetic remapping allows you to change the paddle functions on-the-fly with the use of an EMR key. This allows you to change mappings without the need to stop gaming and mess around on the PC – a huge plus in our books. Just don’t lose the EMR key…

You can also remove the faceplate and switch out the analogue sticks, allowing you to change the design of the stick (domed, concave, etc) or replace old, worn sticks. The Prestige comes with two sets of analogue sticks as standard, and additional sticks can be bought online.

The crowning glory for any budding eSports star should be Scuf’s adjustable hair trigger mechanism and trigger stop. This allows you to customise the tension and position of the triggers to get the best performance possible. You can also add a trigger stop with a flip of a switch on the side of the controller, allowing the trigger to return to its initial position faster than conventional controllers.

These adjustments may only save a fraction of a second, but it can be the difference between life and death in competitive online gaming.

As well as the eSports-focused features, the controller is amongst the lightest on the market at 262g and features a built-in lithium-ion battery that lasts around 30 hours per charge. The included 10ft braided microUSB cable certainly comes in handy too! 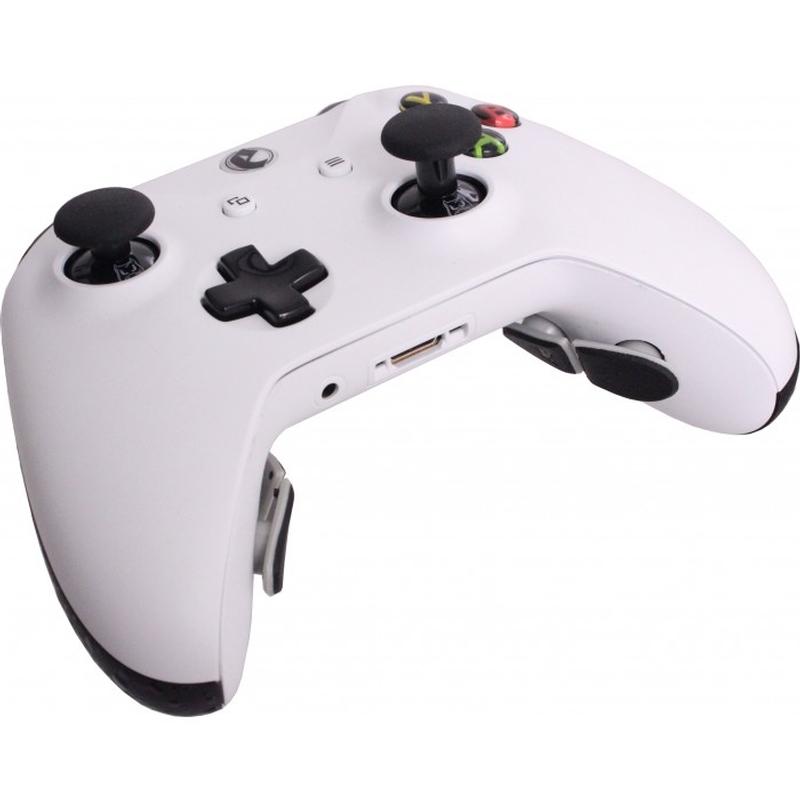 The Evil Shift from Evil Controllers is one of our favourite eSports-level controllers on the market at the moment. Why? It’s mainly due to the unique design of the paddle system, which makes using the remappable paddles a breeze.

Due to the shape and the fact that the paddles are mounted directly on top of the activator buttons, a tap – from any angle – will activate the paddle. As well as providing improved response time, it also responds to almost-missed presses (even a tap on the side of the paddle will activate it). The only downside is that adding paddles removes the vibration motor, so you will lost rumble in return.

They’re remappable too, using one of the simplest systems we’ve seen to date – when you want to remap, simply hold the View button and the paddle you’d like to remap, press the button you’d like to assign and you’re good to go! No app or other accessories required.

Aside from the paddles, the controller features hairpin triggers. They’re not adjustable like other controllers, but the trigger tension has been reduced by 50 percent without restricting the trigger. This provides increased reaction time without limiting game compatibility – an issue with some restricted triggers.

The triggers and buttons can even be upgraded to ‘tactile’ versions that have a shorter travel of 1mm, and a mouse-like clicky response. They’re great for shooters and some other game types, but be warned that the tactile triggers will reduce the analogue response you need for driving games.

Oh, the controller also offers interchangeable thumbsticks (three sizes to provide increased analogue stick accuracy, with an option for increased thumbstick tension too) and a range of soft-touch finishes to choose from.

Beyond the lack of rumble, the only real downside to all this is that if you want lots of features you’ll quickly rack up a big bill – go all in right now and you can spend over $550. You can spend a lot less by being really picky about which features you actually need though, and that’s where the Evil Shift comes into its own, letting gamers who know what they need build a custom pad that fits them just right. 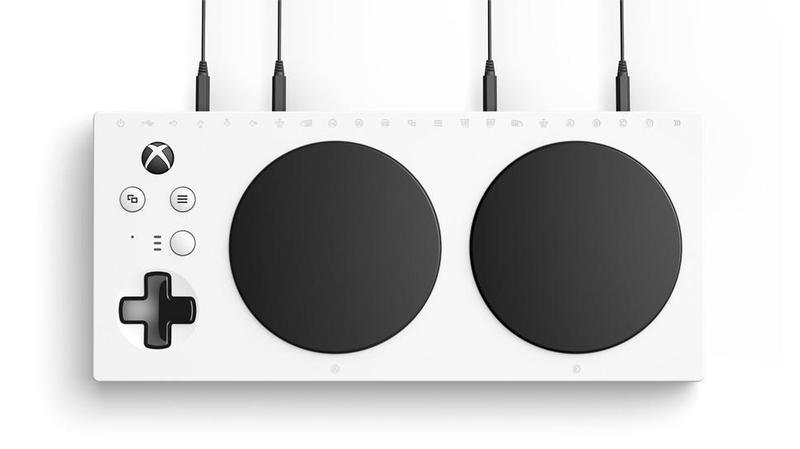 Microsoft’s official Adaptive Controller is one of the most exciting game controllers in years – even if the majority of gamers will never feel the need to use one.

Designed to improve accessibility to gaming for people who might find a traditional controller difficult, or even impossible, to use, the Adaptive Controller started life as a collaboration with a charity that was building custom devices to help military veterans keep gaming.

The core device features an over-size D-pad and two large buttons, designed to be easy to roll your hand or limb across. Beyond that though, there’s a whopping 21 inputs across the top and sides of the device – a mixture of USB and 3.5mm ports, making it compatible with a whole range of devices – which you can use to connect up any number of separate buttons, pad, controllers, pedals and more, for your own entirely customised gaming setup.

Each input defaults to a specific button on the traditional Xbox pad, but the inputs can also be switched around on a software level, and you can save up to three different input profiles to switch between on the fly, so that you can use different control schemes for different games without having to change the physical connections.

Then there’s also the new copilot mode, which lets you share inputs with another controller, so that two people can play a game together as the same character, each taking care of different controls.

There are threaded mounts on the base, designed to suit standard assistive mounts, along with a rechargeable battery with around 25 hours of life. This is a great example of Microsoft’s attention to detail: it uses USB-C as an input because the reversible design makes it much easier to use, and it avoids the fiddliness of replacing AA batteries.

That’s what the Adaptive Controller is all about. Just about every design choice tries to work around the sticking points that make controllers tough for people who are missing limbs or have mobility or coordination issues, while adding enough customisability to let every gamer make the controller their own.