The early months of any new year might seem dry until we get to the summer movie season. Sure, it might take a bit to get to those tent pole films that stir the imagination of children and also remind adults why they love going to the movies. At the same time, to completely write-off these early months really doesn’t do a service to some great (and really good) films that actually are coming out.

There are many different types of moviegoers. Those who only want award season films, those who want summer movies, and those who want it all. Personally, I fall into the third category which why I love these movies in the new year months. We get big films like Sonic the Hedgehog and smaller films like VFW. There are gems in any movie season and that’s precisely what lists like this aim to illuminate. Fret not, though, we’ve laid out what you’re going to need to see in movie theaters February 2020.

Reviews and opinions on Suicide Squad were mixed. Those that loved it really loved it. Those that didn’t care for Director Zach Snyder’s whimsical vision (and there were/are many who didn’t), positively hated it. Which is what makes Birds of Prey such an interesting proposition. With its classic Harley Quinn quips (in a role Margot Robbie seems born to play), hyper-violence, and darkly layered scenes, this movie seems to follow and depart from the film that preceded it. Which is a good thing because there appears to be a coherence to Birds of Prey that was all but absent from Suicide Squad. The story here is, predictably, simple. Harley Quinn and The Joker have parted company. She needs something to occupy her time and joins forces with Black Canary (Jurnee Smollett-Bell) and Huntress (Mary Elizabeth Winstead) among others. Soon they find themselves battling Black Mask (Ewan McGregor) as he has nothing but evil on his mind. Will Birds of Prey be a great film? Only time will tell but it seems particularly strong for a February movie.

With the tag line “Love Will Rip Your Heart Out” how can we not love this horror/sci-fi love story? Written, Directed (with Christian Stella) and starring Jeremy Gardner (The Battery), this film follows Hank (Gardner) as a guy whose girlfriend bails under odd circumstances. As if things couldn’t get any worse, he finds himself battling an otherworldly entity that wants in to his house. Fixing a relationship amidst a fight for survival sounds like a great time at the movies, right? With so many films available and so much content on streaming platforms, it is refreshing that such an out of the box idea presents itself. Sure, After Midnight is smaller than some of the films on this list. It’s ideas and scope, however, are the stuff of some of the greatest popcorn pictures.

This film is either going to be massive or a massive flop. How many movies show you their CGI main character, get widely panned for how it looks, and then go back to the drawing board? That’s exactly what happened back in May of 2019 when images of the first iteration of Sonic the Hedgehog emerged. Since then, the response to the redesign has been positive if not a bit on the tepid side. (One has to wonder why Tom Hopper and Co. didn’t do the same thing with Cats but that’s a whole other story). With Ben Schwartz (Parks and Recreation) voicing the iconic Sonic, this story sees our favorite blue runner literally on the run from a government (led by Jim Carrey) that sees to do him in. Honestly, does the plot of a Sonic the Hedgehog movie even matter? People going to see this just want something that evokes the mood, feeling and passion behind the video game. If Sonic the Hedgehog can do that, then February could quite potentially make viewers feel like summer has come early this year.

With a cast that includes Martin Kove, William Sadler and Stephen Lang how can VFW be anything but completely great? This film clearly harkens back to such 80s classics as Class of Nuke ‘Em High and Class of 1984. When a VFW hall is threatened by a crazy drug dealer and some oddball punkers, who better to defend it than Stephen Lang, William Sadler and Fred Williamson. Factor in that George Wendt (Cheers) also makes an appearance and VFW is easily one of the coolest, retro films we are going to get in 2020. Director Joe Begos (Bliss) has a truly arresting visual style and that clearly transforms the idea behind VFW. It is both chilling, captivating, and singularly it’s own, which helps elevate this film above being simply a piece of B-movie material.

The Call of the Wild – February 21

Harrison Ford, clad in a white beard and looking every bit his 77 years of age, is matched with a lovable CGI sled dog for an amazing adventure in the wilds of Alaska. Based on Jack London’s ubiquitous novel, The Call of the Wild looks like an instant classic based solely on its trailer. With striking visuals from director Chris Sanders (How to Train Your Dragon), this movie is made even more impressive by the fact that it was done with a CGI dog. Sure, there are going to be purists that think the tale would’ve been better served had it been done with a real one. However possible that might have been, the economics of today’s film industry make it so the doing of it is impossible. Watching the trailer it’s very hard to discern that this dog isn’t real. By the end of the the movie, however, it seems apparent that real or not, this story and characters will be in the very real realm of viewer’s hearts.

The Night Clerk star Tye Sheridan first burst onto the movie scene in Mud and then really cashed in his promissory note in Ready Player One. However, the young actor’s quirky career can best be defined by choices of movies like The Night Clerk. In the film, Sheridan plays the role of Bart Bromley. He’s a hotel clerk with a penchant for over looking in on its guests. Things take a turn when there’s a murder and suddenly people start looking in his direction. With a solid cast that includes notables like Helen Hunt and John Leguizamo, this thriller appears to have a genuine “whodunit” going for it. A lot of movies are going to be released in 2020. The field will no doubt get crowded. By summertime, many of the years early releases will have been forgotten. The Night Clerk seems to be one of those films that just might stay with us for awhile.

Starring Elisabeth Moss (The Handmaid’s Tale), this 21st Century take on The Invisible Man seems, at least by what the trailer shows, to have gotten a lot right about the pulse of the world. Moss plays Cecilia, an escapee from a terrible relationship, whose husband later kills himself. She soon discovers that not only was his death a set-up, but that he is actually invisibly haunting her in a effort to make her look less than sane. This cat and mouse tale is put together with some old school effects, but everything else about this movie is very much of its time. Moss’s Cecilia doesn’t appear to be waiting around, simply dealing with the things her deranged husband is doing. She is actually one step ahead of the investigators and all the others that are trying to help her. What ultimately transpires is a story of a woman eschewing all “common sense,” and in the end seemingly proving to everyone that she was right all along. 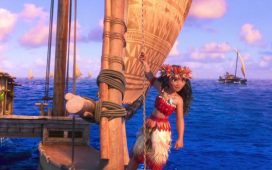