Bernie Sanders And Cardi B Discuss Racism, Police Brutality, And A Lot More In New Video 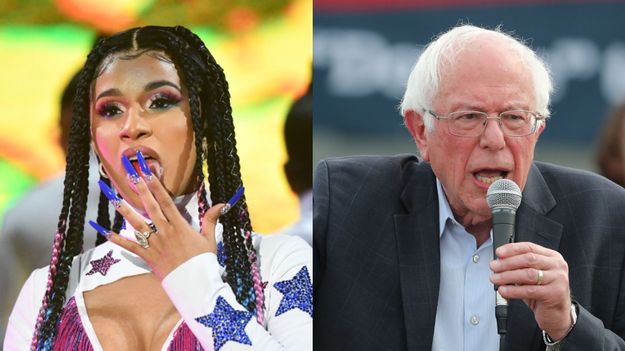 It’s finally here: the full interview between Cardi B and Bernie Sanders.

In July, Cardi revealed that she wanted to talk to Democratic presidential candidates to figure out their stances on important social issues ahead of the 2020 election, so she asked her fans on Instagram to send her questions and promised to get the most-asked queries answered. A short time later, she posted a picture showing that she had, indeed, sat down with one of the presidential hopefuls, Senator Sanders. On August 15, the Democratic presidential candidate shared the entire 12-minute discussion. This comes just one day after Cardi released a clip of the conversation that previews their breakdown of the minimum wage debate in the United States.

The two met at the Ten Nail Bar salon in Detroit and covered everything from student debt and taxes to jobs, police brutality, and more. They even talked briefly about Franklin D. Roosevelt, Cardi’s favorite president, who has also been an inspirational figure for Sanders’ presidential campaign.

The conversation began with Sanders revealing that he isn’t afraid of upsetting powerful people, noting that he’s been doing this for his entire life. From there, they move into a brief discussion about President Donald Trump.

“I feel like there’s a serious problem right now in America,” Cardi says. “We have this bully as a president. And the only way to take him out is somebody winning.”

Bernie’s response echoed her sentiment: “We’ve got to get rid of Donald Trump obviously because Donald Trump is an overt racist,” he says.

Cardi continues with how the current sociopolitical climate contributes to police brutality against Black people and minorities. “What are we going to do to change that?” she asks. “Because that is discouraging our people, it’s discouraging us to fight, it makes us feel like we’re worthless. We constantly see our men getting killed, every day.  And it seems like nobody cares. Nobody’s sympathizing, nobody’s talking about it.”

“Obviously, we need to end all forms of racism in this country from Donald Trump down to the local police department,” Sanders answered, before explaining how resources should be allocated to ensuring that more people of color get proper education and job training. “If a police officer kills somebody, that killing must be investigated by the United States Department of Justice,” he added.

Sanders also underscored the need to mobilize young people, like Cardi’s fans, in both the 2020 election as well as primaries and any and all local elections.

This conversation is the latest of Cardi B’s journey into being politically involved. She spoke with GQ in 2016 and revealed her love for politics (“I love political science. I love government. I’m obsessed with presidents. I’m obsessed to know how the system works”) and has used her Instagram account to endorse Democratic candidates as well as call out Trump on the 2018-19 federal government shutdown. In the now-deleted Instagram video, Cardi said “I feel like we need to take some action. I don’t know what type of action, because that’s not what I do, but bitch, I’m scared. This is crazy.”

Since then, Cardi has ramped up her activism, publicly showing support for Sanders and Minnesota Representative Ilhan Omar, declining to perform at the halftime show to show support for Colin Kaepernick, and, now, working to get questions answered by Democratic candidates.

The Top 10: Songs that include a speech