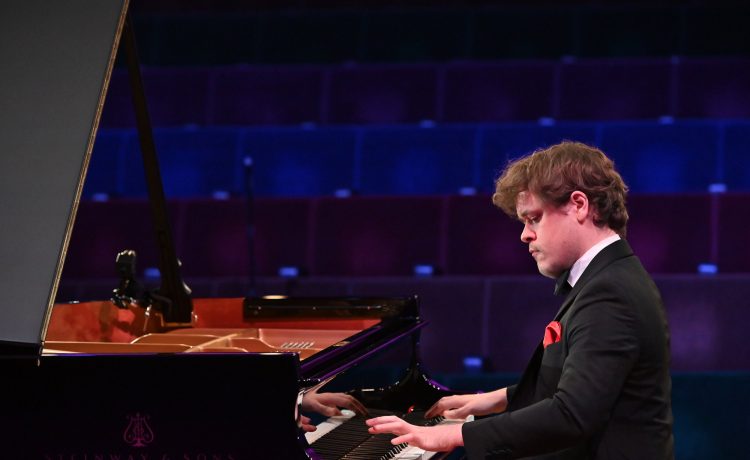 Winning the keyboard final of BBC Young Musician in 2004, aged just 11, could have set pianist Benjamin Grosvenor up for a career of big competitions and even bigger hype. Instead this scrupulously unshowy, thoughtful musician has forged a much more interesting path.

Signed to Decca in 2011 – the first British pianist to join the label for almost 60 years – he has since produced a handful of award-winning recordings of music by Liszt and Chopin that celebrates his dazzling palette of colours, big-boned sound and subtlety of gesture.

All that and more was on display in this first concert in the Barbican’s new season of closed-door events. The raised, spotlit platform, specially built in the empty stalls, screamed virtuoso showcase – entirely at odds with the quiet demeanour and introspective sense of play that Grosvenor brought to the performance.

Even in Liszt’s embellished transcription, Schubert’s “Ave Maria” is a gentle opener, its huge technical demands all dissolved into the liquid smoothness of the semiquavers that ripple and break around the lovely melody. Chopin’s “Sonata No. 3 in B minor” showed us the muscle underpinning Grosvenor’s musicality, the tender, slow movement framed by the surging chromatic scales of the Allegro transformed in the finale into a blaze of light, hot brilliance.

Ginastera’s three Argentinian Dances swapped Chopin’s liquid heat for something altogether drier. The arid textures and dusty swirls of rhythm eddied under Grosvenor’s fingers, syncopations bending and twisting time with playful precision. But these games were brief – a divertissement before we plunged back into Ravel’s watery “Ondine” and the other tableaux of his tone-poem “Gaspard de la Nuit”.

The connection back to the opening Schubert was obvious in his coolly classical approach, at its best in the trickling first movement, but maintained through the death-knell of “Le Gibet” – tragedy never overplayed.

If the shapeshifting goblin of “Scarbo” lacked the horror of some accounts, there was an impishness to Grosvenor’s performance, an airy mischief that conjured quite a different creature, a little incubus as menacing in its own light-footed way as any monster.

READ  Stormzy calls Wiley a ‘p***k’ and drags his family into nasty feud with diss track Disappointed
Share on FacebookShare on TwitterShare on PinterestShare on Reddit
newsgrooveApril 13, 2021