The duo, who share three children Sam, seven, 10-year-old daughter Seraphina and 13-year-old Violet, were all smiles despite the hectic looking morning.

Carrying his bambinos’ rucksacks in his hand, the proud dad ushered his children along down the street.

The star was wearing a grey coat and blue jumper that he’d matched with a pair of jeans.

But while he kept things casual, it seems the 47-year-old was more than happy to get his brood into the Halloween spirit, as he laughed along while his former partner Jennifer helped her little one into their costume.

Ben recently celebrated one year of sobriety after the American actress is said to have pushed him to seek help for his addiction issues.

However, just this week, the megastar sparked concern when he was seen stumbling around after the Unicef Masquerade ball, at La Peer Hotel, in West Hollywood.

Since then, the Argo actor has spoken out on the night, acknowledging that his sobriety is something he has to continuously work on.

The dad-of-three told TMZ: ‘Well you know it happens, it’s a slip but I’m not going to let it derail me.’

Ben did not answer a reporter who asked if he would be re-entering rehab.

A source told Metro.co.uk that Ben is continuing to work on his sobriety every day, following a rehab stint in August 2018 when he received treatment for alcoholism.

The insider explained: ‘He continues to contend with this disease and is doing so very publicly.

He wrote to his followers: ‘This week I completed a forty-day stay at a treatment centre for alcohol addiction and remain in outpatient care. The support I have received from my family, colleagues and fans means more to me than I can say.

‘It’s given me the strength and support to speak about my illness with others.’

He added: ‘Battling any addiction is a lifelong and difficult struggle. Because of that, one is never really in or out of treatment. It is a full-time commitment. I am fighting for myself and my family.

‘So many people have reached out on social media and spoken about their own journeys with addiction. To those people, I want to say thank you.’

The Bachelor's Ben Higgins Is Engaged to Jessica Clarke

Tom Hanks Expresses Gratitude Upon Return to the U.S. After Coronavirus Treatment in Australia 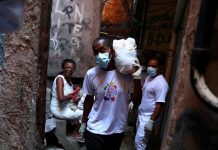