A team of scientists at the Lunares Research Station in Pila, Poland conclude a two week experiment testing how well bees might survive in a colony on the surface of Mars.

The results were not encouraging, as the team observed between 1,000 and 1,200 bees died every four days.

‘It was almost a little scary because you don’t see this in nature, but in isolation the dead bees covered the floor.’ Lunares researcher Aleksander Wasniowski said. 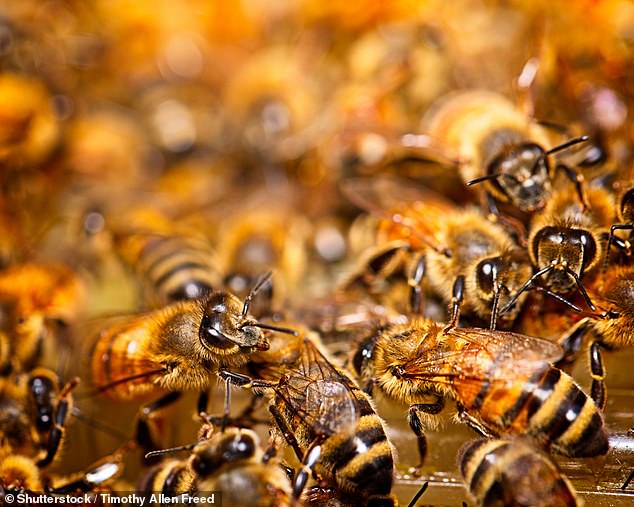 Researchers in Poland placed 90,000 honeybees in a sealed tent for two weeks to see how bees would adapt to conditions similar to what they might be like in a colony on Mars

The experiment wasn’t just meant to test how well bees could survive in space, but how well a hive could function, in part to test whether honeybees could be used in food production in a colony on Mars, either in the form of honey production or through pollinating other edible plants.

The researchers started with 90,000 honeybees placed inside sealed tents and controlled for temperature, humidity, and hive weight, according to a report from Wired.

But not only were bees dying at an accelerated rate, the confined conditions seemed to have a major impact on bee behavior.

Bees entered an ‘overwintering’ state, where they seemed to greatly reduce their activity, typically seen during winter.

They also found the bees to ignore the pots of lavender and spirulina powder that had been placed throughout the enclosed tent to test whether they would attempt pollination. 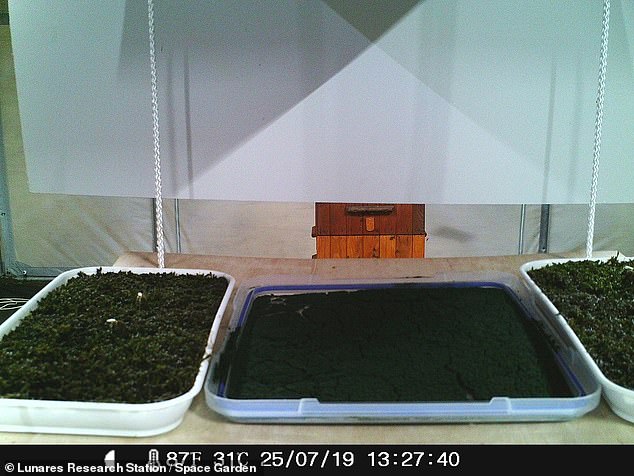 Instead, the bees mostly remained in the hive or gathered around lights placed throughout the tent.

The researchers found the hive effectively stopped reproducing, something that seemed to accelerate the rate of bee death as the temperature in the tent declined along with the number of live bees.

While bees’ generally short lifespans are offset by the queen bee, who might normally produce over a thousand new bees in a day under normal conditions.

The typical bee lifespan is between four and five months.

Researchers said they would prepare for a future experiment to see if using brighter lights in the tent and using a gradual introduction to the self-contained environment might ease the effect on the bees.

‘Food is probably going to be the hardest thing to make locally on Mars, and you can’t just import it all if you want to have a self-sufficient settlement,’ University of Florida researcher Keith Cannon said earlier this year.

Cannon led a project earlier this year that considered how a million-person colony on Mars might be supported.

They suggested using a cricket farm as the insect can be ground into a calorie-rich flour that could help feed colonists.

‘Bugs are the way to go, if people can get over the gross factor,’ Cannon said.

WHAT ARE NASA’S PLANS FOR A MANNED MISSION TO MARS IN THE 2030s?

Mars has become the next giant leap for mankind’s exploration of space.

But before humans get to the red planet, astronauts will take a series of small steps by returning to the moon for a year-long mission.

Details of a the mission in lunar orbit have been unveiled as part of a timeline of events leading to missions to Mars in the 2030s. 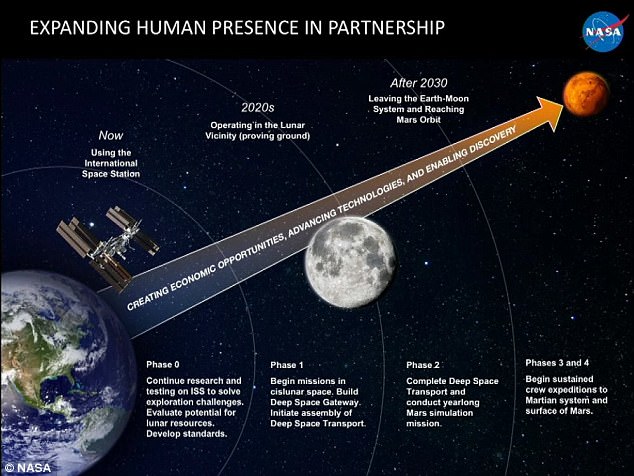 Nasa has outlined its four stage plan (pictured) which it hopes will one day allow humans to visit Mars at he Humans to Mars Summit held in Washington DC yesterday. This will entail multiple missions to the moon over coming decades

In May 2017, Greg Williams, deputy associate administrator for policy and plans at Nasa, outlined the space agency’s four stage plan that it hopes will one day allow humans to visit Mars, as well as its expected time-frame.

Phase one and two will involve multiple trips to lunar space, to allow for construction of a habitat which will provide a staging area for the journey.

The last piece of delivered hardware would be the actual Deep Space Transport vehicle that would later be used to carry a crew to Mars.

And a year-long simulation of life on Mars will be conducted in 2027.

Phase three and and four will begin after 2030 and will involve sustained crew expeditions to the Martian system and surface of Mars.