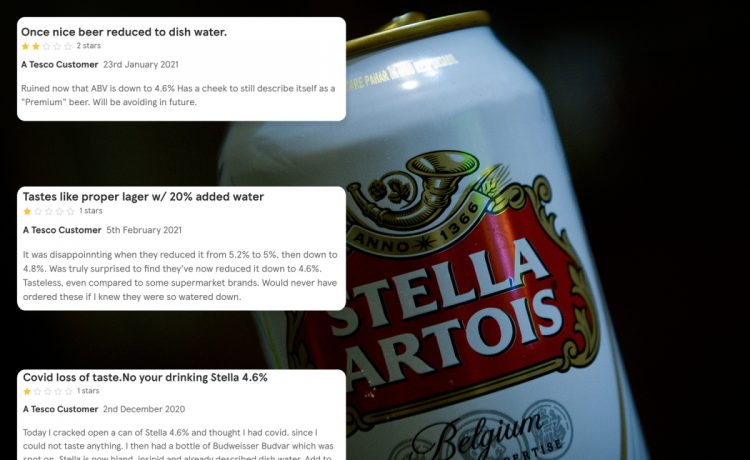 STELLA Artois has angered boozy Brits after it changed its recipe to reduce the amount of alcohol in its lagers.

The percentage of alcohol in the beer was cut slightly from 4.8% to 4.6% in September last year but boozers are complaining it now “tastes of nothing”.

Stella owners Budweiser Brewing Group UK&I lowered the alcohol content in its canned, draft and gluten-free versions as part of a “wellness trend”.

But the move has left beer lovers fuming and sparked a surge in one star reviews across supermarket websites from customers.

One person even joked they’d contracted coronavirus because they “could taste nothing” while sipping the lager. Losing your sense of taste is a key Covid-19 symptom.

In a scathing review on Tesco’s website, the person wrote: “Today I cracked open a can of Stella 4.6% and thought I had Covid, since I could not taste anything.”

They added: “Stella is now bland, insipid and already described as dishwater.”

Another wrote: “A once great beer of the geezers. Now watered down to 4.6 per cent.

“Won’t be buying this anymore, off to find another beer that is at least 5 per cent, or are the English not trusted with that anymore.”

One beer lover raged: “Ruined now that ABV is down to 4.6%. Has a cheek to still describe itself as “Premium” beer.”

“Tastes, even compared to some supermarket brands,” another reviewer fumed.

“Would never have ordered these if I knew they were so watered down.”

Stella said the recipe change was in line with its commitment to responsible drinking.

It wanted to give people greater choice in how they can moderate alcohol intake without having to sacrifice on the taste.

Dorien Nijs, brewmaster at the brewery in Leuven, Belgium, said: “We know that taste and quality remain the number one priority for Stella Artois drinkers, and we also recognise an ongoing health and wellness trend through moderation.

According to the NHS, regularly drinking more than 14 units of alcohol a week risks damaging your health.

To keep health risks from alcohol to a low level if you drink most weeks:

If you’re pregnant or think you could become pregnant, the safest approach is not to drink alcohol at all to keep risks to your baby to a minimum.

“We are proud that we can now deliver the same Stella Artois taste people know and love, with an ABV of 4.6 per cent.”

The brewery added that the drop in alcohol content has not had a negative impact on sales.

Cans and bottles of Stella Artois are sold at all major supermarkets in a variety of pack sizes.

Other premium lagers include Carling and Foster’s, which are both at 4% ABV, and Peroni at 5.1% ABV.

Remember to always drink responsibly and check out Drinkaware.

Furlough scheme and business rate relief ‘to be extended until summer’

NO JAB, NO JOB

Employers could impose ‘no jab, no job’ work contracts on new staff

There’s hope that Brits will be able to sip on a draught pint from April if pubs are given the go ahead to serve outdoors drinks.

There reports that drinkers won’t have to order a “substantial meal” either.

The Prime Minister is set to outline his road map for easing England out of the current coronavirus lockdown next Monday, February 22.