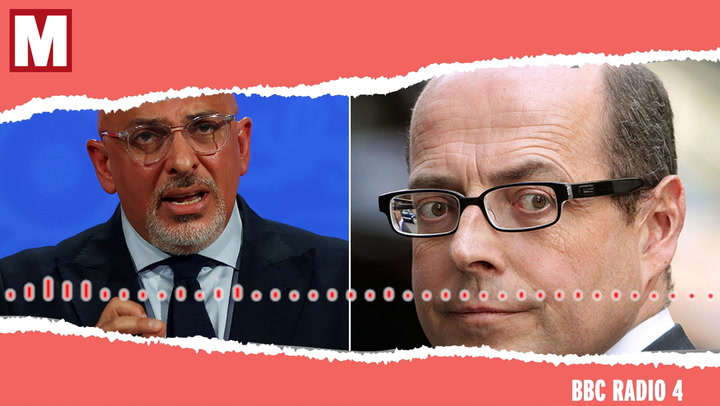 Nick Robinson threatens to cut off interview with Nadhim Zahawi

BBC presenter Nick Robinson threatened to cut an interview with Vaccines Minister Nadhim Zahawi after the top Tory repeatedly refused to say why the Government was breaking promises to voters on tax hikes.

Boris Johnson pledged at the 2019 general election that the Conservatives would not raise income tax, National Insurance or VAT.

The Prime Minister also vowed to stand by the pensions triple lock, which was a guarantee that pensions would rise in line with inflation, average wages, or 2.5%, whichever was the highest.

But ministers will this afternoon outline plans to smash both promises, by raising National Insurance by 1.25% to fund social care – something which could cost a worker on £30,000 around £250 extra per year.

Separately, Chancellor Rishi Sunak is expected to scrap the pensions triple lock this year, to prevent a statistical anomaly triggering an 8% state pension rise in April 2022.

It follows a year in which Covid has wreaked havoc with the economy and public services.

But when Zahawi appeared on BBC Radio 4’s Today Programme, he refused to defend the moves in any way, simply saying listeners must “wait for the detail” and Robinson almost lost his cool.

Here is the exchange.

Robinson: “Just to be clear, the reason you seem to be saying there is a reason to break the PM’s word on, his promise on tax, is because you need to bailout the NHS, otherwise there would be a very, very big backlog.

“Is that your explanation to voters about why you said one thing when you ran for election and now you’re doing another?”

Zahawi: “No, what I’m saying to you is let’s wait for the detail.”

Robinson: “No no. Detail is not the point. You’re here to talk about the principle. I’m asking you why you said one thing to the electorate and you’re now saying another.”

Zahawi: “You asked me the question. What I’m saying to you is let’s see the detail. I will happily come back on your programme. The Chancellor I’m sure will deal with this in his statement as will the Prime Minister.”

Robinson: “I’m not asking about the detail. We don’t want to waste your time and frankly I don’t want you to waste the listeners’ time. People are entitled to an answer on a very simple question. Why do Conservatives now believe that they have to put taxes up?

“Let me put a more specific question that your own backbenchers are asking. Why do you believe that a young worker in a care home in Middlesbrough should pay more in tax to subsidise a wealthy pensioner in Surbiton?”

Zahawi: “Again, it would be I think wrong and unwise for the Vaccine Minister to stray into the how we pay for reforming social care, which is so in real need of reform, or any other part of the healthcare system. That would be set out

Robinson: “I think frankly what we should do is cut this interview short because it’s a waste of our time and a waste of ours if you can’t address it.”