Battle of the Editors: Best Bruins in the bubble to feature on the cover of future NCAA video games – Daily Bruin 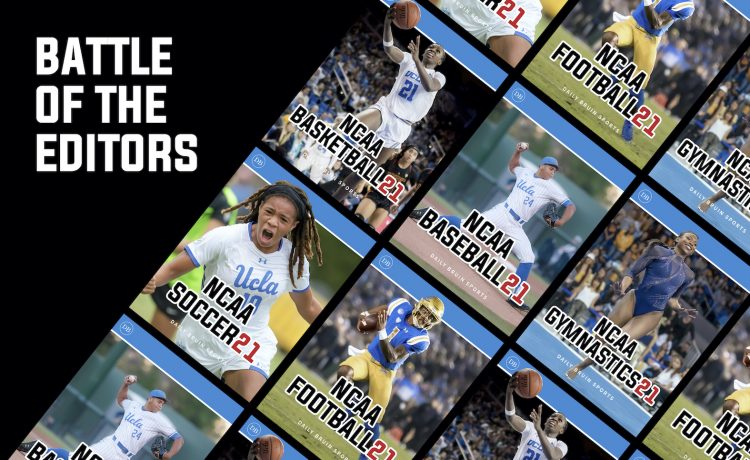 Many people who usually spend their time watching live sports have had a lot more free time on their hands amid the COVID-19 outbreak, and video games are the closest simulations to their favorite pastimes.

While sports video games are exclusively made for professional leagues at the moment, that could be changing sooner rather than later.

The NCAA will be granting student-athletes access to their name, image and likeness rights as soon as 2021, meaning EA Sports’ NCAA Football and Basketball franchises could soon make their long-awaited returns. With the return of those games – and possibly more – comes the return of iconic cover athletes, and the Daily Bruin Sports editors broke down which Bruins would best represent their sport if the games were to come out this fall.

In the past, EA Sports would pick NBA and NFL rookies as its cover athletes because current student-athletes weren’t allowed to make appearances in those games at the time. But with the new bylaws coming down the pipeline, we picked UCLA athletes who could be enrolled in school come next year.

The NCAA’s group of advisors claimed Wednesday that group licensing for video games would involve legal hurdles that will be difficult to address, but the people’s voices have been heard: They want these games back as soon as possible.

Sophomore quarterback Dorian Thompson-Robinson is not the best athlete returning to the gridiron in the fall, when it hopefully comes back. His injury and turnover problems have hindered his progress at times during his UCLA career.

However, when he is at his best, Thompson-Robinson is the definition of an electric player, which is exactly the type of athlete that deserves to be on the cover of NCAA Football.

Look at his game against Washington State in October – one of the biggest comebacks in UCLA football history. Staring down a 32-point deficit with just over 22 minutes of game clock left, the Bruins looked like they were leaving Pullman with another defeat.

Thompson-Robinson, however, dug deep, outdueling Cougar quarterback Anthony Gordon to pull out the 67-63 road win. He ended the night with 507 passing yards and five passing touchdowns to go along with 57 yards and two touchdowns on the ground, giving him the school record for total offensive yards in a game.

While he may not have the Heisman hype or NFL Draft status of Clemson quarterback Trevor Lawrence, Thompson-Robinson has the big game potential and explosiveness that could wind up on the cover of the next video game.

Just because the WNBA has to latch onto NBA 2K in order to get its own video game treatment doesn’t mean NCAA women’s basketball can’t get a game to itself.

Who better to represent the sport than one of the game’s brightest young stars?

Sabrina Ionescu and the rest of Oregon’s top stars have gone pro, which means junior forward Michaela Onyenwere could be the biggest name in the West come next season.

Onyenwere was a Third Team All-American this year, and espnW ranked her as the third-best women’s basketball player returning to school next season. Her averages of 19.1 points and 8.6 rebounds per game led UCLA in 2019-2020, and her role in coach Cori Close’s offense should continue to grow with guard Japreece Dean and her 13.5 points per game heading to the WNBA.

What also helps Onyenwere’s marketability is the fact that she’s the go-to star player on one of the nation’s new top teams in UCLA. Historic powerhouses UConn, Notre Dame and Baylor don’t have any All-Americans returning to school, meaning EA Sports could look toward Westwood for their first-ever women’s basketball cover athlete.

Add in the fact that Onyenwere was pining for a spot on Team USA for 3×3 competition at the Tokyo 2020 Olympics, and she seems like the perfect well-rounded player to sell units and best represent her sport next season.

Playing video games is supposed to be fun – a chance to be the best athlete in the game and celebrate that fact every chance you get.

No one represents the joy of playing soccer more than Mia Fishel.

The UCLA women’s soccer forward entered her freshman season with a bang, scoring either a goal or logging an assist in each of her first three games.

But what stands out most about Fishel’s first-ever collegiate goal – a half volley that spun into the left side netting – was the ensuing jubilation written all over her face as she screamed with excitement, flexed her arms and leaped for her teammates.

Every beat photographer started paying a little extra attention to Fishel after that day, waiting to capture another moment like that. And they got what they hoped for.

By the end of the season, Fishel tallied a team-high 14 goals – scoring on 20% of the shots she took and making her the third-top freshman in scoring in the nation behind two players who each scored 15 goals.

Fishel has also proven herself to be one of the fastest players in the country and has the footwork to back it up, giving her an ideal skill set for a video game character in addition to undoubtedly the best celebration selection.

Though she has already built a name for herself as a member of the U.S. Women’s National Team youth system, scoring 13 goals in the 2020 CONCACAF U-20 qualifiers – an all-time record – Fishel still has three more years of collegiate eligibility to be the face of NCAA women’s soccer.

And her face, filled with intensity and passion, is bound to get anyone excited about the game.

It’s about time a pitcher was the cover athlete for a baseball game.

Since the inception of Sony’s MLB The Show franchise in 1998 – largely the only baseball simulation game for the major and minor leagues – a pitcher has never been featured as the cover athlete on the U.S. release of the game.

MLB The Show’s cover has been graced by the likes of the Philadelphia Phillies’ Bryce Harper, the Detroit Tigers’ Miguel Cabrera and the Boston Red Sox’s David Ortiz. But never a top arm.

So if there ever is an NCAA baseball video game, it’s only fair that the inaugural installment of the franchise should correct this wrong and feature one of the best hurlers in college baseball.

As UCLA baseball’s Friday night starter in 2020, junior right-hander Zach Pettway tallied a team-best 1.05 ERA among starters, winning three out of his four starts before the Bruins’ season was cut short.

Along the way, Pettway logged 29 strikeouts, fanning 13 batters in one night against Saint Mary’s on Feb. 21. His success on the mound earned him the top spot in D1 Baseball’s junior pitcher rankings, indicating Pettway is one of the top arms on the collegiate stage.

Most impressive, however, has been Pettway’s bounce back from injury in 2019. Missing both the month of May and June in 2019 because of a forearm strain, Pettway’s ability to recover and continue his dominance as the Bruins’ ace has drawn praise from both coach John Savage and his teammates.

A true comeback kid, with one of the strongest performances throughout the shortened 2020 season, Pettway deserves more than anyone to be the face of college baseball in homes across the country.

And for Nia Dennis, that move actually involves signing her name in the air.

Just like her former teammate Katelyn Ohashi in 2018 and 2019, the UCLA gymnastics junior has become one of the most recognizable gymnasts of the 2020 season after her Beyoncé-inspired floor routine went viral in February.

With other high-profile gymnasts such as UCLA senior Kyla Ross and Oklahoma’s Maggie Nichols finishing their final collegiate seasons, Dennis is poised to be the most recognizable face returning to college gymnastics next year, making her a perfect candidate to be the first gymnastics cover athlete.

In addition to her internet-shattering floor routine, which garnered a 9.975 from the judges, Dennis collected five other floor scores above a 9.900 in 2020. As a reoccurring presence as the leadoff competitor in the vault lineup as well, the junior’s consistency resulted in an average score of 9.863 over the course of the season.

Unlike other gymnasts who specialize in just one or two events, Dennis has recent experience excelling on all four events. In the last two years alone, Dennis has regularly competed in all four rotations and has scored a 9.950 or higher on each of them.