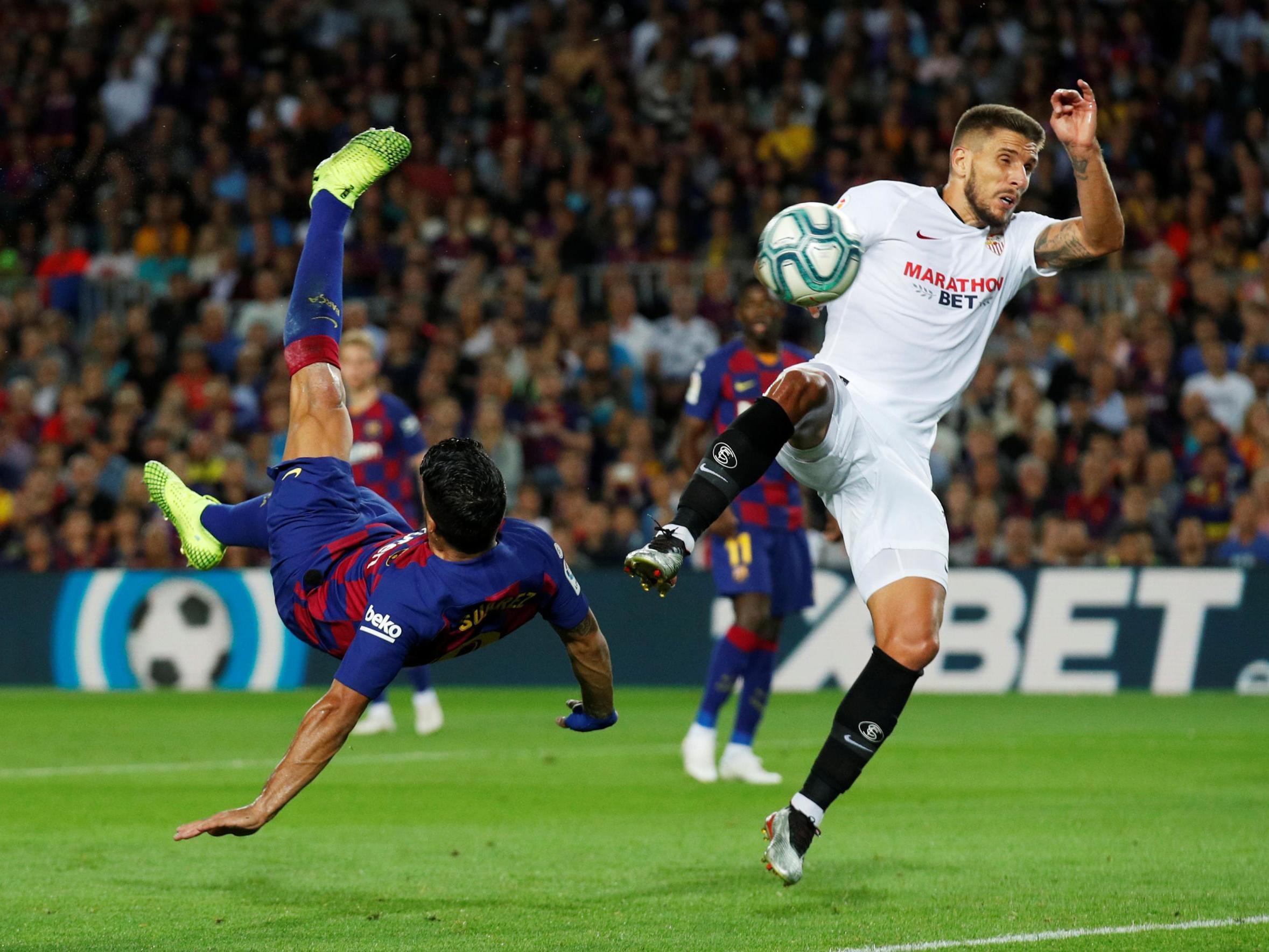 Barcelona vs Sevilla result: Luiz Suarez scores spectacular goal as Ernesto Valverde’s side move up to second in La Liga | The Independent


As it happened Ended

Luis Suarez scored a spectacular overhead kick to inspire nine-man Barcelona to a 4-0 La Liga victory over Sevilla at the Nou Camp.

Suarez opened the scoring in acrobatic fashion in the 27th minute and goals from Arturo Vidal, Ousmane Dembele and Lionel Messi – his first of the season from a trademark free-kick – sealed a comfortable victory.

The win was Barca’s fourth in a row in all competitions since a shock 2-0 loss at Granada on September 21 and lifts Ernesto Valverde‘s side to second place in LaLiga, two points behind leaders Real Madrid.

However, the win was marred by the late dismissals of Dembele and Ronald Araujo, the former receiving a second yellow card for dissent after last man Araujo had been sent off for hauling down Javier Hernandez. Relive all the action below:


Welcome to The Independent‘s live coverage as Antonio Conte’s Inter Milan welcomes his former club Juventus to the San Siro.

In Spain, Barcelona host Sevilla at the Camp Nou as Ernesto Valverde’s side look to recover a stuttering start to the season and make up ground on Real Madrid.


It’s Antonio Conte vs Maurizio Sarri in the battle of the former Chelsea managers this evening. Both Inter and Juventus have made excellent starts to the season, the former sitting two points clear at the top with six wins from six.

This has all the ingredients required for a classic. Inter look capable of challenging the hegemony of Juventus, who have won the last eight Serie A titles. And it will be an intriguing tactical battle between Conte and Sarri.


It has been an inauspicious start to the season for Barcelona. Ernesto Valverde is under increasing pressure from fans, particularly following a 2-0 defeat at Granada a couple of weeks ago.

Since then, though, there has been a response. Barcelona have won their last three games in all competitions, beating Inter in the Champions League last time out. They will be tested today by a Sevilla side level on points with them.

Barcelona know the importance of a win here. They are five points behind leaders Real Madrid after Los Blancos won 4-2 against Granada on Saturday.


Here’s a long read from Miguel Delaney on two of the clubs in action tonight:


Aaron Ramsey only makes the bench for Juventus tonight. There is a return to the starting XI, though, for Paulo Dybala, who comes into the team for Gonzalo Higuain.

Inter, meanwhile, start with Romelu Lukaku up front, although Alexis Sanchez is absent having been sent off against Sampdoria last weekend.

Barcelona start with a front three of Ousmane Dembele, Lionel Messi and Luis Suarez, with Antoine Griezmann dropping to the bench.

The teams are out at San Siro! Almost time to get underway.


We’re underway! Can Inter extend their lead over Juve to five points? Or will the visitors return to the top?

After some early defending, Inter break forward for the first time through D’Ambrosio, who links up with Barella and wins his side a corner.

The perfect start for Juventus! They lead inside four minutes. Dybala is picked out by Pjanic and makes his way into the box, firing off a shot that catches out Handanovic and flies into the far corner.

Ronaldo is almost set away on the left, finding space in the box. But he’s closed down and can’t get his shot off.

Off the bar! Ronaldo cuts inside from the left and unleashes a powerful shot which cannons back off the woodwork.

At the other end, Lukaku is played in behind the Juventus defence but is closed off before he can fire at goal.

Alex Sandro goes into the book for preventing a quick throw-in.


They’re underway at the Nou Camp too!

Inter have yet to really get going and look to be a little rattled by Juventus’ quick start. They force a corner, though, which comes out to Barella, who sends a volley wide.

Penalty for Inter! De Ligt, in an attempt to head away a cross, has his arms raised and clearly handballs. The referee points to the spot…

Want to bookmark your favourite articles and stories to read or reference later? Try Independent Premium free for 1 month to access this feature.