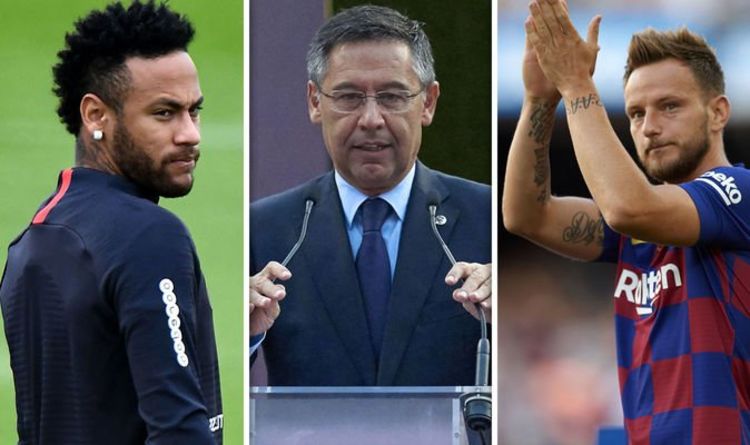 Barcelona legend Rivaldo has made a heartfelt plea to Barcelona white-collars to bring Neymar back to Camp Nou.

“We know everything that happened to @neymarjr,” the former striker said of his countryman on Instagram. “His departure from @fcbarcelona was wrong never he should have left one of the biggest clubs in the world.

“But he is eager to come back and assume what he did. May the president of @fcbarcelona and all of the board don’t let @neymarjr go to another club.

“I hope it gets resolves with @psg and he can get back to where he should never have left. Visca Barca.”

The Portuguese international was heavily linked with Manchester United over the summer – but Ed Woodward and Co decided against launching an offer for the midfielder.

But with the European transfer window closing next Monday – Mundo Deportivo claim Real Madrid could make an approach for Fernandes.

Neymar has absolutely no interest in joining Real Madrid.

That’s according to Mundo Deportivo journalist Francesc Aguilar, who claims Neymar has told PSG officials that he will only listen to offers from Barcelona.

Barcelona chiefs flew to Paris today for a second round of negotiations with the French champions and Aguilar claims the two parties have reached an agreement.

It’s said the Catalan side will pay two instalments of £72million for the 27-year-old forward and PSG will spend the money on Juventus’ Paulo Dybala.

Aguilar tweeted: “The source that confirms to me that the agreement between Barca and PSG for the 160million (£144m) in two instalments by Neymar, also tells me that the Brazilian has squeezed very much so that they would only hear an offer from Barca, making it clear that he did not want to continue in Paris, or go to Real Madrid”.

Dutch outlet FOK, the Catalans have beaten a host of top European clubs.

Celtic were keen on signing the star as they look to rebuild their defensive line.

The 17-year-old has made a real name for himself with his club side KVV Maastricht in the Dutch second tier.

Guillem Balague has confirmed that Barcelona are preparing to make their final offer for Neymar in today’s transfer meeting with PSG.

He tweeted: “Neymar entourage are optimistic about the possibility of signing for Barcelona.

“Clubs meeting in Paris at this time but nothing agreed yet.”

Failure to convince PSG today, would most likely spell the end of their hopes of a deal.

According to Sport, Juventus have launched yet another offer for Ivan Rakitic.

Yet now the midfielder is reportedly resigned to leaving the club and accepts it could be the right time for a new challenge.

Emre Can continues to be linked with a move away from Turin and could head to Barca.

Rakitic could be the latest member of the Barca old guard to move onto pastures new, as Ernesto Valverde continues to show faith in their new blood.

La Liga president Javier Tebas has claimed Neymar would be welcome back in La Liga, but says Lionel Messi is more important to the league’s success.

“Yes, of course [I’d like Neymar to return],” Tebas said.

“With his qualities he’s in the top three players in the world.

“It would be very important for La Liga if he came again, although it wouldn’t be defining for the Spanish league.

“The defining thing is that we play 10 months a year, with 20 clubs each playing each other and generating passion and joy each weekend for fans in Spain and across the world.

“A player like Neymar gives you a following in countries that look out for him, but he’s not an essential element, not even Cristiano Ronaldo was.

“Lionel Messi, on the other hand, is an essential element because he’s the heritage of La Liga.”

Barcelona in Paris for Neymar talks

According to Sport, Barcelona have sent delegates to Paris to try and work on a deal for Neymar.

The meeting today is described as make-or-break and failure to make any kind of advances may spell the end of their hopes of signing him before next Monday.

READ  What TV channel is the Europa League final on and how to watch Arsenal vs Chelsea for free?

They will look to pressure PSG into opening negotiations.

Barcelona transfer news LIVE: Eric Abidal is in Paris to work on a deal for Neymar (Image: GETTY)

Juventus are keen on brining Ivan Rakitic, according to Tuttosport.

They say that the Italians are willing to swap Emre Can in order to sign the Croatian.

Can looks surplus to requirements under Maurizio Sarri and has been told his game time will be limited.

Barcelona transfer news LIVE: Emre Can has been offered as part of a swap deal for Rakitic (Image: GETTY)

Neymar backed to stay at PSG

“Early indications are that both Edinson Cavani and Kylian Mbappe will be back by the second or third week of September,” he told ESPN.

“I don’t think that necessarily ways into the equation here.

“There are reports in Spain saying that Barcelona are going to make one final attempt involving an Ousmane Dembele plus cash package.

“It’s something we’ve heard but I’m pretty sceptical here. If PSG didn’t go for Philippe Coutinho plus cash, arguably a player they needed more, I’m not sure how Dembele plus cash is going to sway them.

“Also, I think in general, the mood has changed even though nobody is getting carried away by that 5-2 win over Real Betis.

“They have solutions, that Griezmann carried the team without Luis Suarez and Lionel Messi.

“On the PSG end, as much as the ultras would like to see him gone, as much as they don’t appreciate his behaviour, Thomas Tuchel will happily take him back and the club won’t be bullied into letting him go for less than he’s worth.

“Barring some weird divine intervention, I think Neymar stays where he is.”

Barcelona president Josep Maria Bartomeu has called a meeting with senior members of the board to discuss how they can fund a move for Neymar.

They are said to be preparing a final assault to persuade Paris Saint-Germain to let Neymar go before September 2 after already having two loan moves rejected.

Barcelona’s biggest problem remains how they package a deal together financially that PSG are happy with.

Ansu Fati became the second-youngster player to ever play for Barcelona in the 5-2 victory over Real Betis.

Now his father Bori Fati has claimed his son turned down the chance to play for Real Madrid.

“I had an offer from Madrid for a lot of money, but Albert Puig came and told me that they were Barca and that they had a project,” he told RAC1.

“That in a few years I would see him there. We know he works but we couldn’t imagine that he would be playing with these beasts. Training with [Gerard] Pique.”

Ernesto Valverde is now believe to be willing to let Ivan Rakitic leave the club.

The Croatian has been a real hit since arriving at the Nou Camp from Sevilla.

But now according to AS, the Spanish boss has decided he is happy to let the midfielder go providing a suitable offer arrives.

Juventus are reportedly one of the clubs monitoring the situation. Rakitic has two years remaining on his Barcelona contract.

Paris Saint-Germain are thought to be open to negotiations with Real Madrid over Neymar and there is one player they want included should they agree to let the Brazilian go.

According to Spanish outlet AS, the Ligue 1 champions have told Los Blancos they want Vinicius Junior included as part of a deal.

The report claims that PSG sporting director Leonardo is desperate to land the 19-year-old and has made several moves for him in the past.

PSG do not want Vinicius on loan, it must be a permanent transfer.

If Real Madrid are willing to give this the green light, it spells danger to Barcelona’s hopes of bringing Neymar back to Catalonia.

Paul Pogba would be a perfect fit for Real Madrid.

That’s according to the Manchester United midfielder’s brother Mathias, who thinks a mega-money deal could still happen.

Zinedine Zidane is desperate to bring Pogba to the Bernabeu, but United boss Ole Gunnar Solskjaer has emphatically denied Pogba will leave this summer.

“Everyone knows my brother would be great for Real Madrid and Zidane,” Mathias Pogba told Spanish publication AS. “It’s Real Madrid and Manchester United who need to talk.

“Zidane has always spoken highly of my brother, it’s an honour. Another thing is that they listen to him.”