Actress Sarah Parish has finally arrived back in the UK after breaking a rib and fracturing her spine while on holiday in Turkey.

The star revealed she had landed in hospital after suffering a ‘nasty fall’ on a hard surface which evidently did some damage.

Sharing an update with her followers on social media on Wednesday, the 53-year-old shared a photo from a jet, revealing she had landed back in the UK thanks to her husband.

Giving a shout out to partner James Murray for organising her trip back, she looked relieved, to say the least.

Sarah wrote on the image of her lying down in a plane: ‘I’m home! Thank you @thejimmurray for getting me here and sorting everything out. #hero.’

The actress had previously been enjoying a family trip in Turkey for the half-term holiday, sharing photos of the family wake-boarding, wake-surfing and scuba diving. 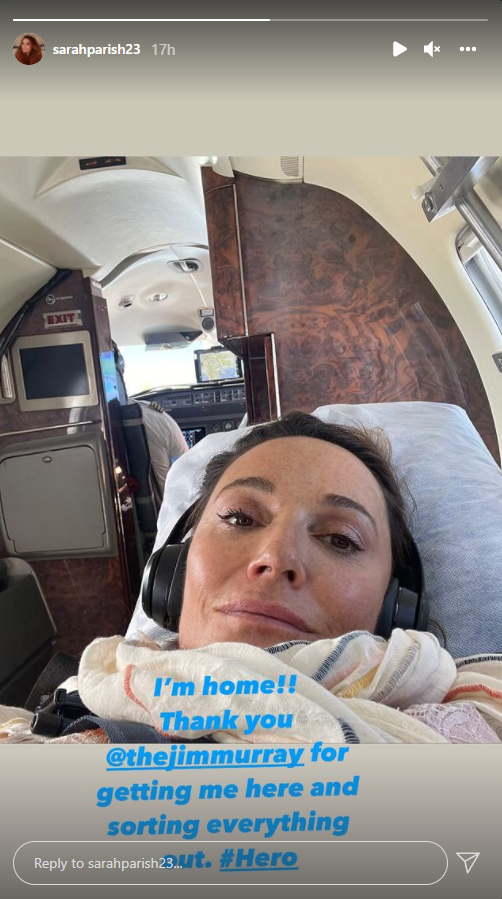 However, the trip took a turn when she later shared a selfie of herself in a hospital bed announcing the news of the accident.

‘Let’s pop in to the equation a nasty fall on a very hard surface resulting in a fractured spine. Yes, that’s better.

‘Spending a couple of extra days in Turkey but not at the lovely @hillsidebeachclub. At the local Turkish hospital. FFS.

‘Life really does appear to be taking a massive dump on my head right now.’

Actor Sebastian de Souza commented on the post: ‘My dearest Sarah I am so sorry you poor thing. I hope you are not in too much pain and that you are able to get out and back to Nellie and Jim as soon as poss. Love you so much and sending you – my hero – all the positive vibes and strength in the world!’

The actress is known for playing Detective Superintendent Elizabeth Bancroft in the ITV series Bancroft and previously starred in the crime drama Broadchurch, BBC Two comedy W1A and sitcom Trollied.