Avengers Infinity War was quite the bloodbath, with a whole host of superheroes literally biting the dust at Thanos’ hand. However, one of the snapped was almost an Avengers Endgame survivor. Speaking with Cinema Blend, screenwriter Christopher Markus admitted that Scarlet Witch nearly made the cut. And it turns out, Elizabeth Olsen’s Wanda could have been seen grieving over Vision’s corpse.

Fans will remember Loki was strangled to death by Thanos in that moment, while his alternate 2012 self featured in Avengers Endgame, before escaping with the Tesseract.

And in 2021, what happened next to Tom Hiddleston’s character will be revealed in his very own Disney Plus show – but what if that sees him replace the main timeline’s Loki for the death scene?

Reddit user ak2sup writes: “Loki’s line ‘[The] sun will shine on us again’ from Infinity War meant more than we think.

“[The] Loki we saw in Infinity War wasn’t main Loki but 2012 Loki who escaped with [the] Tesseract during [Avengers] Endgame.

“After he escaped with [the] Tesseract, whatever he does will be shown in his upcoming Disney Plus TV series.”

They added: “[At] the end of that series Loki somehow [found out] about [the] main timeline and travel[led] to this universe using [the] Tesseract.

“He then replaced himself with main Loki on [the] Asgardian ship allowing main Loki to escape.”

“That’s why he came out again after disappearing during [the] Hulk-Thanos fight, to save Thor.

“Him stabbing Thanos with a dagger was not a smart move because he was from an alternate timeline where he had not much experience and knowledge about Thanos.”

READ  Sylvester Stallone talks us through the evolution of Rambo

Loki streams of Disney Plus in Spring 2021. 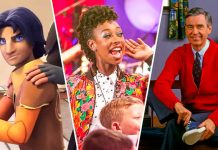 The best children's TV on streaming that parents will enjoy too

Star Wars: The Mandalorian a Big Hit for Disney Plus in Europe Despite Slow Rollout