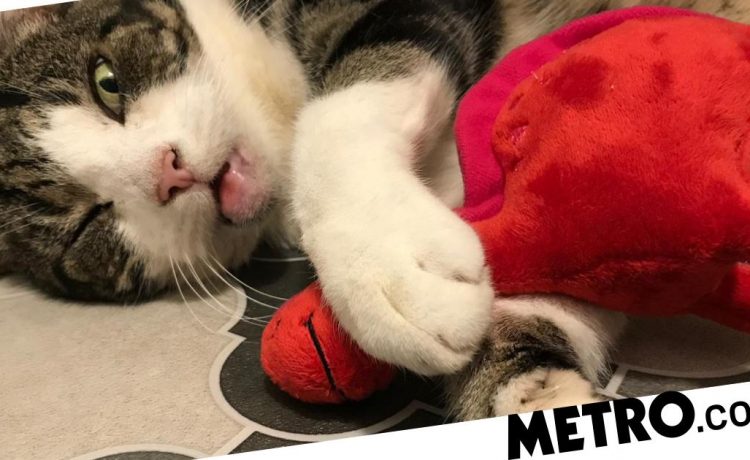 Meet Lolly, a highly relatable cat who loves attention so much she keeps faking her own death.

The moggy has developed a habit of lying down in the road with her eyes shut and her tongue hanging out, to make her owner’s neighbours think she’s dead.

Mum-of-two Lesley Southam, 47, says Lolly is just trying to get attention – and has had to send out a flyer to residents in their street in Banbury, Oxon, to explain that their cat isn’t actually dead.

Owner Lesley says: ‘He just loves attention and people. He can lay so still people will stop to check he is alive.

‘He’s literally famous at this end of town. Everybody knows Lolly.’

The flyer, which has been posted around the neighbourhood, has a photo of Lolly and the message: ‘Hi, my name is Lolly. My favourite thing is people and pretending I am dead at the side of the road.

‘I am also quite old and ignorant.

‘Please don’t worry about me. All the local businesses and vets know my owners. If you’re really worried call my mum.

‘I have also been known to get into vehicles.’

Playing dead isn’t the only trick Lolly, 14, likes to pull.

The cat also likes to sneak into strangers’ cars and make himself at home in offices.

‘Local school children on the way to school sing him songs and give him cuddles,’ Lesley adds.

‘He is known to catch a lift in pharmaceuticals vehicles if they are not watching and spent two days in the offices of the Finnes Centre being treated like a king.’

MORE: Cat who was so overweight he couldn’t clean himself gets rescued by RSPCA

MORE: You can now move to Barbados for a year and work remotely