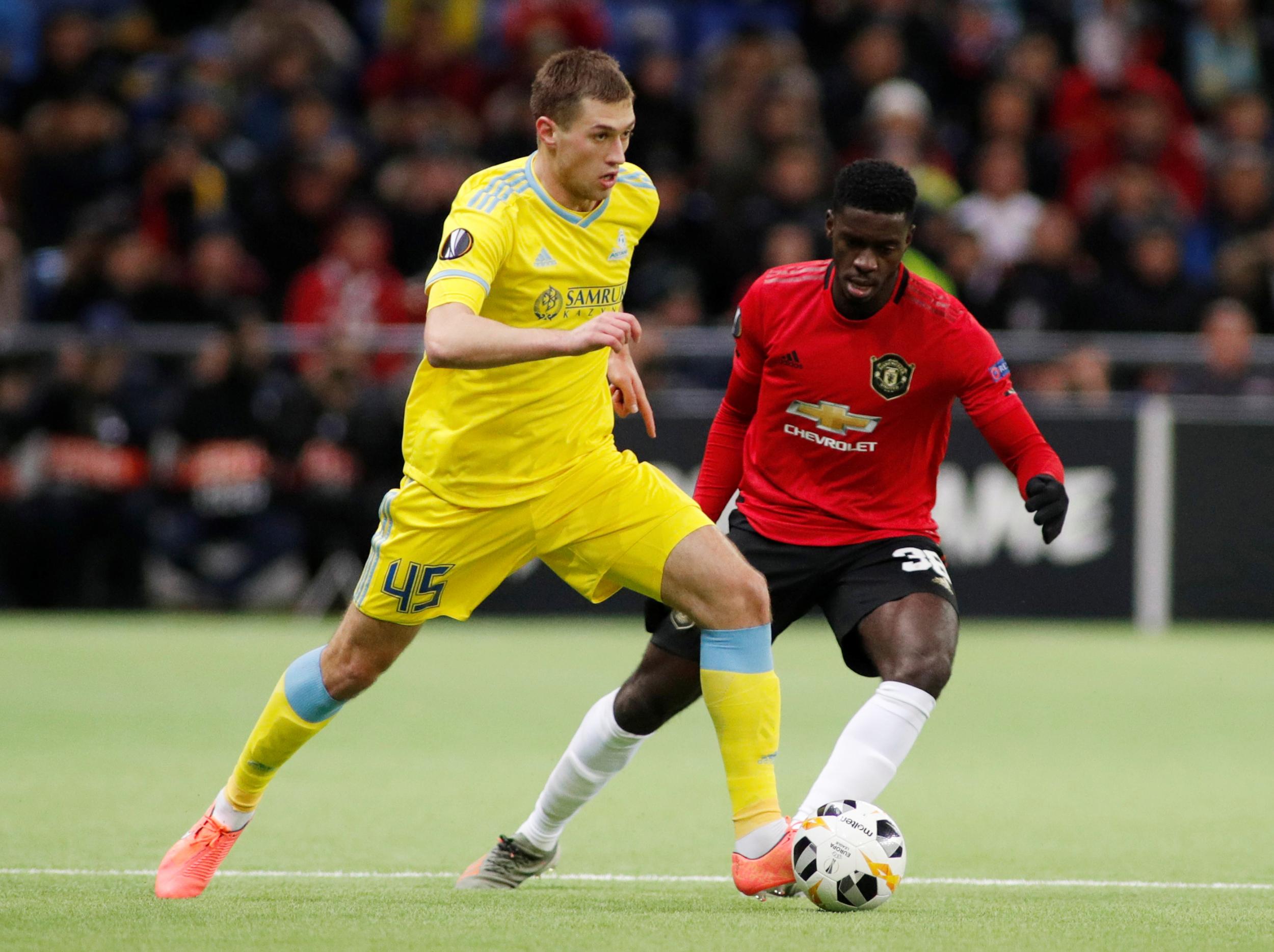 Follow live as Manchester United take on Astana in the Europa League.

With qualification for the knockout stages already secured, Ole Gunnar Solskjaer has only taken four senior players to Kazakhstan for the fixture, with a host of academy graduates hoping to seize their chance to shine.

Ethan Laird, Dishon Bernard and Dylan Levitt are all making their full debuts for the club, while Jesse Lingard captains the side in -15° temperatures at the Astana Arena. Follow all the action live below:

51 mins: Man Utd ease the pressure on themselves by taking control of the ball. Astana once again fail to pressure the ball. United are content to maintain possession for now.

48 mins: Astana have started the second half strongly. Luke Shaw gives the ball away and is unable to get it back. The home side puts the ball into the box again and a sliding Bernard kicks the ball over the goal for another corner.

Second half: Astana restart the match with a string of passes down to the goalkeeper. The ball is then played down the left wing and run into the box. Bernard puts the ball out for an Astana corner.

Here’s Jesse Lingard’s opening goal, the only one in the first half:

45+1 mins: One added minute was played to end the first half. Man Utd’s youngest ever team in Europe have the lead at the break courtesy of a Jesse Lingard goal.

42 mins: The real thing lacking from the game so far is a bit of intensity. It all seems too easy for Man Utd, Astana are pressuring them on the ball, they’re able to dictate the pace and tempo of the match.

Garner sends a ball over the top and Greenwood is caught offside.

39 mins: Jesse Lingard wins the ball in midfield and gets it to Greenwood as he’s taken out by Sigurjonsson. Greenwood is alone as he runs the ball to the box. The centre backs close in on him but he manages to get a shot away.

36 mins: The ball is played down the right for Astana and sent into the box past the far post. Laird is out of position as Beysebekov collects the ball but does well to narrow the gap at goal as the shot is taken. Grant watches the ball all the way and ends up making an easy save.

33 mins: Gomes whips the corner into the box and it comes into Garner who heads it wide of goal.

30 mins: Astana threaten the Man Utd goal again with Mutazayev eyeing up a shot from the edge of the box. The ball drops to him but Chong nips in from the left and wins the ball.

United break sharply and Lingard wins a corner with a deflected shot.

27 mins: Astana maintain possession for a few minutes ans string some passes together showing more energy in their play. Logvinenko receives the ball and has a shy at goal but sends it over the bar.

24 mins: Man Utd win a free kick about 30-yards from goal in a central position. Lingard and Greenwood are over the ball but it’s Greenwood who takes the shot. He sends it low and hits the wall.

21 mins: Rukavina wins a throw in down the right wing for Astana. They haven’t been very forceful but they get a chance on goal.

Beysebekov plays a ball into the box. Luke Shaw lets it run and Rotariv comes in behind him and shoots… but puts it wide of goal.

18 mins: Laird gets forward on the right for United and puts the ball in the box. Astana pick it up and break quickly with Rotariv but Tuanzebe takes the ball off him and United regain control.

15 mins: Astana test Lee Grant for the first time as a free kick is whipped into the box. He comes flying out of goal and claims the ball confidently.

12 mins: Man Utd have started the game very well. They’ve controlled possession and the youngsters have looked hungry to score. Lingard in particular has been a commanding presence in attack and he has his reward.

10 mins: GOAL! Jesse Lingard ends a 28 game run without scoring with a quality strike into the far corner.

Luke Shaw, on the overlap, slots the ball back into the box for Lingard. It bobbles ashe takes his first touch but he hits the shot with the outside of his right foot and beats Eric to give United the lead.

9 mins: Luke Shaw feeds a through ball up the pitch as Greenwood makes a run in behind. He collects the ball and is one-on-one with the goalkeeper when the whistle blows and the offside flag is raised.

6 mins: Man Utd have a lot of possession early on. Lingard finds a pass into the box for Mason Greenwood who hits it first time and forces Eric into the save. The ball comes out ot Lingard who wins a corner.

3 mins: Tuanzebe chases a ball over the top and concedes a corner to Astana. United defend it well and are able to counter with Greenwood and Chong. Chong holds up the ball as Astana get back in numbers before Garner is fouled in the middle of the park as the ball comes to him.

The match will be shown live on BT Sport 2, with coverage beginning at 3.30pm.

BT Sport customers can watch the match via the BT Sport app or on the online player.

A young Manchester United side may find it tough going against Astana, who are a better side than their Europa League record suggests. 1-1 is our prediction.​