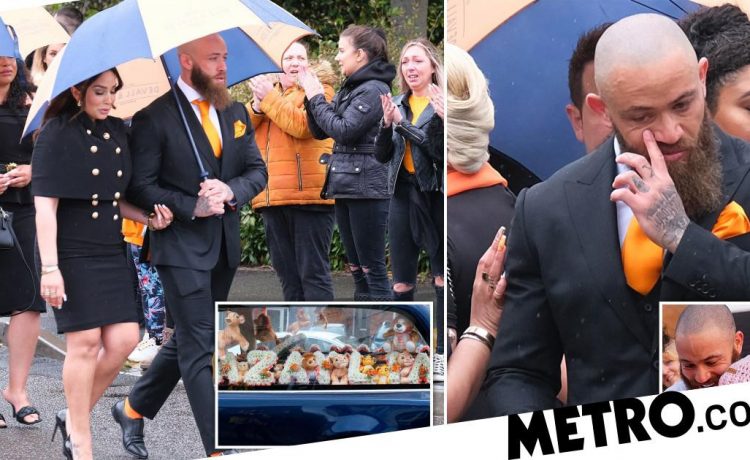 An emotional Ashley Cain and partner Safiyya Vorajee were supported by crowds of mourners who turned out to bid farewell to baby Azaylia.

Azaylia was eight months old when she died in April following a battle with a rare and aggressive form of leukaemia, having captured the hearts of the world who kept the little one in their thoughts during her struggle.

Today many turned out to pay their respects as the baby’s cortege drove through the streets of Nuneaton town on Friday morning to a private service of celebration of Azaylia’s life.

Dressed in a suit with an orange tie and pocket square in tribute to his daughter, Ashley and Safiyya kept close as they walked with the cortage supported by close friends and family.

Azaylia’s casket was adorned with her initials ADC – for Azaylia Diamond Cain – as well as orange flowers, as horses with orange headdresses pulled a white carriage carrying her.

Ashley had previously asked people who would like to line the streets along the route to show their love by clapping and making joyous noise of celebration as the cortege goes by.

Ashley invited supporters to celebrate ‘Azaylia Day’ and, in line with police guidance, shared the route of the cortage.

He wrote: ‘We would like to thank everyone for their prayers, words of sympathy & patience over the last few weeks, while we come to terms with the loss of Azaylia.

‘We have been incredibly moved by the support we have received far and wide and all the beautiful gesture of kindness will live in hearts forever.

‘We have been in correspondence with Warwickshire Police, to understand how we can give people who would like to pay their respects, the chance to do so.’

Ashley – who recently revealed a tattoo tribute to his daughter – added that a private service will be held for family only, however beforehand Azaylia will be given ‘her last journey though Nuneaton town’.

The cortage today made its way down Croft Road and Roanne Ring Way before turning right into Coton Road and left into Avenue Road. 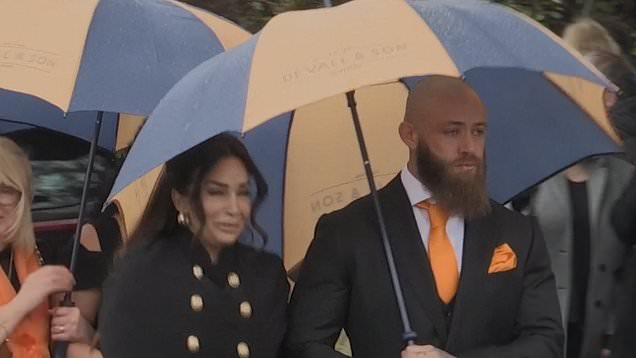 Ashley continued: ‘As truly difficult as the day will be, we are going to give it our all to keep Azaylia’s day an uplifting day of remembrance for her life and encourage anyone attending to show their love by clapping and making joyous noise of celebration as the cortege goes by!

‘We would love to make her final journey a special one as she watches from heaven. LETS GO CHAMP!’

Ahead of the funeral, Ashley’s partner Safiyya showed off her manicure which she had done specifically in order to pay tribute to her daughter.

She took to her Instagram Stories as she showcased the square-shaped design, which featured an ombre look on her thumb, pinky and index finger, with orange-coloured jewels attached near the cuticle.

Her middle finger featured an image of Azaylia, while her ring finger had a picture of The Lion King’s Simba, with clouds also included on both nails.

As the Mariah Carey and Whitney Houston song When You Believe played in the background, Safiyya wrote alongside the clip: ‘My tribute nails to look at you all day.

‘My heart is aching so hard I’m so nervous for today but I promise I will do you proud baby.’

She added: ‘My guardian angel. My daughter Azaylia diamond cain Mummy holds you on my heart forever. [sic]’

Azaylia was supported by fans from around the world who rallied behind the baby as she underwent treatment for leukaemia, with Dwayne Johnson sharing his love for the Cains in a video.

Donations to the fundraising page in Azaylia’s name has passed £1.6million and the couple plan to use some of the money to set up a charity in their daughter’s name.