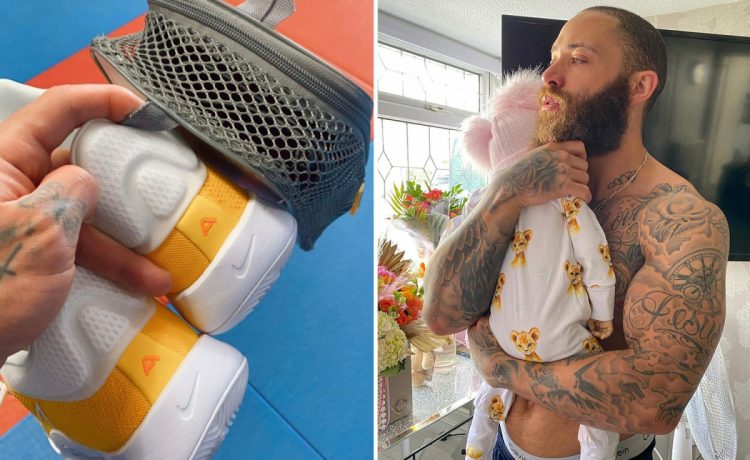 ASHLEY Cain has revealed his branded trainers in memory of his late daughter Azaylia.

The 30-year-old reality star was left devastated following the death of his eight-month-old daughter last month.

Since then, Ashley has used his daughter’s memory as a way to keep motivated.

He has taken up running and completed 34 miles earlier this week.

Sharing the news with his followers, he wrote: “From nothing for months to 55km in the last 6 days.

“Trying to keep my head strong and my heart stronger. Forever in my heart champion!”

Ahead of the session, the heartbroken dad shared a shot of his trainers personalised with the letter ‘A’.

Ashley held up his shoes for the post, which he captioned with his daughter’s initial, an angel emoji and a red heart.

Last week, the star admitted that he was turning to running in his grief, buying a pair of orange trainers to represent Azaylia and her battle.

He wrote on Instagram: “Right now, It’s taking everything I have to begin each new day. The pain of not being able to see my little girl is consuming my whole body.

“So this afternoon, I put on my new running trainers that I bought after Azaylia gained her angle wings. I got them in orange to represent Azaylia and her battle, in the hope they would inspire me to get out and work through the pain.”

Ashley continued: “For days I’ve wondered when I would have the strength to put them on and hit the road. The truth is, I don’t feel strong, I feel far from it. But in times of weakness, I have come to think… ‘What would Azaylia do?’

“She would be strong, she would be courageous and she would get up, get out, and do what is needed to be done.”

GREASE IS THE WORD

‘RIP TO A LEGEND’

Eva Longoria, 46, shows off her stunning figure in a red bikini

Meanwhile, it comes shortly after Ashley and girlfriend Safiyya announced their decision to use the £1.6million raised by generous fans to set up a charity in Azaylia’s name.

The grieving couple say they have been forever changed by the “monster” that leukaemia-stricken Azaylia bravely fought against before it took her life at eight months old.

They plan to use the fundraising cash – most of which was raised in 24 hours – on helping others through charity work, as well as giving Azaylia the “magical” send-off she deserves.

In her short life, Azaylia touched millions across the world throughout her battle with an aggressive form of leukaemia.