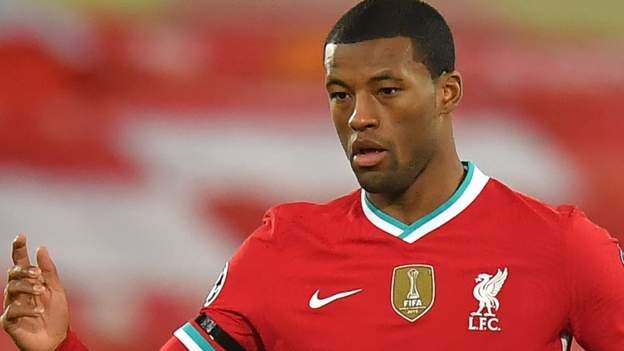 Liverpool boss Jurgen Klopp says he is “positive” about midfielder Georginio Wijnaldum’s situation and “would be happy” if he stayed at the club.

Netherlands international Wijnaldum’s contract with the Premier League champions runs out next summer and he can negotiate with foreign clubs from 1 January.

“As long as nothing is decided everything is possible,” said Klopp.

Wijnaldum has helped Liverpool win the Premier League, Champions League and Club World Cup during his time at Anfield.

He was linked with Barcelona in the summer but said he did not think the Spanish giants’ interest “was that serious”.

Wijnaldum has played in all nine of Liverpool’s league games this season, starting eight, and has also featured in their four Champions League matches.

“I would be happy if he would stay here,” said Klopp. “I am pretty happy with Gini as you can see when you look at most of the line-ups.”

Liverpool faced a similar situation with Germany midfielder Emre Can, who left the club to join Juventus when his contract ran out in 2018.

“[Can] played and he gave his absolute everything until the last day of his contract and Gini will do the same, no doubt about that,” added Klopp.

“There is no issue, no issue at all.”