NewsGroove Uk
NewsGroove Uk > Health > Are YOU anxious about going back to work? It could be alcohol withdrawal symptoms
Health

Are YOU anxious about going back to work? It could be alcohol withdrawal symptoms 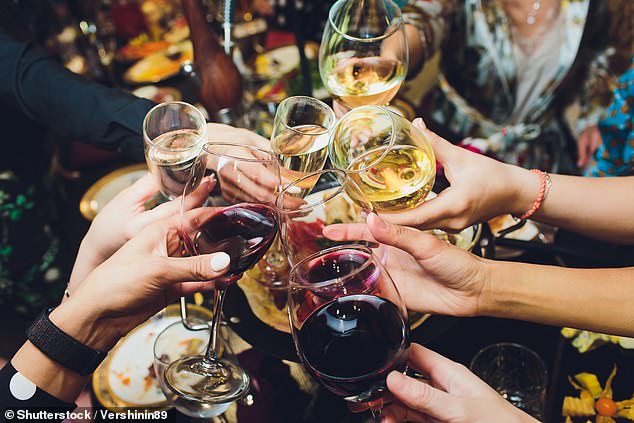 Are YOU anxious about going back to work? Doctor warns feeling sick and having the shakes could actually be alcohol withdrawal symptoms from drinking too much over Christmas and New Year

It’s time of the year that fills millions with dread – having to return to work after two weeks of drinking copious amounts of alcohol and over-indulging in chocolate.

But now a doctor has warned the tell-tale anxiety symptoms may actually be alcohol withdrawal symptoms, not the fear of going back to reality.

And he warned feeling sick, having the shakes or being irritable may be signs of the body experiencing withdrawal symptoms to such regular drinking.

But now a doctor has warned the tell-tale anxiety symptoms may actually be alcohol withdrawal symptoms, not the fear of going back to reality

Dr Wright said: ‘People up and down the country will now be feeling anxious about their impending return to work and may also be feeling sick, shaky and irritable.

‘However, far from concerns about the end of the Christmas and New Year period and the reality of work, the cause of this for many will be alcohol withdrawal symptoms following sustained heavy drinking.

‘For those who don’t realise this, drinking more to calm that feeling is very tempting – but it is also a great way to become addicted.’

Urging people to avoid turning to drink in an attempt to quell their symptoms, Dr Wright called for revellers to scale back their alcohol intake after New Year’s Eve celebrations.

He said: ‘Many people will have had a very intense festive period in which they will have consumed significantly more alcohol than usual which will undoubtedly affect their mental state.

‘The danger is that people don’t realise how the body will react to alcohol withdrawal and confuse it with anxiety about returning to work, which could then fuel more drinking.

‘It is essential to avoid that and people should also use the time to reflect and think about how to moderate their drinking habits over special occasions and holiday seasons.’

Data released earlier this year by NHS Digital showed there were more than 1.2million alcohol-related admissions to hospitals in England 2017/18.

While a study published in the journal Addiction showed 20 per cent of people admitted to UK hospitals were harmful drinkers and a further 10 per cent were alcohol dependent.

Dr Wright added that Dry January could be used by some as an excuse for drinking heavily the rest of the year.

He said: ‘While I appreciate the good intentions behind the Dry January campaign, it remains to me to be the perfect decoy for problem drinkers.

READ  Coronavirus: From home hygiene, to schools, food and friends, all the essential information you need

‘My preference, as I have maintained consistently, is that people need to be aware of their consumption all year round, aiming to stick at about 14 units per week with three to four dry days.’

‘What we can say for certain is that if anyone attempts a dry January and only manages a few days, they may have more of a problem with booze than they think and should seek help and support immediately.’

The NHS advise men and women not to drink more than 14 units a week on a regular basis – such as weekly – to avoid health risks.

For example, a bottle of lager would contain around 1.7 units, and a large glass of wine around three units.

Some surveys have suggested Britons drink around 25 units each day throughout Christmas, simply because of it being the festive period.

DO YOU DRINK TOO MUCH ALCOHOL? THE 10 QUESTIONS THAT REVEAL YOUR RISK

One screening tool used widely by medical professionals is the AUDIT (Alcohol Use Disorders Identification Tests). Developed in collaboration with the World Health Organisation, the 10-question test is considered to be the gold standard in helping to determine if someone has alcohol abuse problems.

The test has been reproduced here with permission from the WHO.

To complete it, answer each question and note down the corresponding score. 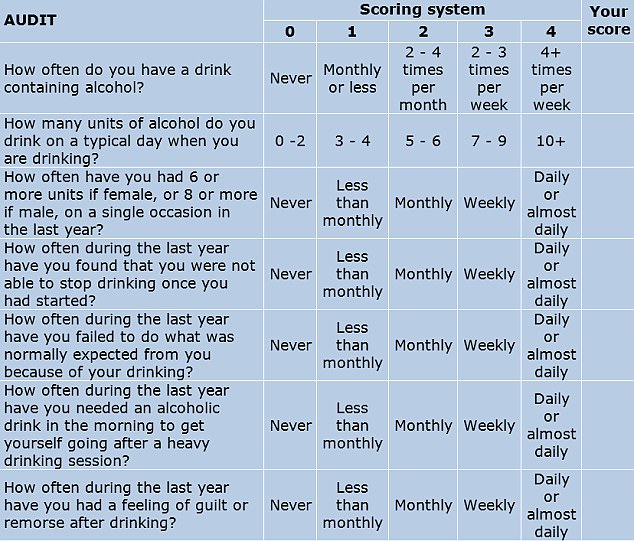 0-7: You are within the sensible drinking range and have a low risk of alcohol-related problems.

Over 8: Indicate harmful or hazardous drinking.

8-15: Medium level of risk. Drinking at your current level puts you at risk of developing problems with your health and life in general, such as work and relationships. Consider cutting down (see below for tips).

16-19: Higher risk of complications from alcohol. Cutting back on your own may be difficult at this level, as you may be dependent, so you may need professional help from your GP and/or a counsellor.

20 and over: Possible dependence. Your drinking is already causing you problems, and you could very well be dependent. You should definitely consider stopping gradually or at least reduce your drinking. You should seek professional help to ascertain the level of your dependence and the safest way to withdraw from alcohol.

Severe dependence may need medically assisted withdrawal, or detox, in a hospital or a specialist clinic. This is due to the likelihood of severe alcohol withdrawal symptoms in the first 48 hours needing specialist treatment. 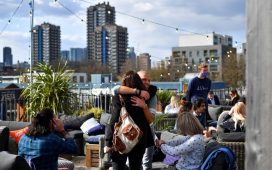 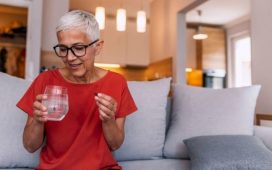 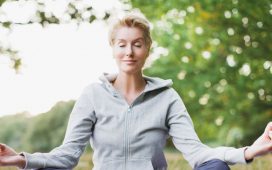