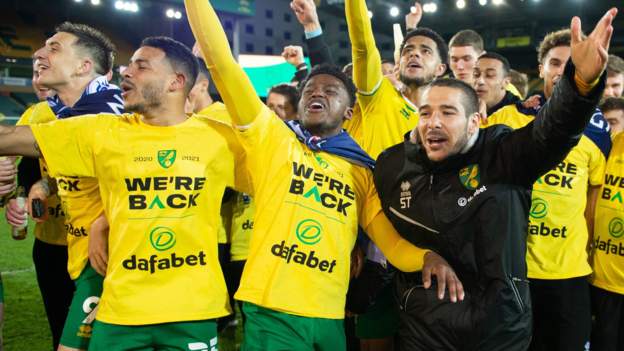 Casual observers of the Championship could perhaps be forgiven for thinking ‘here we go again’ as Norwich City sealed promotion to the Premier League for a fifth time on Saturday.

However, the Norfolk side have shown resilience to bounce back on each occasion and are this time likely to go up with more victories and points than ever before.

So are Norwich now better equipped to face the Premier League and are they ready to lose their yo-yo tag?

Case for the defence

Last season in the Premier League Norwich conceded an eye-watering 75 goals as they lost 13 of their last 15 games to finish bottom by 13 points.

But should we have been surprised? Daniel Farke’s side let in 57 goals – more than 16th-placed Stoke – on their way to winning the 2018-19 Championship title and were unwilling, or unable, to tighten up for the top flight.

This time around only second-placed Watford have a better defensive record, with 4-3 basketball games replaced by more measured 1-0 or 2-1 victories.

“This team is a much more difficult proposition to play against,” said former Canaries forward Darren Huckerby, who was part of the side that gained promotion in 2003-04.

Darren Eadie played more than 200 games for Norwich in the mid to late 1990s and says the “change in mentality” needed to survive next season is already happening.

“It was a learning curve for Daniel Farke and a lot of the players last time in the Premier League [but] they’ve been there now, they know what to expect.

“Before they were probably a bit uncertain as to what’s required – they certainly know now.”

Jack Reeve, founder of fan channel Talk Norwich City, says there is “less naivety” about the team now but thinks they will not lose their identity on the pitch.

“The all-encompassing attacking football we maybe saw in the Premier League, and certainly the last time we were crowned champions in the Championship, has changed,” he told BBC Radio 5 Live.

“Survival is the key but if you said to a Norwich fan ‘would you sacrifice the style of football for survival?’ they’d probably say no.”

Can Norwich keep hold of talent?

While most relegated sides struggle to turn around a losing mentality in the following campaign, the Canaries stayed calm and kept faith with head coach Farke and the nucleus of the squad that had taken them up the previous season.

Argentine playmaker Emi Buendia, midfielder Todd Cantwell, top scorer Teemu Pukki and right-back Max Aarons – who has been linked with Bayern Munich, Barcelona and Manchester United in the past year – all showed flashes in the top flight but stayed to help Norwich rise again.

“Some of them are going to go, this is inevitable,” Eadie told BBC Radio Norfolk.

“We’re a self-funded football club and the way you do that is by selling some of your players sometimes.

“The way the market is nowadays you’re going to get a lot of money for those players and if [sporting director] Stuart Webber can do what he’s done in the past he can probably get four or five players for that type of money – they can structure the squad and make it stronger.”

In recent years Norwich, co-owned by celebrity chef Delia Smith, have chosen to reinvest much of the money received from transfer sales into the club’s academy and training ground.

But there is a feeling that should the likes of Buendia, Cantwell or Aarons leave Carrow Road this summer, more money might be set aside for Farke to replenish his squad.

“I think we’ll certainly see one or two go. There’s definite talent in there who can go on to bigger and better things I’m sure,” Reeve said.

“But I think not only will we be able to keep the vast majority of players, there will be money there this time to reinvest that back into the team.”

The Canaries will secure the Championship title if they beat second-placed Watford at Carrow Road on Tuesday.

Norwich’s previous promotion was done in fine style, scoring 31 of their 93 league goals after the 75th minute, and although they have scored a far more modest 66 goals with four games to play, Pukki, Buendia and Cantwell have still been given the licence to be inventive in attack, as their 7-0 mauling of Huddersfield showed earlier this month.

“It’s worth noting last season in the Premier League we collected zero points in ‘Project Restart’ [when fixtures returned in June after the enforced coronavirus break] – we were embarrassing,” added Reeve.

“We might not stay in the Premier League next season [but] I think we’ve got much more of a chance than we had last time around – we will have learned lessons.”

And Huckerby also believes the team now have more about them.

“They took a bit of a hit last season, they’ve gone through that and they’ve come back stronger and learned from it,” he said.

“I think this will go down as Norwich’s best ever Championship team.”