Archaeologists have unearthed a secret Aztec tunnel that has been hiding under the bustling streets outside of Mexico City for more than 600 years.

Adorned with carvings and paintings, the passageway that dates back to the 15th century was  built by Emperor Montezuma I and linked to the god of water and fertility – Tlaloc.

The ancient discovery is part of 15 year-long conservation project around la Calzada de San Cristobal, which is home to a massive structure built by indigenous people hundreds of years ago.

The findings were announced by the Mexican Institute of Anthropology and History (INAH), which  noted that the wall was adorned with several rock carvings and statues, deeming them a ‘huge archaeological value in the city of Ecatepec de Morelos in the central Mexican state of Mexico’, as reported by Express.

Decorating the 27.5-foot long wall are 11 carved images and as well as what was once a wooden gate.

Other items found inside include artifacts made of glass, porcelain, majolica, in addition to remains of statues — there is a decapitated seated figure and what appears to be feet from another statue.

However, what excited archaeologists the most are the images linked to the Aztec god of water and fertility – Tlalo. 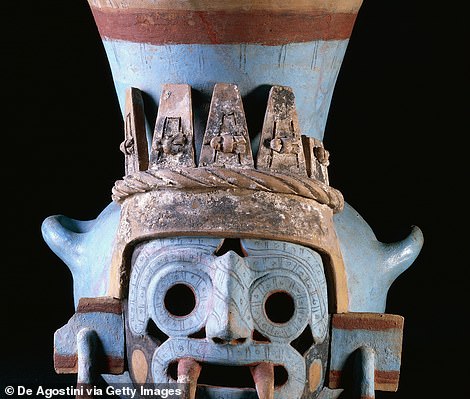 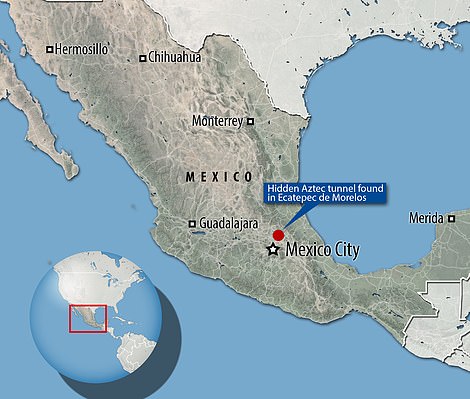 The tunnel chamber was discovered outside of Mexico city (right). Adorned with carvings and paintings, the passageway that dates back to the 15th century is believed to have been built by Emperor Montezuma I and linked to the god of water and fertility – Tlaloc (pictured left is a representation)

This ancient god is usually depicted with goggle eyes and fangs, and is often paired with lightning, maize and water in visual representations and artwork.

Although Tlalo is believed to be a giver of life, Aztecs feared this god because they believe he sent down hail and lightening and had the ability to poison their water sources.

The site in which the wall was found is part of a more than decade long conservation project around la Calzada de San Cristobal.

This tunnel was believed to have been built by the famed Aztec Empire Moctezuma I who is said to have brought social, economic and political reform to strengthen Aztec rule.

Moctezuma I, the second Aztec emperor, ruled from about 1440 to 1469, who was followed by Moctezuma, the emperor who first confronted — and succumbed to — Hernan Cortes. 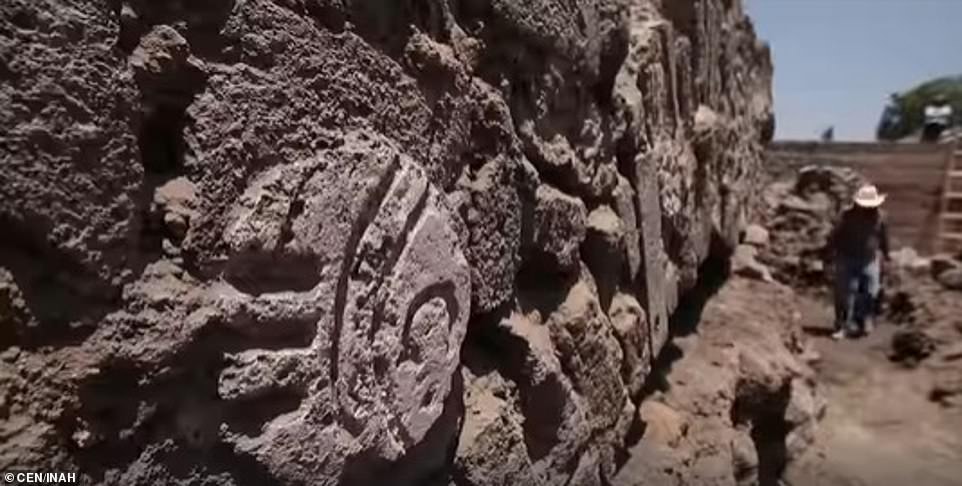 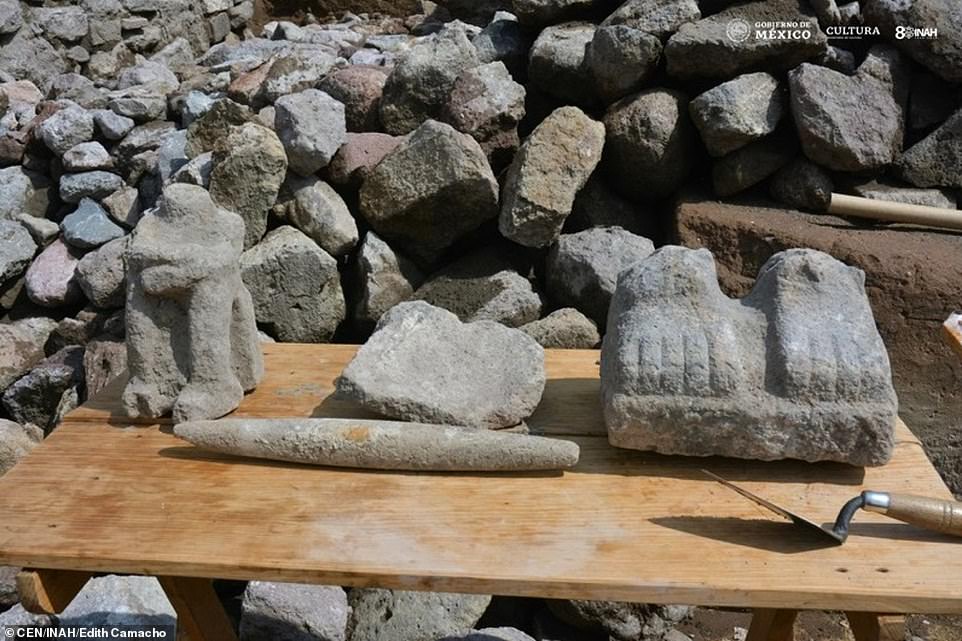 This tunnel was believed to have been built by the famed Aztec Empire Moctezuma I who is said to have brought social, economic and political reform to strengthen Aztec rule. Piece of statues were found inside of the tunnel such as feet and a decapitated seated figure

Aztecs were famous for their agriculture, introducing irrigation, draining swamps,and creating artificial islands in the lakes.

This civilization also developed a form of hieroglyphic writing, a complex calendar system and built famous pyramids and temples — they were also known for their cannibalism and human sacrificial rituals. 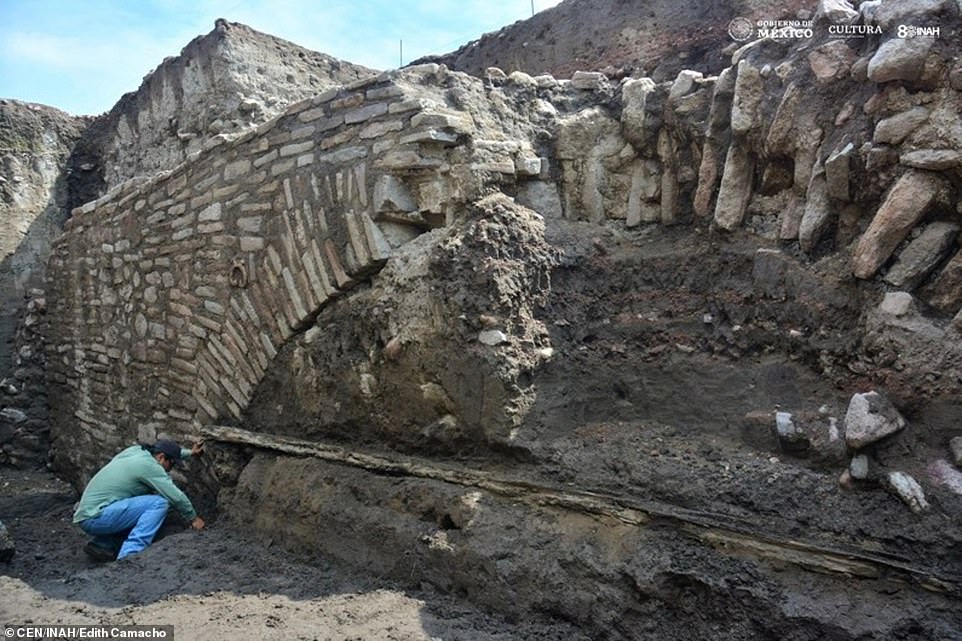 Aztecs were famous for their agriculture, introducing irrigation, draining swamps, creating artificial islands in the lakes and building intricate structures like

In May, archaeologists discovered the remains of more than 450 people at the ancient Zultepec-Tecoaque site in what is now modern day Mexico City. Experts say they were kept prisoner for six months, fed and then used in sacrificial enactment scenes from mythology.

They were members of a Spanish convoy from Cuba who reached Aztec territory in 1520, laden with supplies for Conquistador Hernan Cortes.

But they met a grisly end at the hands of their Aztec captors, who held them prisoner in doorless cells where they were ‘fattened up’ for sacrifice.

The Aztec inhabitants of Zultepec captured a convoy of about 15 male Spaniards, 50 women, 10 children and 45 foot soldiers in 1520. Over the next six months the town ate the prisoners – including toddlers and pregnant female ‘warriors’ whose heads were strung up on skull racks alongside their men. 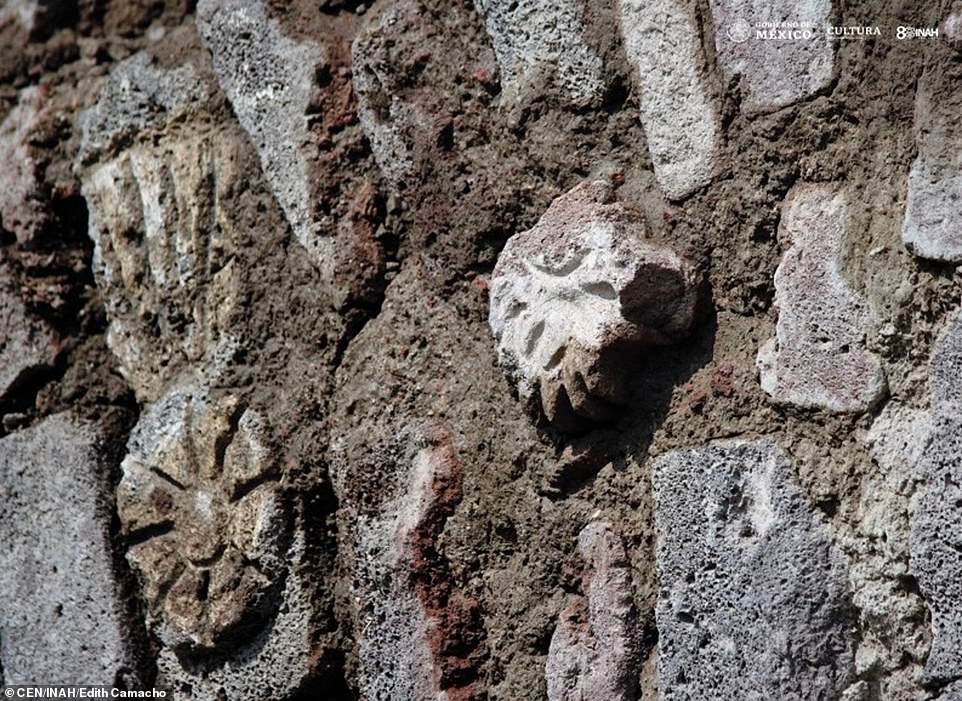 Adorning the 27.5-foot long wall are 11 carved images, as well as what was once a wooden gate. Other items found inside include artifacts made of glass, porcelain, majolica 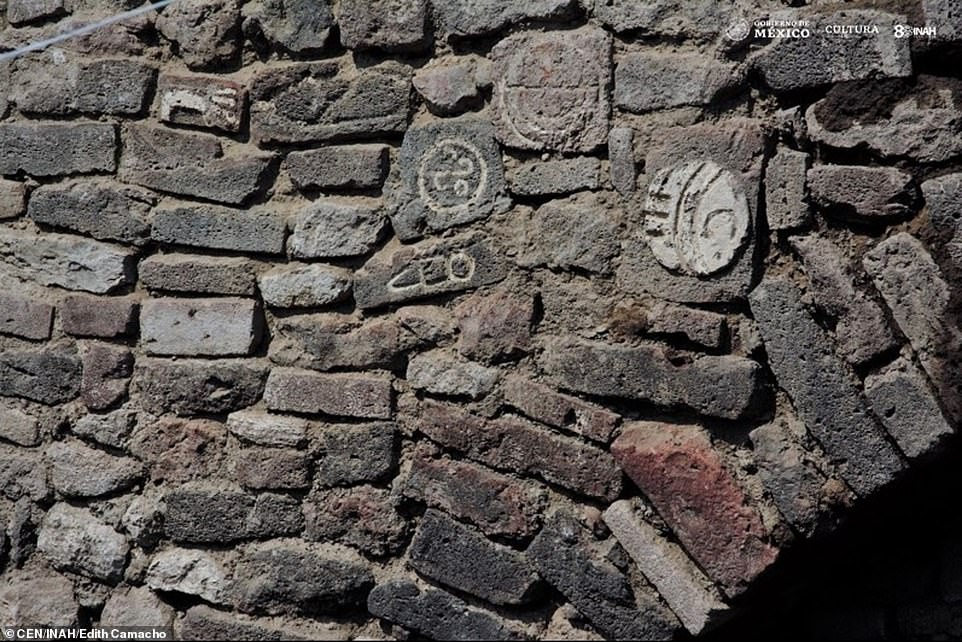 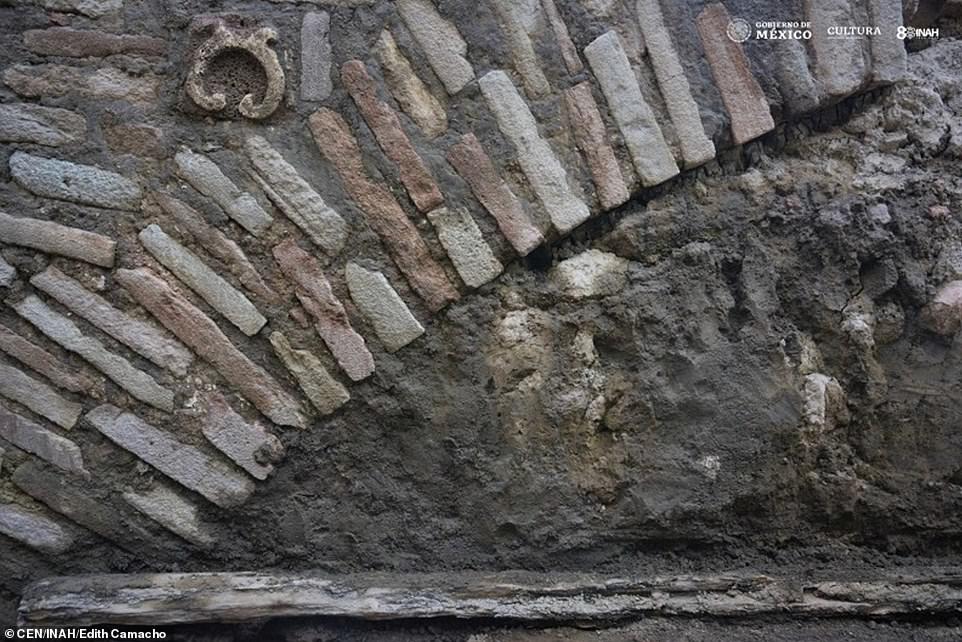 Archaeologists founds carvings around the tunnel, which suggest it was built in the 15th century

Archaeologists have hailed it one of the greatest victories for the indigenous population of Mexico during the invasion of the continent, but just one year later the Spanish conquered the Aztec empire and toppled its capital city – Tenochtitlan.

Two months before this gruesome discovery another was made that shows another dark side of this civilization.

A trove of Aztec sacrifices was discovered in downtown Mexico City that experts believe could lead to an Aztec emperor’s tomb.

The sacrificial offerings include richly adorned jaguar dressed as a warrior and a young boy, dressed to resemble the Aztec war god and solar deity.

The tunnel was first discovered by labor workers who were digging in the area in order to build a bus stop. The tunnel is more than 600 years old and was built by Aztecs 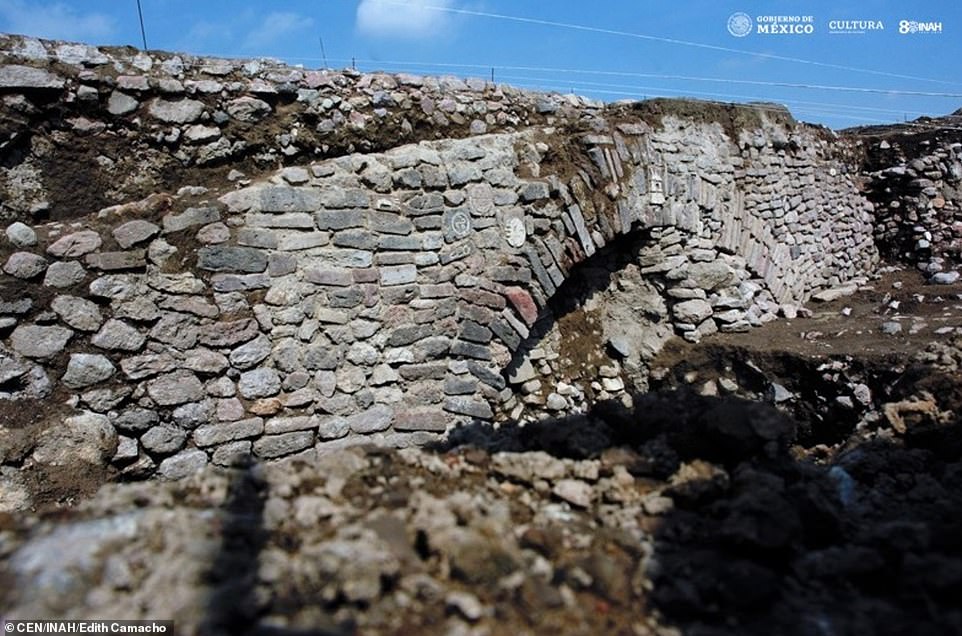 This tunnel was believed to have been built by the famed Aztec Empire Montezuma I who is said to have brought social, economic and political reform to strengthen Aztec rule

A set of flint knives elaborately decorated with mother of pearl and precious stones have also been recovered from the partially explored tomb.

Experts say it was once located in front of the temple where the earliest historical accounts describe the final resting place of Aztec kings, including Ahuitzotl.

Ahuitzotl, who reigned between 1486 and 1502 AD, was one of the greatest generals of the ancient Americas, according to historical records.

If confirmed as a royal burial this would mark a historical first since no such site has yet been found – despite decades of digging.

To many, Aztec people seemed ahead of their time, their culture was eventually be largely eradicated and the native people riddled with disease, spelling the end of their society.

WHO WERE THE AZTECS AND WHAT DO WE KNOW ABOUT THEM?

The Mexica, later known as the Aztecs, were a migrant people from the desert north who arrived in Mesoamerica in the 1300s.

This previously nomadic tribe was not welcomed by the local inhabitants who viewed them as inferior and undeveloped.

Legend says that, as a result the Aztecs, wandered waiting for a sign to indicate where they should settle.

In 1325 AD this sign, an eagle and serpent fighting on a cactus, was seen at Lake Texcoco – prompting the Aztecs to found their capital city, Tenochtitlan.

By 1430 AD the Aztecs had assimilated aspects of the surrounding tribes and developed into a structured society.

Their military became powerful and campaigns were fought and won.

The Aztecs went to war for two main reasons; to exact tribute and to capture prisoners.

They needed prisoners because they believed that the gods must be appeased with human blood and hearts to ensure the sun rose each day.

Conquering new regions brought the opportunity to capture slaves who were an important part of Aztec society.

Prosperity and unity within the Aztec peoples brought confidence. Under a succession of rulers armies were sent further across Mexico.

By the start of the 1500s the Aztec empire stretched from the Atlantic to the Pacific and into Guatemala and Nicaragua.

The arrival in 1521 AD of Hernan Cortés with Spanish soldiers brought about the end of the empire.